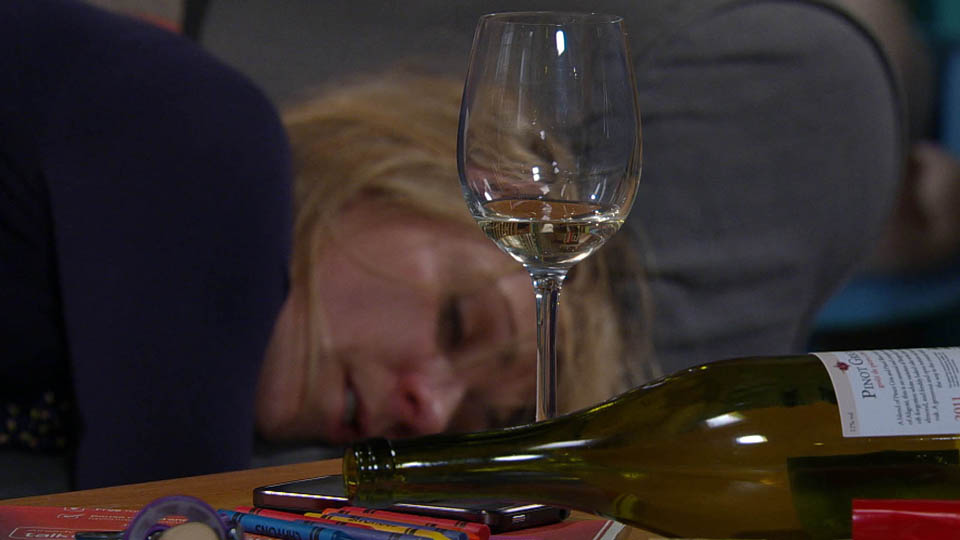 Welcome to our regular look at what’s in store for our favourite villagers, this coming week on Emmerdale.

Laurel chokes on her own vomit

Marlon and Laurel Dingle arrive back from their short break and Rhona is worried that Marlon is in denial about Laurel’s alcohol problem when he tells her that he’s handling things his own way.

Meanwhile, Jimmy is being badgered by Bernice to get the house in order or she’ll send a video of the mess to Nicola.  Tracy overhears and sticks up for Jimmy, even offering to help, but what’s in it for her?  It looks like she’s smelled an opportunity to lay on the charm and get herself a new job, but Bernice forbids it.  Tracy decides to break in to Mill and clean anyway, only to be disappointed when she learns that Jimmy has hired Laurel as his new PA.

Initially impressed by Laurel’s honesty about her drinking, Jimmy is soon having second thoughts when Jai gives her a poor reference and tells him that she was drunk at work.  It looks like Tracy’s luck is in as she is given the PA job instead of Laurel after all.

Laurel turns to the bottle for condolence and soon passes out on the sofa only to be found by April who tries to wake her, causing Laurel to cough violently as she begins to choke on her own vomit.  Arthur joins a panicked April, but the terrified pair are unable to rouse Laurel.  As Arthur runs to find Ashley, April calls for an ambulance.

Doug and Marlon arrive home to see Laurel being stretchered out by paramedics.  Will she survive and if so, what are the implications for Marlon?

Vanessa is pregnant, but whose is it?

Still feeling guilty about her one night stand with Adam, Vanessa is throwing herself into spoiling Kirin for his 18th birthday.  She decides to have a chat with Adam to clear the air and he’s relieved when she says there’s no need for any awkwardness between them.

She starts to feel queasy and even has to rush out of the vets in a panic when Rhona brings in a cat for neutering.   Later on, she pulls a pregnancy kit out of her bag and confirms her worst fears; she’s pregnant.  She confides in Rhona, who can’t help but ask if it could be Adam’s baby.

Vanessa’s head is in turmoil as she considers whether she can go through with the pregnancy or not.  It doesn’t help when she sees Marlon and his bond with Leo and is reminded that this could be her last chance at motherhood.  She decides she must tell Kirin, but ends up telling Adam instead, who agrees that he won’t say anything about their encounter and insists the baby isn’t his.  Vanessa then tells Kirin about the baby, asking him to keep it a secret, but will his excited fussing give the game away anyway?

Chrissie and Robert on the rocks?

Last week, jammy Ross gained £5k from Robert just after he’d told Chrissie that Robert set up his break in at Home Farm previously.  This week, Robert is terrified he’s losing Chrissie as the pair continue to argue.

Meanwhile, Ross tells Aaron that Chrissie knows Robert was behind the break in, leaving him hopeful as to what that could mean for him and Robert.  However, Lawrence is playing peacemaker and telling Chrissie she should forgive Robert for the sake of Lachlan who needs stability in his life.

Aaron makes the decision to reject Robert’s advances, telling him their affair is over.

Ali tells Ruby they need to leave the village to move closer to Sean, as Dan blames himself for what happened to him.

Chas is unhappy to see Lachlan in the pub.

Emma is suspicious of Ross’ bitterness towards Pete and Debbie’s engagement.

Belle finds out she’s not on the payroll at the factory.