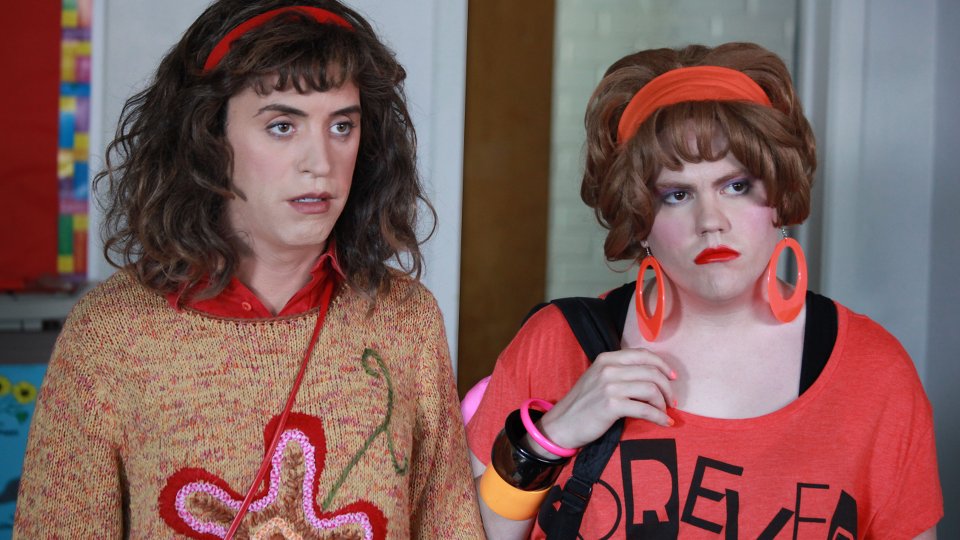 New girl Cassie (Brandon Alexander III) makes friends with social outcast Maggie (Dudley Beene) when she starts a new high school. After being shunned by the popular kids, led by Heather (Lauren Rose Lewis) and other Heather (Karli Kaiser), Cassie and Maggie embark on a mission to get into the in-crowd. As the girls navigate their way through the often murky waters of high school, the Heather’s and their boyfriends Brett (Leigh Wakeford) and Dirk (Michael Turchin) make it their mission to sabotage them at every step.

First Period is directed by Charlie Vaughn and written by star Brandon Alexander III. It’s a parody of 80s high school movies and is best described as Mean Girls meets John Waters. The film’s aim is to show you a good time and to make you laugh, it’s not trying to change the world and it’s not going to linger with you long after the credits roll. Making it clear from the outset that you’re watching a tongue-in-cheek comedy, First Period’s lead teenage girl characters are played by two men; Alexander and Beene.

Turning out every cliché you know, First Period pays homage to the high school movie genre with its tongue firmly planted in its cheek. The film knows that its ridiculous but it makes sure to embrace the viewer and take you on the ride with it. The plot will feel familiar and the narrative doesn’t offer up a whole lot in the way of surprises, but it will make you laugh a fair amount.

The success of the film comes down to the performances of Alexander and Beene. The two actors form a great ‘buddy’ chemistry and even when the film is at its most ridiculous, it still manages to hold your attention thanks to the two leads. Of the two Beene is the scene-stealer as the more socially aware Maggie. The introduction of Cassie gives Maggie a more care-free attitude as the film progresses and the way in which the characters interact reminded us of Romy and Michele’s High School Reunion. The supporting cast is pretty solid too. Lauren Rose Lewis and Karli Kaiser are perfect as the bitchy popular girls whilst Leigh Wakeford and Michael Turchin (Lance Bass’ husband) offer up comic relief and eye candy respectively.

First Period is a better movie than we were expecting. The thought of grown men pretending to be school girls did make us sigh a little but the movie is actually a very funny, and pretty sweet story. At the heart of First Period is a coming-of-age story about self-acceptance and learning that being popular isn’t all its cracked up to be. The movie will likely get a cult following, particularly from an LGBT audience and we think it will live on for years to come.