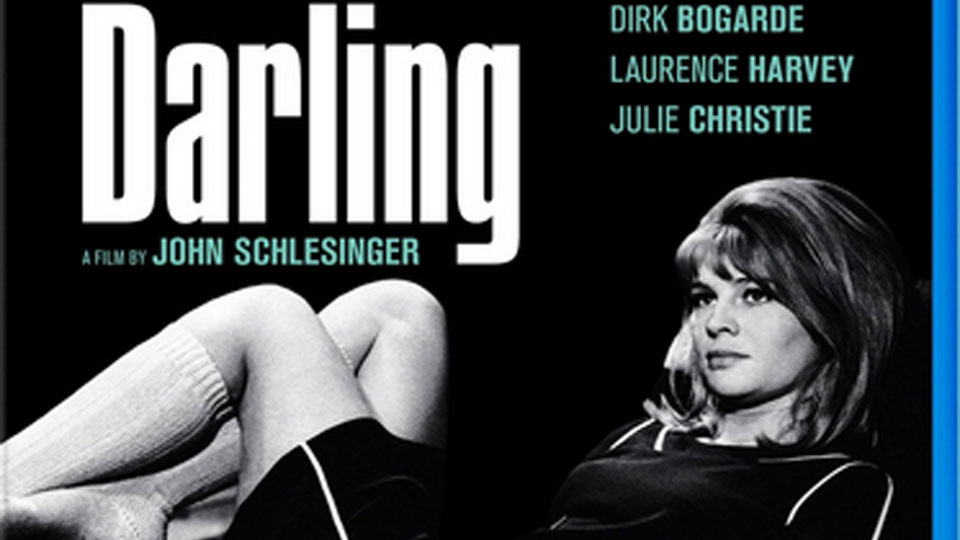 Happy 50th birthday to Darling, which is a British film rarity in more than one respect. Released in 1965, it is unusual for a movie of the era for having a strong female lead (even if Julie Christie’s billing comes behind that of Laurence Harvey and Dirk Bogarde); and it also features a gay supporting character who is perfectly normal and not full of angst or suffering from any psychosis (a brilliant performance by Roland Curram).

The man behind the camera is John Schlesinger, the British talent who at his best (Sunday Bloody Sunday, Marathon Man, Midnight Cowboy) was exceptionally good, and often ahead of the cultural zeitgeist. Darling must also rank as one of his better films. Schlesinger is reunited with Julie Christie, this time casting her in the lead role. Three years earlier Christie had offered excellent support in Schlesinger’s Billy Liar.

Darling follows the rise of the selfish, ambitious and hedonistic model Diana Scott (Christie) as she uses men to her advantage until she’s reached the top of the social and career ladders. When she meets leading TV academic Robert Gold (Dirk Bogarde) she shakes up his studious life and he leaves his family for her: only Diana has realised that oily advertising executive Miles Brand (Laurence Harvey) can get her a part in a movie – for a price.

Darling is a great film for its examination of the London and Paris social and arts scene of the 1960s, which Schlesinger does with some accuracy (debauched parties, casting couch arrangements) but always with his tongue in his cheek. Julie Christie is terrific as Diana Scott, and against the odds she creates a character you want to spend time with. It’s unusual to have such an unsympathetic lead, though Diana Scott (who won Christie the Academy Award for best actress) shares the same lineage as Scarlett O’Hara – you admire her even if you don’t like her.

Terrific support is provided by Dirk Bogarde, who was in his 40s by the time and gradually winning rightful acclaim for detailed character performances. He plays Robert Gold to his strengths, accentuating his doe-eyed, stuck-up resentment and suppressed anger. There’s even convincing chemistry between Bogarde and Christie – romance elements never one of Bogarde’s strengths. It’s Roland Curram as Christie’s photographer and friend Malcolm who impresses the most. He plays gay with great accuracy, resisting broad stereotypes, yet embodying a young and carefree gay man with complete conviction – at a time before homosexuality was decriminalised in the UK. The scenes in Capri with Christie and Curram are amongst the best in the movie, and Curram’s is a performance way ahead of its time.

Darling is a great film, but not a perfect one. Laurence Harvey was never a notably good actor, and he is as dry and unappealing in Darling as he was in any other movie he made (he’s best-remembered for Room at the Top). Despite top billing, the blessing is that he’s probably in the film less than Bogarde, and certainly less than Christie, so his stilted performance isn’t a major hindrance. There’s also the curious issue of the film’s narration. First person voiceover from Christie occasionally interrupts the action, though since there’s never any obvious reason the audience should be directly addressed, it feels incongruous and doesn’t add anything to the film. It could also be argued that the plot meanders, allowing for beautiful location filming as Christie takes herself off to Capri; but since it’s entirely character-driven and focussed the structure works.

The Blu-ray release offers a sharp and fairly clean viewing experience. There is a grain to the picture, but this is likely to be as a result of the film stock used at the time. There are a few lines on individual frames that haven’t been ironed out by restoration, but overall a fifty year-old film looks in pretty good shape. There’s an original theatrical trailer with no restoration on the limited extras by means of comparison.

Overall, Darling is a thoughtful, intelligent film that encapsulates the new ethos of liberalism that developed during the 1960s.

Watch the trailer for Darling below: