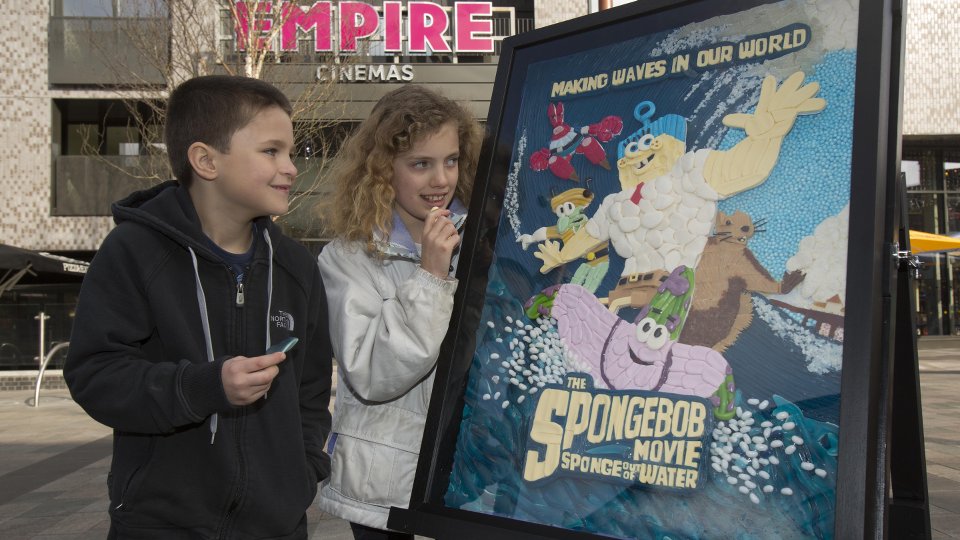 Empire Cinemas has collaborated with renowned food artist Mark Northeast to create the UK’s first ever film poster made entirely out of pick ‘n’ mix to celebrate the release of The SpongeBob Movie: Sponge Out Of Water.

The artwork was unveiled yesterday at Empire Cinemas Walthamstow and will remain on display at the cinema for the week. It features the nation’s favourite sweets and uses 24 different types of pick ‘n’ mix and over 400 individual sweets including; 90 foam bananas, of which 60 were used for the lettering, 60 fried eggs, 60 shrimps, 25 pieces of fudge, 50 blue dolphins, 10 strawberries and many more tasty treats available from the pick ‘n’ mix counter at Empire Cinemas.

Mark Northeast, owner of Creative Food Design said, “This has to go down as one of the largest and most fun I’ve undertaken. The preparation was key and from the outset, I visualised how the image would take shape. The plan was to layer the different characters at varying heights in order to achieve a sense of depth to the picture.

“One of the toughest elements of the project was trying to cut and shape the 24 different varieties of sweets to use them in the picture. Some are brittle and can snap easily while others were incredibly chewy. Where possible I tried to use the sweet in its original form, but some improvisation was necessary – for example, removing the yolks of about 80 fried eggs so they laid flat on the picture. Each of the 90 bananas that were used had to be cut down in thickness to make them suitable for the letters and SpongeBob’s body.”

Empire Cinemas’ 17 locations across the country stock over 40 types of pick ‘n’ mix for their customers, as well as a range of other tasty treats to enhance the movie experience, both hot and cold.

Jon Nutton, Marketing Director of Empire Cinemas, said: “We’re delighted to unveil the tastiest movie poster in history sourced from our very own pick n mix counter, and what better film to launch Empire Cinemas’ sweet art than The SpongeBob Movie: Sponge Out Of Water. At Empire Cinemas, the customer experience is at the heart of everything we do, from the visual delights to the tempting treats on offer.”

The SpongeBob Movie: Sponge Out Of Water opens in Empire Cinemas from 27th March 2015.

In this article:Empire Cinemas, The SpongeBob Movie: Sponge Out of Water