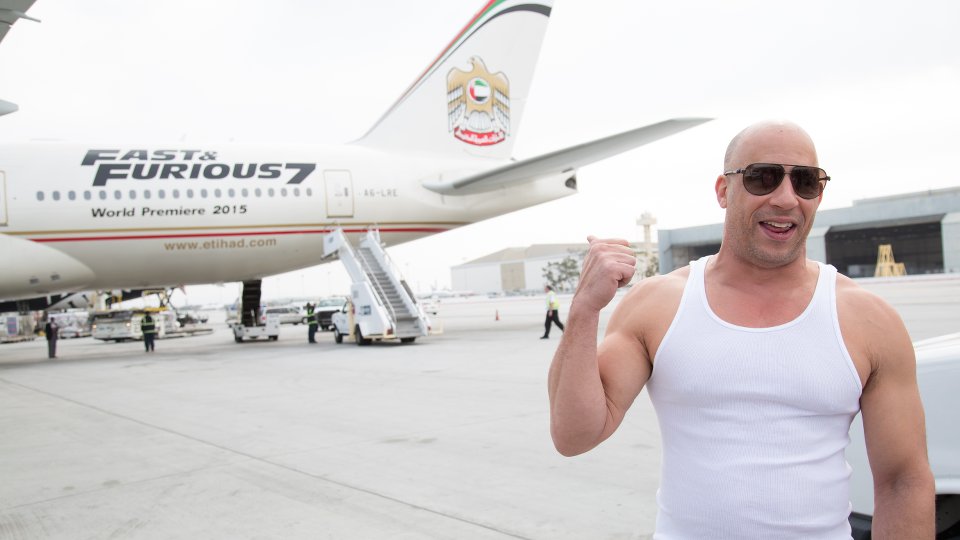 Part of Fast & Furious 7 was filmed in the United Arab Emirates with Abu Dhabi a key location for the movie.

“Etihad Airways is one of the fastest-growing airlines in the world with a strong history of culture and innovation and a commitment to reimagining the travel experience for our guests,” said Peter Baumgartner, Chief Commercial Officer of Etihad Airways. “We are pleased to work together with Universal, an organization that shares that same spirit of innovation and reimagination when it comes to the world of entertainment, to unveil our newly-decaled Boeing 777 aircraft in support of the Fast & Furious franchise and Fast & Furious 7, which premieres next month and highlights our airline’s home of Abu Dhabi.”

“When we began filming The Fast and the Furious in 2000, if you told me that we would one day have our logo on a wide-body jet, I would have said you were crazy,” said producer Neal H. Moritz, who has shepherded all seven films in the series. “We are so honored that Etihad has partnered with us to support this very personal film, and we thank the people of the United Arab Emirates for all the kindness and graciousness they showed throughout production.”

Fast & Furious 7 is released on 3rd April 2015. See footage from the event and a new featurette for the movie below: