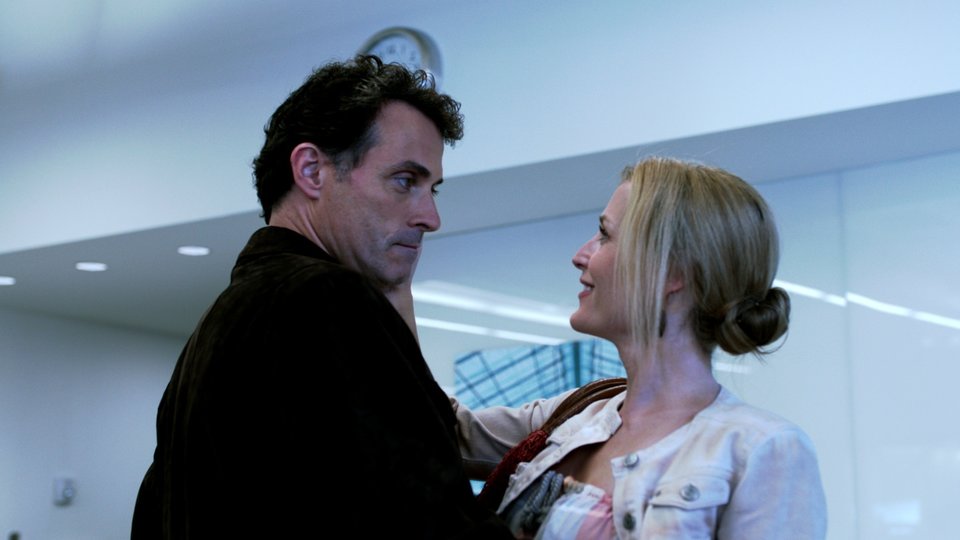 Marika (Gillian Anderson) and Gabriel (Rufus Sewell) are a married couple that spend their lives researching controversial areas of physics. Until one day, when everything changes… Gabriel mysteriously disappears whilst on a business trip, leaving Marika and their son Erol (Haley Joel Osment) alone and confused. Years later Erol makes a bizarre discovery that could uncover what happened to his father. He must risk everything they believe about the universe to change the parameters of reality forever.

Continuum, or as the non-UK title ‘I’ll Follow You Down’, instantly sets out to say that it’s a time travel science movie. It is going to make you think about physics and wormholes and what might happen if we changed previous moments in life to see how they would react in the future. There are some mind-bending calculations thrown around very early on that whilst not explained fully do go some way to giving the movie a lot of credence in the official circles that it wants to operate.

It creates an intriguing opening half hour. But the mechanics do not last – instead it gives way to a family drama. This is where all of Continuum’s excellent first half-hour comes undone as it reverts to a typical Saturday afternoon melodrama with the occasional nods back to the mechanics of science.

As the film shifts to focus on Erol it’s tough not to get frustrated with the character. Erol’s constant whining over the loss of his father doesn’t appear to affect his school work but it does inhabit his relationship problems – almost picking and choosing when to shoe-horn in his life problems. His want and need to find his father boarders on obsessive. Then like a time-travel flash, the final third reverts to aspects of science and the mysteries of the disappearance. Once again, this pulls the film up to something akin to interesting, only for it to fail with an ending that cops out of everything.

In a film filled with recent stars, Gillian Anderson looks comfortable. Osment struggles with heavy dialogue and tender emotional moments; it’s difficult to warm to him as he never gets the character quite right. Sewell has little to do apart from be a posh voiced long lost father with minimal screen time.

Continuum finds itself flawed by the hokum of a family drama when instead it should have focussed solely on the physics of time travel and let the relationships progress gradually.

In this article:Continuum, Gillian Anderson