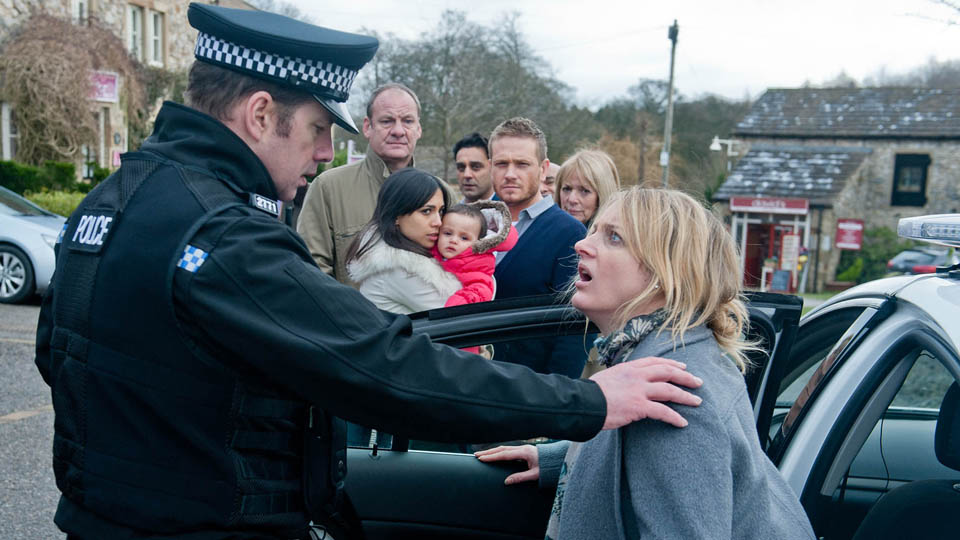 Welcome to our look ahead to what’s happening in Emmerdale this week.

After Jimmy went all out at the B&B to inject some romance into his relationship, Nicola was feeling good about herself until she thought a hot guy was giving her the eye only to find out that she reminded him of his mother.  Mood kill!  What frame of mind has that left her in?

This week she offers to take baby Amba for a walk, but as the rain pours down, Priya starts to worry where Nicola has got to.  She over hears Jimmy and Bernice discussing Nicola’s early menopause and begins to panic that Nicola has done a runner with Amba.  She’s soon on the phone to the police.

Meanwhile, James arrives at the barn and is stunned to find Nicola and Amba inside.  Nicola had gone into the barn to shelter from the rain and some how managed to get locked in and with no phone battery she couldn’t alert anyone.  Will Priya and the police believe her story and how will she feel when she hears that Jimmy has been doubting her?

He’ll have to call in the top guns to win her back!

How far will Lachlan go?

Chrissie is worried for Lachlan and initially confides in Robert that she thinks he might be gay.  She’s further concerned when she finds a scarf in his bag and he covers as to who it’s for.  Lachlan gifts Alicia a posh handbag anonymously, but David has his suspicions and heads to Home Farm and warns Lachlan off before heading back to the shop and telling Alicia who her mystery admirer is.  Alicia is annoyed that David had a go at Lachlan and heads to Home Farm to give back the bag and make sure he’s ok.

Later in the week, David arranges pre-birthday celebrations for Alicia, but has to take Amba to the hospital with Priya causing Lachlan to panic when he overhears, as he’s sabotaged David’s van.  Alicia and Leyla are enjoying a few drinks in the Woolpack and getting a bit tipsy.  As Alicia heads home, she tells Lachlan that he should shut the shop early and make her some coffee.

Meanwhile Chrissie finds Lachlan’s camera and is perturbed by the images she finds.  Just what is Lachlan capable of?

She made a dramatic reappearance in court confirming that she was in fact still alive and well, but it seems her stay in the village could be a short one as this week Rachel is offered a job in Luton.

Rachel says her goodbyes whilst love rival Tracy, tells an uneasy Sam it’s for the best that she’s going.  Ali’s upset and emotional to see her sister go and appeals to Sam to get Rachel to stay, leaving Sam all confused.  Megan is shocked to hear that Rachel is off, but can’t bring herself to tell Jai.

Rachel and Archie head off, but is this the last we’ll see of them or will they be back sooner than we think?

Aaron gives Chas the birthday present she wants by ending things with Robert.

Cain lies to Moira when he takes Noah to visit Charity in prison.  Will Charity feel the same about Cain as she did before being sent down?

Eric turns handyman to get the B&B ship shape before they are judged for upcoming awards.

Tracy uses underhand tactics to try and get what she wants.