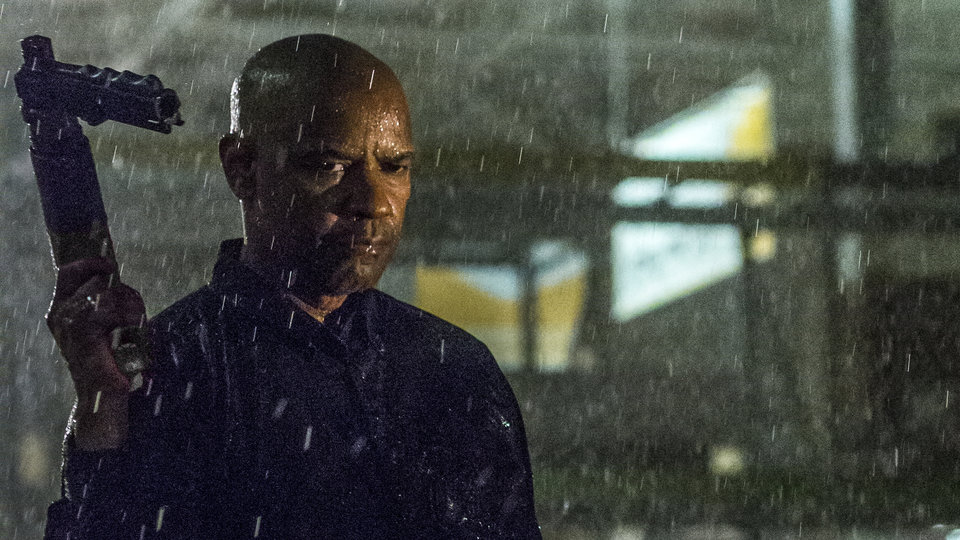 Robert McCall (Denzel Washington) is a man who quietly goes about his business. He works at a large DIY store and spends his evenings reading. Sometimes he has trouble sleeping and goes to a local 24-hour diner to unwind. There he meets Teri (Chloe Moretz), a young working girl who regularly comes in for coffee. She is stuck in a bad situation with Russian gangsters and before long Robert can’t ignore the situation any more. He decides to help the girl out and this reveals elements of his mysterious past that he vowed to never revisit.

The Equalizer was one of the most well-loved of 80’s action dramas. Starring Edward Woodward, it focused on gritty and realistic drama with New York City providing a beautifully fractured backdrop for the stories. This reboot barely resembles the TV show in that respect but that’s a good and a bad thing.

The very essence of a good reboot is to re-imagine the concept for contemporary times and The Equalizer does this exceptionally well. But the original concept of the show could have also worked very well on the big screen. When this was first touted as a movie, names like Liam Neeson and George Clooney were loosely attached for a film that could have resembled The American in terms of style and tone. These iterations never came to pass and instead Training Day and Olympus Has Fallen director Antoine Fuqua stepped in for a more visceral action movie that does justice to Richard Wenk’s involving script.

Denzel Washington comes back to hard action in a role that he fully embraces. He is positively magnetic onscreen and makes The Equalizer work thanks to a cool sense of authority, his undeniable screen presence and even his dab hand at situation comedy. He’s a very charismatic guy and sells every aspect of McCall’s life well. But he really comes into his own during the many tremendous action sequences in the movie. The first time McCall takes on a room full of bad guys, something very special happens – it’s one of the best action set-pieces you’ll see at the cinema this year.

Having a great working relationship with Fuqua clearly helped too as they both bring out the best in one another. Washington handles the drama and inner turmoil of the character well with Fuqua knowing exactly how and when to unleash Washington for maximum effect. Their collaboration has crafted a strong backbone to the movie and gives The Equalizer it’s most engaging elements.

The supporting cast are all solid with Chloe Moretz stealing her handful of scenes as a young woman caught in an impossible situation. We actually could have done with seeing more of her in the film as her role is noticeably short on screentime. Justified regular David Meunier is very entertaining as Slavi whilst Marton Csokas is always willing to match Washington for deadly menace as Teddy. Bill Pullman and Melissa Leo also show up in strong but brief cameo roles.

As with all action movies, there are a few leaps of faith that you need to take and some logic needs to be left at the door. But taken for what it is, The Equalizer is an immensely enjoyable and exciting action-drama that doesn’t disappoint. There’s a good nod to the original series at the end of the film too and this hopefully means that we’ll see Denzel Washington reprise this role. Time will tell, but for now The Equalizer sits easily one of the most entertaining and engaging action films of last year.