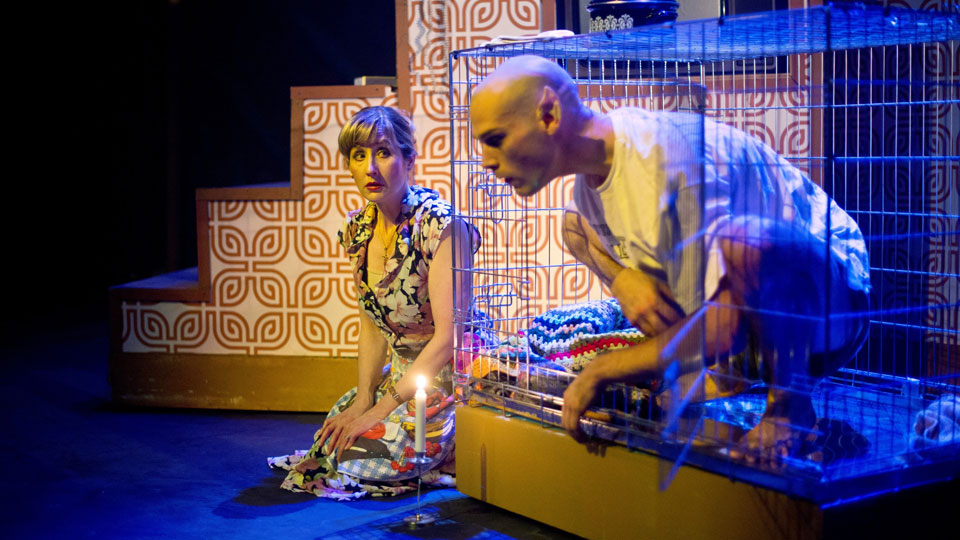 Three teenagers in Hope Falls, West Virginia, stumble across a creature living in a cave beneath the town. Humanoid, but with bat-like characteristics, nobody knows quite what to do with the creature, and he ends up in the care of the local vet Dr Parker and his family.

Bat Boy is a quirky, funny and highly imaginative musical, with some belting rock-based songs played live by a five-piece band. We were impressed by Stewart Charlesworth’s design, which manages to evoke the show’s sense of fun as well as being highly versatile to cover movement between multiple locations. Clever use is also made of projections, which provide everything from supporting the design by lending a sense of place, to news footage and even a sex-education video (you’ll have to see the show for an explanation).

Luke Fredericks’ production plays out with its tongue firmly in its cheek, but the mistreatment of Bat Boy is also a comment on how society, in this case specifically pious hypocritical Christian society (which even has its own song), treats outsiders and difference. The show satirises the secrets, lies, and inherent bigotry of small town mentality, especially through the character of the Reverend Hightower (a hilarious performance by Simon Bailey) and the trailer trash mother of the teenagers (Bailey again, and every bit as funny).

We enjoyed all of the performances, but special praise has to go to Rob Compton as Bat Boy for the sheer physicality of his portrayal, especially in the first act when his bat characteristics are at their height. Compton also skilfully handles the gradual transition of Bat Boy as he matures throughout the show. The family unit of the Parkers is also well-played, with Matthew White impressing and in fine voice as the sexually frustrated, jealous husband, alongside Lauren Ward as the seemingly pure all-American wife, and Georgina Hagen as their plucky but principled daughter Shelley.

With unremitting songs, visually impressive set-pieces and on-target jokes, it’s easy to be swept along by Bat Boy and ignore some of its problems; but a critical eye requires it to be stated that structurally, the story is a mess. The ingeniously-used projections later overstep the mark, with crucial plot points relayed through expositional backstory in a way that, although self-referentially daft, doesn’t cut the mustard as it feels cheap. The various twists and turns (the most important of which 99% of the audience will see coming a mile off) leave a retrospective look back over the story an unrewarding experience, as you’ll realise that characters’ actions and motivations don’t make much sense in the light of later events and revelations. The story also goes along routes of murder and incest that aren’t followed up satisfactorily, and there’s a whole scene introducing Mother Nature that, whilst very funny, isn’t needed. The Pygmalion aspects of the story are much better handled, and more focus on those areas would have provided a stronger structure and a more satisfying journey for the audience to follow.

Despite the muddled plot, there’s a lot to enjoy about Bat Boy in general, and this exuberant production in particular. You’ll likely leave the theatre singing Hold Me, Bat Boy to yourself, which is the catchiest of the musical’s numbers. If you’re up for something offbeat, funny and endlessly entertaining, Bat Boy is well worth a visit.

Check out our interview with the star of the show, Rob Compton.