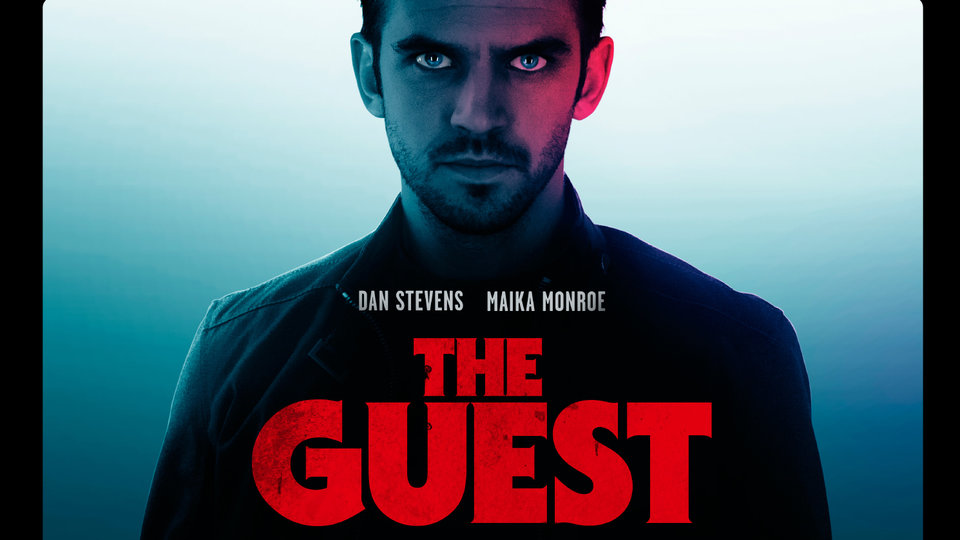 After their son died whilst on active duty in the Army, the Peterson family get an unexpected visitor. David (Dan Stevens) appears at their door one day claiming to be one of their son’s closest friends. He talks the talk and before long has engrained himself with the family. His charm and manners impress the parents whilst his big brother approach fits in perfectly with the youngest member of the family, Luke (Brendan Meyer). But the older daughter Anna (Maika Monroe) has her suspicions and questions his motives. Before long, she uncovers a shocking secret about David that could be potentially fatal to her family.

Adam Wingard is no stranger to horror and for his latest project he directs Simon Barrett’s dark, twisted and very funny black comedy/thriller to near perfection. The Guest is a film that knows exactly how to play to its strengths with scenes constructed with impressive visual flare and a knowing sense of circumstance. This is a great homage to the thrillers of the 80s, whilst adopting a quite brilliant soundtrack that echoes movies like The Terminator. Throw in the fact that this is set at Halloween and you have a perfect mix of thrills, chills and nervous laughter.

The stars have aligned for Downton Abbey alumni Dan Stevens and The Guest gives us the clearest picture yet that this guy is going to be the next big thing in Hollywood. With bags of charm and a hauntingly effective charisma, Stevens is front-and-centre throughout and leads this movie exceptionally well. He effortlessly sells an American accent, shares a wonderful chemistry with all of his co-stars and he does it all with a devilish twinkle in his eye. The bar scene alone is worth the price of admission.

The supporting cast are all excellent too. Character-actor Leland Orser (perhaps most recognisable as Liam Neeson’s go-to guy in Taken) does a stellar job as the hapless head of the Peterson family, with Sheila Kelley playing his distraught wife with believable angst. Ethan Embry shows up in a scene-stealing cameo as does Lance Reddick and Joel David Moore.

The character of Luke could have been quite clichéd but Brendan Meyer does a great job distancing himself from all of the usual trappings of being ‘a kid’ in a horror/thriller. Instead, his exchanges with Stevens are meaningful and completely believable. But it’s Maika Monroe (looking like a young Gwen Stefani/Brittany Murphy) who gives the role of Anna real substance and presence. Her constant suspicion of David is perfectly balanced against her obvious attraction to him (the shower scene is a brilliant example). She shares a wonderful chemistry with him and the two really sell the premise well.

The Guest is an utter delight from start to finish. With a devilish charm and bags of style, it’s not only a gripping thriller but a hilarious black comedy to boot. With great homage paid to 80s cult classics and a mesmerising soundtrack, The Guest is a complete success and one that deserves a huge audience. And this is, without doubt, the first step in Dan Stevens rise to movie super-stardom.