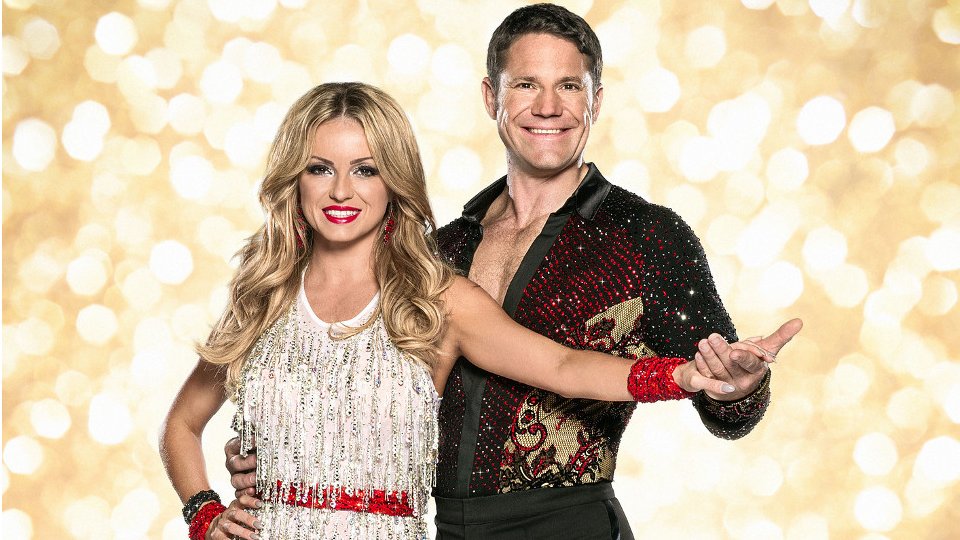 Strictly Come Dancing 2014 continued tonight as the 8 remaining couples danced to secure their place in the competition.

Last weekend Judy Murray finally left the competition with her partner Anton Du Beke after failing to impress in Blackpool.

Tess Daly was joined by Claudia Winkleman tonight after the co-presenter had to miss the last three weekends due to an incident that landed her daughter in hospital. It was good to have her back on the show and we’re glad her daughter is doing well.

Keep reading to find out how everyone got on…

Naturalist Steve Backshall has been climbing back up the leaderboard the past two weeks after a rough spell in the competition. He’s definitely one of the weaker celebs still in the competition so he really needed to up his game tonight to get back in the safe zone. Tonight Steve and his partner Ola Jordan danced the Jive. Was it a show-stopping performance?

The dance: Not a great start to the show. Steve really lacked the energy and precision that the Jive requires and at times he looked a little lost. Ola did her best to save the performance but we think he’ll be in trouble tomorrow night.

The comments: Len said he was surprised how well Steve performed tonight but told him there were a few things ‘suspect throughout the dance’. Bruno said Steve attacked the Jive and he liked the theme but told him his timing was off throughout. Craig said it was ‘all very stompy’ and ‘flat-footed’ and told Steve that the timing was ‘atrocious’. Darcey said that Steve has the ability to get it right but commended the way he handled Ola.

TV presenter Caroline Flack returned from the dance-off fighting last weekend in Blackpool. Her Jive pushed her right back up the leaderboard and ensured that she sailed through to this week. Tonight Caroline danced the American Smooth with her partner Pasha Kovalev.

The dance: If it hasn’t been for that slip at the start that could have been one of Caroline’s best performances to date. She recovered well but it did affect her timing ever so slightly. Regardless it was still a great performance.

The comments: Bruno said ‘the lady is a vamp’ and told Caroline she oozed sex-appeal before saying he would love to see the routine again. Craig said that Caroline made a great save when she almost stumbled and told her it was ‘classy’. Darcey told Caroline she was ‘very brave’ and told her she pulled the performance off with ‘a lot of style and a lot of flair’. Len said Caroline ‘drifted across that floor like smoke through a keyhole’ but told her he would have liked more in the Foxtrot hold.

Pixie Lott has impressed pretty much throughout the competition and achieved her highest score last week for her Tango. During the week Pixie took her partner Trent Whiddon with her to an awards show. Tonight Pixie was hoping for full marks for her Charleston.

The dance: Well Pixie gave it her all but that wasn’t really a Charleston for us. It was more show-dancing than Charleston. There’s no denying she danced it well but we didn’t love the performance.

The comments: Craig said that Pixie danced with ‘precision and exactitude’ and told her he was ‘dumb-founded’ by the amount of detail. Darcey said that she has never seen anyone fit so many steps into one dance and commended the detail of the performance. Len said it was ‘full of razzle dazzle and sparkle’ with loads of attack. Bruno said it was like ‘a firework display’ and told her ‘fantastic’.

Mark Wright had another great week last week when he performed the Charleston with his partner Karen Hauer at Blackpool’s Tower Ballroom. He’s really on a roll at the moment and he’s really won the judges over. Over the course of the week Mark took Karen to Tenerife whilst he filmed for Take Me Out: The Gossip. Tonight Mark and Karen danced the Tango.

The dance: Another strong performance from Mark this week! He’s really proving himself to be an all-rounder in the competition and the audience gave him a standing ovation. Colour us impressed!

In Blackpool Frankie Bridge and her partner Kevin Clifton opened the show with a Quickstep. They got a great reaction from the judges and Frankie was back up the leaderboard. In training Frankie struggled with the spins in her routine and worried that she might get sick during the performance. Tonight Frankie and Kevin danced the Viennese Waltz.

The dance: Well Frankie wasn’t sick! It was a nice routine. It didn’t have the wow factor but it was a lovely performance. We don’t think Frankie and Kevin will be in danger this weekend.

EastEnders star Jake Wood was back in the game last week after a show-stopping performance. During training this week, Jake and his partner Janette Manrara took a break and headed to Albert Square to tour the EastEnders set. Tonight Jake and Janette danced the Samba. Was it another strong week for Jake?

The dance: Wow! Jake is fighting for his place on the show isn’t he? That was a wild performance and it definitely captured the spirit of the Samba. We think he’ll be safe tomorrow night.

The comments: Bruno called Jake ‘a twerking wonder’ and told him it was ‘mental fun’. Craig said the rolls didn’t go anywhere but told him his ‘bottom went off like a jackhammer’. Darcey called Jake ‘a box of surprises’ and burst out laughing as she commented on his twerking. Len said ‘shake and bake Jake’ and called it a ‘wamba of a Samba’.

Sunetra Sarker found herself in the bottom two during last weekend’s Blackpool show. The judges told her she was struggling with her routine but thankfully she was dancing against Judy Murray so she sailed through. Tonight Sunetra and her partner Brendan Cole performed the Waltz.

The dance: Sunetra was back on form tonight. She’s always been more comfortable in the ballroom and we loved the performance. She moved effortlessly and gave a stunning performance.

The comments: Craig said that Sunetra is better in the safety of Brendan’s hold and called the performance ‘gorgeous’. Darcey said that Sunetra glided across the dancefloor but told her she came unstuck at times. Len said he liked the feel of it, the pivots and the romance of the performance but told Sunetra it was a little shaky. Bruno told Sunetra she was ‘so elegant’ and told her that her turns and body contact were better.

Blue star Simon Webbe was the last to dance tonight. Over the past couple of weeks he’s really upped his game and emerged as one of the strongest male celebs in the competition. Last week he did the first Argentine Tango of the series and he topped the leaderboard. Tonight Simon and his partner Kristina Rihanoff danced the Salsa.

The dance: A really great way to end the show. It wasn’t the cleanest Salsa we’ve seen but Simon really attacked it and it looked like he had a lot of fun.

The comments: Darcey said it was scary how comfortable Simon looked but told him he was a little over-excited at points. Len said that the week after Blackpool is usually flat but that tonight was great as was Simon’s performance. Bruno called it ‘sizzling, spicy and hot’. Craig said the armography was incredible and told him he’s come on leaps and bounds.

Tune in to Strictly Come Dancing 2014 tomorrow at 7.15pm to find out which couple leaves the competition. Take a look at all the couples in rehearsals from earlier today in our gallery below: