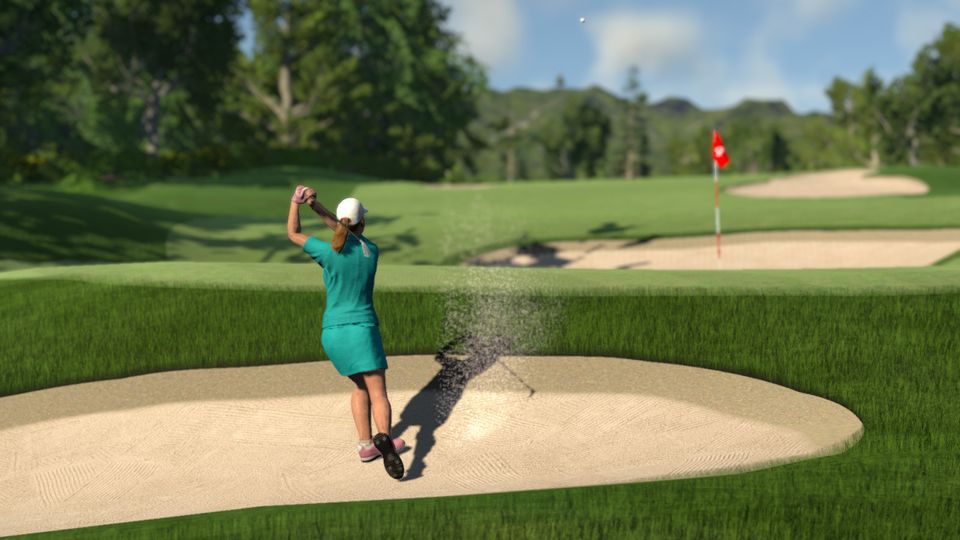 Tiger Woods PGA Tour has dominated the golf game market for over 10 years across a whole variety of formats. Last year was the last of the series leaving golf fans without a new entry to keep them entertained this year. This makes the new offering from HB Studios well worth a look. We’ve been spending some time with the Xbox One version to see if it’s worth your time.

After a short while with The Golf Club it becomes clear that the developers have focused solely on the golf simulation. This focus has resulted in a game that isn’t full of fancy or unnecessary features. This likely makes the game most attractive for golf fans but less appealing for everyone else.

Before you play you can create your golfer. This is a quick process but one that will have some players disappointed due to the lack of options. There are four male and two female golfers to choose from. You can change the colour of their hats, gloves, shirt, trousers and shoes but there is no customisation of the actual golfers. A final option is choosing if your golfer is left or right-handed.

The Golf Cub allows you to play a round of golf on a single course, play a tour of several courses or compete in a tournament. The game ships with a large selection of pre-designed courses that give plenty of variety to get you started. Games are played using the well-known stroke play rules where scores are added up and the lowest wins.

In local play four players can take turns to take their shots. The game gives you a fly-over of each hole before you play and you can also utilise an overhead camera to get an idea of where the major course features are while planning each shot. Before taking a shot you also have the option of scout and approach cameras to help you.

The game can suggest a club and shot type such as normal or chip. You are also free to play however you like. There’s actually very little hand-holding from the game and it takes some time to get to grips with how to play. When it’s time to take your shot this is done by pulling back on the right-stick and then thrusting it forward. How far you pull back is translated into power and tiny movements to the left and right can turn your shot off course.

The Left Trigger can be used to apply shot modifications to add draw or fade as well as change the amount of loft. As you apply these the game indicates the effect that these will have on your shot.

If you enjoy the golf simulation then the biggest draw to the game is the included Greg Norman course designer. This allows you to make your dream courses by starting with a theme from rural, alpine, autumn, desert and links. You can then tweak parameters such as the amount of trees, water and hills. After setting the difficulty the game will generate your entire course before allowing you to try it out or modify it further.

Once you’re happy with the course you can share it for others to play on. This means that in theory you’ll never run out of new courses to attempt. Each course can be rated and this makes it easier to find the better courses based on other players ratings.

If you’re a fan of statistics the game has you covered with pages of stats. You can pull up details of your golf performance, view your creation stats, check out your career details and also see how you rank in the world.

The Golf Club isn’t the prettiest golf game we’ve seen and manages to look rather old. It certainly doesn’t do anything to push the next-gen consoles yet it manages to stutter along at times. It feels like it needed longer in development to optimise the graphics engine so hopefully this can be improved with a patch.

Overall The Golf Club is a decent golf game that will be sure to please fans of the sport. The inclusion of a course designer and the ability to share what you create should ensure the game stays fresh and keep players coming back for a long time.

Advertisement. Scroll to continue reading.
In this article:HB Studios, PC, PS4, The Golf Club, Xbox One