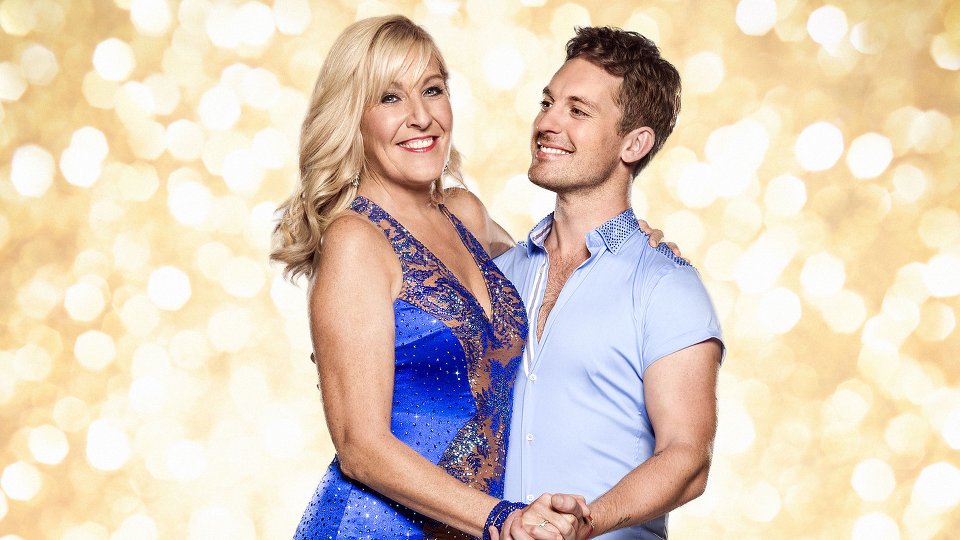 Last night saw the live shows begin as 6 couples took to the floor to perform their first routines of the series. EastEnders actor Jake Wood topped the leaderboard with his pro partner Janette Manrara after scoring 28 out of 40. Nipping at their heels was Caroline Flack and Pasha Kovalev, and Pixie Lott and Trent Whiddon who both scored 27 out of 40 from the judges.

The night’s other couples – Scott Mills and Joanne Clifton, Tim Wonnacott and Natalie Lowe, Judy Murray and Anton du Beke – failed to impress and found themselves at the bottom of the leaderboard.

Tonight’s show kicked off with a spectacular pro group dance that involved a video screen, some skirt ripping and Janette Manrara lifting the glitterball trophy.

How did the 9 couples perform tonight?

Former TOWIE star turned TV and radio personality Mark Wright opened the show tonight with his pro partner Karen Hauer. He’s already revealed that he’s known by his friends as Marky No-Moves but has three weeks of training done enough to change that nickname? Mark and Karen performed the cha cha cha for their first dance.

The dance: Superb first dance from Mark tonight! A standing ovation from the audience and lots of energy and tricks in the cha cha cha. Looks like Mark has a natural rhythm and we’re expecting him to do really well in the competition.

The comments: Len said it started off well but Mark picked up too much speed and he didn’t like the handstand. Bruno said Mark went out there with confidence and commended him on his energy but warned him it overtook the steps. Craig gave lots of critique but told him ‘well done’. Darcey said she loved the showman but told Mark to watch his shoulders.

This Morning’s roving presenter Alison Hammond is one of the celebrities we’ve been dying to see on the dancefloor. She’s partnered with reigning champion Aljaz Skorjanec and it looks like the two have been having a fun time in training. The couple danced the cha cha cha tonight and in training Alison was having trouble taking her eyes off Aljaz.

The dance: What a routine! We absolutely loved Alison tonight. Her personality beamed through in that performance and she was a brilliant dancer. No doubt people will be comparing her to Lisa Riley. Cha cha cha tastic!

The comments: Bruno said Alison’s performance was ‘wonderful’ and called her performance a ‘treat’. Craig said it was one of the most confident first performances he’s ever seen and told her she has ‘natural instinct for rhythm and dance’. Darcey called Alison ‘infectious’ and said she’d never get bored of watching her. Len called Alison ‘big, bold and bouncy’ and told her she was ‘good in the mornings but fantastic at night’.

Naturalist Steve Backshall has had some scary encounters but will any of them beat dancing infront of millions of people? Steve is partnered with Ola Jordan for the series and said he was privileged to dance with her on the show. For their first routine Steve and Ola are performing the tango. In his intro VT Steve said he was out of his comfort zone but putting in the work to do his best.

The dance: Steve’s muscles blinded us during that routine but another strong performance. The show started off really strong tonight and we think Steve could do really well in the competition. He had the moves didn’t he?

The comments: Craig said he was distracted by Steve’s muscles and told him it was a ‘very, very strong performance’. Darcey said Steve held his focus and strength throughout the routine. Len said it was ‘very well danced’ and called it ‘clean and precise’. Bruno called Steve ‘the wild one’ and told him he has great qualities he needs to work on.

Mrs Brown’s Boys actress Jennifer Gibney is paired with newcomer Tristan MacManus for the series. The two Irish stars say that no one can understand a word they say but they understand each other so that’s fine. In training Jennifer was shown getting very frustrated with herself and went to former contestant Nicky Byrne for advice. Jennifer and Tristan danced the jive for their first routine.

The dance: Poor Jennifer. She was a little lost it seemed at times in that performance and her energy was lacking in parts. We don’t know if it was nerves but it wasn’t the best performance of the night.

The comments: Darcey said the jive is a hard dance to begin with and told Jennifer to be careful with her shoulders when she got tired. Len criticised Jennifer’s feet saying the kicks and flicks weren’t sharp enough but admitted the routine made him happy. Bruno said all of the steps were there but told Jennifer to do it with more energy, rhythm and presentation next time. Craig said Jennifer’s arms were all over the place and told her to build her stamina.

Former rugby star turned model Thom Evans is partnered with Iveta Lukosiute for his Strictly Come Dancing journey. In his intro VT he said he’s comfortable with being Strictlyfied and is delighted to be partnered with Iveta. During training Iveta mentioned how wild the reaction had been to Thom and his good lucks on social media. For their first dance Thom and Iveta did the waltz.

The dance: A confident and smooth performance from Thom tonight. The rumours that he and Iveta may be getting a little romantic behind-the-scenes did nothing to harm it. Thom seemed a little inhibited but we’re sure that’s down to nerves more than anything else.

The comments: Len said it was a little safe in places but told him to lose his inhibitions next week. Bruno called it ‘so kind and so caring’ and told Thom he found it moving how careful Thom was with Iveta. Craig said Thom let Iveta down in one part of the routine but said he ‘loved it’. Darcey said she expected Thom to lead the dance but agreed with Len that it was too safe.

Casualty star Sunetra Sarker warned that she might need doctors on stand-by for her Strictly Come Dancing debut. For the series she’s partnered with Brendan Cole and Sunetra admitted that was a lot of pressure. For their first routine Sunetra and Brendan did the tango. During training Sunetra struggled with the pivots and revealed that she wanted to be better than she is.

The dance: A decent first effort from Sunetra and she looked like she’d got the hang of those pivots. The tango isn’t the easiest dance to start with but Sunetra did a really good performance. She’s definitely got potential and was better than we were expecting.

The comments: Bruno called it a ‘firecracker of a tango’ but told Sunetra that she needs to work a bit on her posture. Craig said Sunetra has ‘a great sense of rhythm’ but told her that her frame wasn’t there tonight. Darcey said she liked ‘the attack and the story’ but agreed that the hold needed to be stronger. Len said there was ‘far more right than wrong’ about the dance and told Sunetra he looked forward to seeing her next week.

MasterChef star Gregg Wallace is swapping the kitchen for the ballroom as he partners with Aliona Vilani for the new series of Strictly Come Dancing. It seems that in training there is a conflict of personalities as Gregg admits he jokes all the time and that Aliona is stern. For their first dance Gregg and Aliona danced the cha cha cha.

The dance: Oh dear! That was some dad dancing from Gregg tonight. He seemed lost in the routine several times and poor Aliona did her best to hold it all together. He’s going to have to really up his game if he wants to progress in the competition. That wasn’t a great cha cha cha.

The comments: Craig said Gregg was like a ‘wind up toy’ and a ‘cooker pressure about to explode’. Darcey said she ‘weirdly liked that’ and told him she liked him without his glasses. Len said he would have liked ‘bigger portions’ and told Gregg that may have over-practised the routine. Bruno said it was like ‘a mince pie with a soggy bottom’ but that Gregg left a ‘lingering sweet after-taste’.

The Saturdays singer Frankie Bridge has been squeezing her training in whilst touring with her group in support of their greatest hits. For this series Frankie is paired with Kevin Clifton and she’s got a lot to live up to after Kevin got to the final with Susanna Reid last year. In training Frankie battled tiredness as she got her waltz ready for the live shows.

The dance: What a beautiful effort from Frankie. Considering that she’s been training whilst on tour she looked confident and comfortable on the dancefloor. She sighed a breath of relief at the end but there really was no need – she did really well tonight!

Blue star Simon Webbe has appeared on Strictly before when he took part in the Christmas special. Partnered with Kirstina Rihanoff for the series, Simon promised to show her some of Blue’s infamous shoulder moves. For their first dance Simon & Kristina performed the jive. In training Simon said he found every step difficult but felt lucky to have Kristina.

The overall leaderboard for the weekend is:

Strictly Come Dancing continues at 6.20pm next Saturday on BBC One. Take a look at tonight’s couples in dress rehearsal earlier today below: