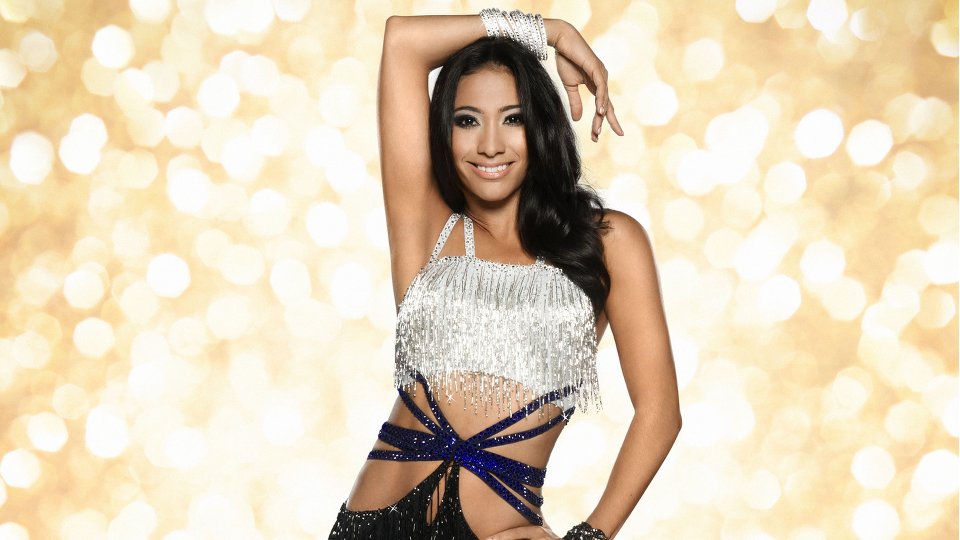 Strictly Come Dancing kicks off its 2014 series proper tonight with the first of two live shows for the weekend.

The celebrities will take to the floor with their professional partners for the first time this series and we can’t wait to see who can move. Ahead of the first live shows we caught up with Strictly pro Karen Hauer who will be dancing with TV personality Mark Wright.

During our exclusive interview we found out how training is going, discussed Mark’s dance abilities and talked about the kind of dance teacher Karen is.

How has the training been going with Mark so far?

It’s been going really good. He’s a complete beginner so it was a bit of a shock for him at first to be moving so quickly. I’m asking a lot from her for this very first dance but he’s been surprising me every single day and improving. He’s a really good student who wants to do well and he’s doing his best so far what I’m seeing and how he’s responding.

What will you be dancing this weekend?

That’s quite a lively dance to start out with on week 1. How’s Mark been getting to grips with it?

Yeah! It’s a very cheeky dance and it has a lot of energy. It’s a happy kind of dance and it’s a good way to kick off the Strictly series. It’s a good cheeky chappy cha cha cha (laughs).

You mentioned that he’s a beginner and that he’s been a good student so far. What has it been like for Mark to pick up all of the moves and the right steps?

At first he was getting very frustrated because some of the steps a re a bit unnatural for him. Especially things like keeping the chest lifted, keeping the arms and legs straight, doing toe leads instead of heel leads, pointing his feet, bending and straightening his legs. There are a lot of things I’m asking for that are extremely necessary for the very first dance. Obviously I want him to make a really good impression on the judges but I think what he has going for him is that he really wants to go out there and give it his best. That’s all I can ask for.

In your first steps video Mark says that you’ve been really patient with him whilst he learns. Do you feel there’s chemistry building between you now?

We’re really good friends and that helps out a lot. We have a good laugh and all the fun we’re having is coming through in our cha cha and hopefully it’ll come through in all of our dances that we’re really good mates. It’s a good place to start that we both starting trusting each other and relating to each other in each dance even though every dance is going to be a different character. As long as there’s trust natural chemistry will come along with it.

From the training so far what would say is Mark’s best asset when it comes to being on the dancefloor?

From what I see I think he really enjoys dancing. Every time I look at him he has a big smile on his face. When he’s doing a Cuban break – he didn’t even know what a Cuban break was a couple of weeks ago – he loves it and he’s got so much positive energy. I never really expected that from him. He absolutely loves dancing and he has a natural rhythm about him that will come in handy.

What are you like as a dance teacher? Give us a little insight…

I’m patient. That’s a fact but at the same time I like to slowly push them and encourage. The whip will come out once in a while when under pressure but most of the time I really like to make my students feel comfortable but at the same time they know they have to work hard for me to be that comfortable. If they’re not working hard forget it and forget about me being nice let me put it that way.

We can’t imagine you not being nice Karen!

Aww! I’m very nice. I always smile if I have a coffee in my hand and a croissant!

Maybe that’s it – it’s the smiling!

Are you feeling quite confident about the first live shows?

We’re feeling good as a team. You never know what’s going to happen in a live show but so far everything is going well. We’ll see what happens! Mark is a bringing a smile to my face with what he’s doing so I can only be proud about whatever happens over the weekend.

Last time we spoke you told me you weren’t going to give much away about the pro group dances this year. Is there anything you can tease about this weekend’s shows?

Strictly Come Dancing returns tonight at 9pm on BBC One and continues tomorrow at 7pm.