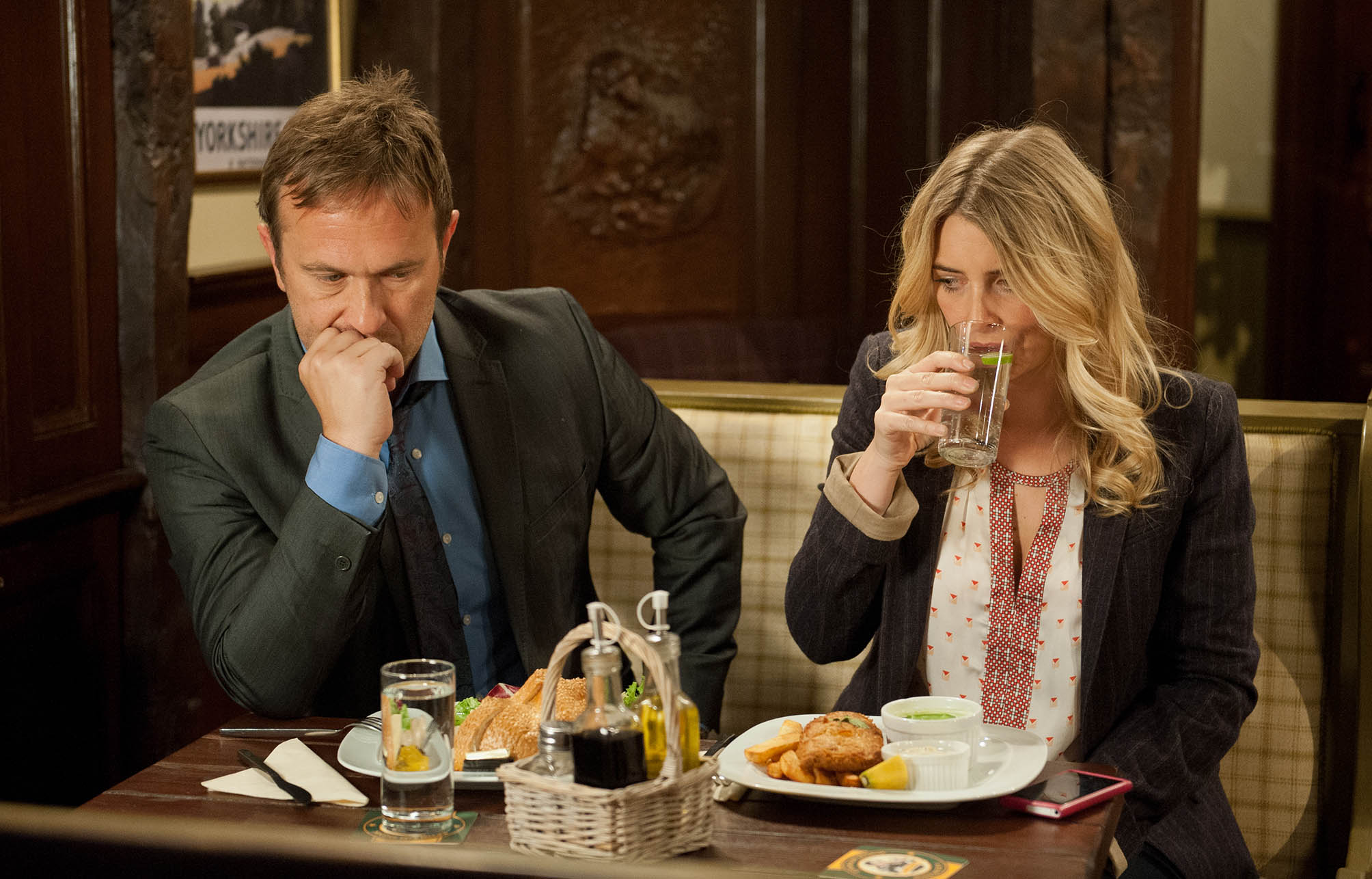 Welcome to our regular look at the spoilers for the week ahead in Emmerdale.  Last week it looked like Megan and Robbie were about to prove that Charity did indeed have an abortion, but Robbie, unfortunately put his trust in Tracy and ended up getting caught by the police.  Will Charity’s luck hold another week?  Read on…

Declan is doubtful over Charity

It seems like Declan wants to believe Charity over Megan’s accusations of an abortion, but he knows her only too well, so the doubt is still there no matter how small.  It’s not helped when Robbie returns to the village, ejected from a police car, telling Jimmy that he was arrested for doing a favour for a mate who’s in denial about his wife having had an abortion.

Charity realises that Declan is starting to question her lies and quickly tries to come up with a plausible story by asking Chas to say that she had the abortion but she refuses point blank.  Things worsen when a stressed Declan asks her to accompany him to the abortion clinic to prove she didn’t abort their baby.  This is Charity though, and she manages to tell Declan that it was Debbie who had the abortion, meaning that she has to get to Debbie before Declan to fill her in on the whole story.  How will feisty Debbie react to not only having to cover for her mum ,but also what her mum really did?

With Marlon and Laurel’s wedding day looming large this week the pair seem far from the picture of joy and happiness.  When Laurel’s father Doug arrives this week, he and Laurel catch Marlon watching something on the camera but he quickly turns it off clearly covering something.  Once he’s out of the room, Laurel watches the footage and sees it’s of Donna, plunging her deeper into insecurity.

Marlon clearing isn’t coping with losing Donna and decides to take April out of school so that they can spend the day together, not noticing that Laurel has tried to call him and he almost misses the wedding rehearsal.  Ironically it’s Laurel’s ex-husband Ashley that’s a willing stand in for the run through.

Later as the pair head out on their respective hen and stag parties, Laurel slips away from the pub and is followed by a concerned Ashley who offers her a kind ear.  Laurel is a bit tipsy and emotional and tries to kiss him prompting him to tell her to call the wedding off.  With both the bride and the groom in turmoil, will the wedding go ahead as planned on Thursday or will one, or both, get cold feet?

Sam realises the extent of his money problems

Poor old Sam, he’s not the sharpest tool in the box and has been manipulated by Tracey since she arrived in the village.  This week he realises the true extent of his money worries when he opens a credit card statement and see exactly how much he owes.  Distraught, he contemplates stealing only to be clocked by Kerry who warns him off and tells him to think of Samson.

Speaking of Samson, it seems he has been learning a thing or two from his dad when he gives his new ipad to a girl at school that he likes, in the hope that it will make her like him back, just like Sam has been doing with Tracy.  Will this make him stop and rethink his relationship with Tracy?

It seems that despite being with Megan, Jai can’t leave Leyla alone.  This week he tries to smooth talk her with a bouquet of flowers only to have them thrown back in his face and soon after Megan arrives and is surprised to find him in her office.  He gives her the bouquet instead and receives a passionate kiss for his reward.  Later, Megan takes pity on Leyla and tells her they need to find her a fella but she already has a man on her mind and heads to the sweet factory!

Dan tells Kerry about his and Ali’s indiscretion and is shocked by her decision.  Will she be able to keep from telling Ruby?

Harriet is troubled to learn about Laurel kissing Ashley, is that the green eyed monster we see?

Jimmy decides to play Nicola at her own game and gives himself a youthful make over and tells her he’s started zumba classes.