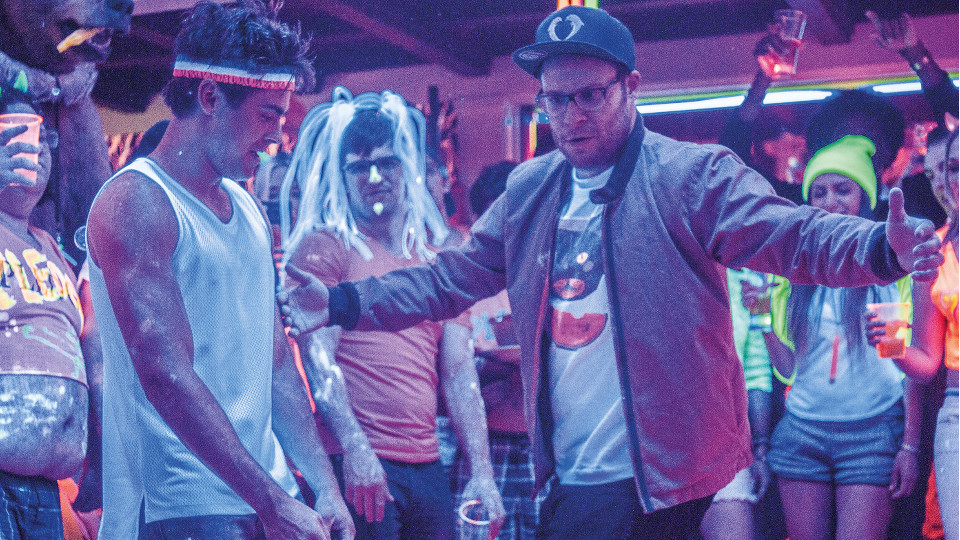 Mac and Kelly Radner (Seth Rogen and Rose Byrne) are married couple with a baby who fear the worst when a college fraternity moves in next door. What starts off as an amicable union soon descends into all-out war, after Mac calls the cops on them for making too much noise. The head of the fraternity Teddy (Zac Efron) and his friends get their own back and before long, the two sets of neighbours are at each others throats.

The premise of Bad Neighbours isn’t Shakespeare but it does manufacture quite a lot of laughs. There are the usual visual gags and physical comedy skits on show but also some hilarious Robert De Niro impersonations, plenty of drunken and stoned hi-jinks and some quite ingenuous uses for air-bags.

Zac Efron gets his shirt off yet again for an enjoyable but un-taxing performance. Efron continues to impress but surely deserves better gigs at this stage of his career. That said, he approaches the role of Teddy with gusto and clearly has fun being an idiot and ‘the bad guy’ of the piece. Dave Franco (brother of James) also shows up as one of the fraternity brothers and does a great job, especially alongside Efron.

Rose Byrne cements her status as the most versatile actress of her generation whilst Seth Rogen continues to play Seth Rogen. It would be nice if every one of his films didn’t end up being a stoner comedy. But the two do share a good chemistry and certainly know how to play each set-piece for maximum laughs.

Bad Neighbours is an instantly forgettable comedy that starts off brighter than it ends. With this cast assembled, it was always going to be watchable. There are belly laughs to be had but the film drags towards the end and quickly turns into yet another weed comedy. It’s entertaining but Rogen along with writing duo Andrew J. Cohen and Brendan O’Brien need to look past the obvious gags if they are to craft a true comedy that will stand the test of time.