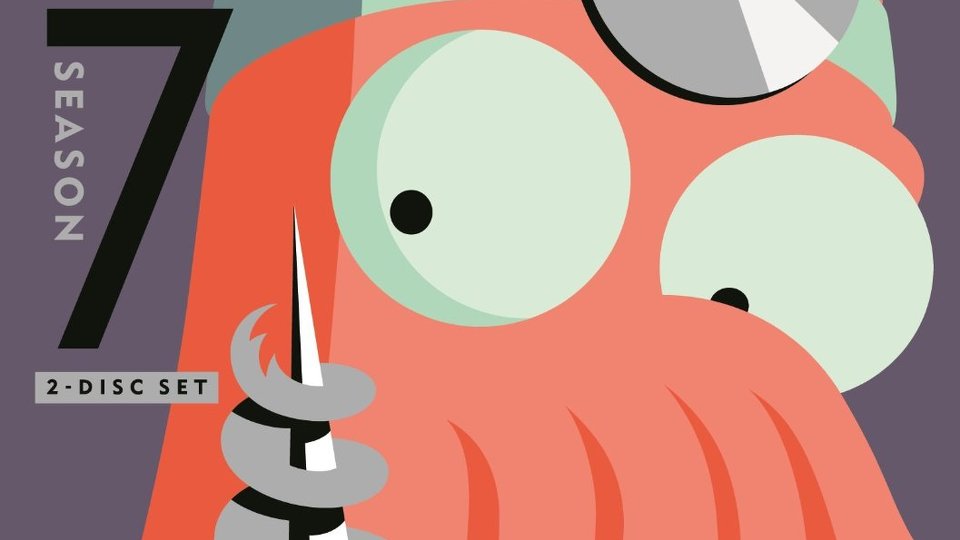 Futurama is off the air again for now in terms of new episodes following it’s cancellation last year. The show has a had a rocky run since it debuted in 1999 and after getting a second chance with a new network following a series of feature length adventures, the show managed another four seasons (three technically as the original broadcast season 7 was aired in two parts).

In the UK the first half of the show’s seventh season has been released as The Complete Season 7 with a Season 8 release planned which will contain the remainder of the episodes. Futurama: The Complete Season 7 features 13 brand new episodes across 2-discs and picks up the adventures of Fry (Billy West), Leela (Katey Sagal), Bender (John DiMaggio) and their friends.

The season opens with The Bots and the Bees which is Futurama at its most bonkers and entertaining. Bender has a fight with the new soda machine (voiced by special guest Wanda Sykes) which leads to an angry sexcapade and results in a son. The episode definitely falls in the WTF category but is absolutely hilarious. Episodes where Bender is the focus are always the strongest and it’s definitely a flying start to the season.

Over the course of the 13 episodes there are plenty of weird and wonderful happenings including the heading of Nixon running for re-election (Decision 3012), Bender joins the paparazzi in an attempt to photograph a famous actor whose face has to be hidden for the sake of mankind (The Thief of Baghdad) and Fry’s drinking during Ocktoberfest lands him in a whole lot of trouble that makes his friends think he’s actually dead (Fun on a Bun).

The strongest episode of the season is the topical 31st Century Fox which finds Bender fighting for the rights of robot foxes after discovering they are being hunted for sport. It’s odd to see such a topical issue playing out in an animated future setting but it works well and it’s a superb episode packed with plenty of humour.

The season ends on the odd episode Naturama which sees the main characters depicted as animals in a three-part documentary episode. As with the season opener it showcases the off-the-wall nature of Futurama.

Extras on the boxset include an alternate ending for episode Zapp Dingbat, audio commentaries on all 13 episodes, a series of featurettes and a karaoke feature enabling you to sing-a-long with your favourite characters.

Whilst Futurama may be off the air for now, we’re not counting out another return for it sometime in the future. The show still has a loyal fanbase and after already surviving the axe once, we wouldn’t be surprised if it makes a comeback a few years from now. Until then we’ve got another boxset to look forward to in the future so we don’t have to wave goodbye completely just yet.