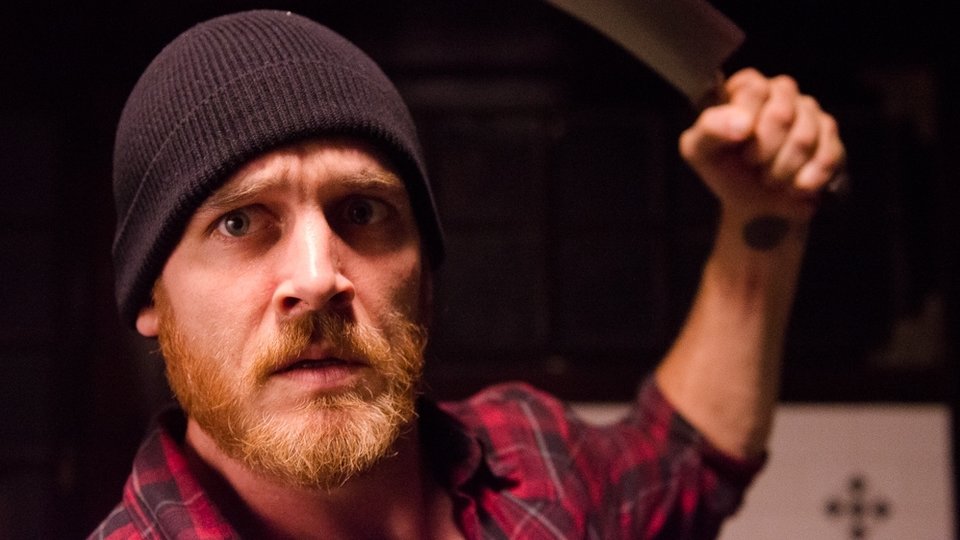 Having just lost his job and facing imminent eviction from his home, Craig (Pat Healy – The Innkeepers) decides to get a drink after work. He stumbles on an old high-school friend named Vince (Ethan Embry – Empire Records) and the two reminisce about old times over a few shots. They soon get talking to a wealthy couple named Violet (Sara Paxton – Superhero Movie) and Colin (David Koechner – Anchorman), who are very keen to get to know the guys. As the evening progresses Colin bets them to do various silly things for hard cash. Before long this game gets very serious and with it, the very real prospect that Craig could solve all his financial worries in one night. But how far is he willing to go?

Cheap Thrills has an intriguing premise that makes the viewer ask themselves some hard questions. It’s a topical and very astute black comedy/horror that takes a very simple set-up and keeps you hooked throughout.

The cast are all superb here with Pat Healy leading the line well. He was very impressive in The Innkeepers (again alongside Sara Paxton) and continues to impress here as a man who needs to provide for his family no matter what. We see the film from his perspective and you really start to feel for his bleak predicament. His transformation during the film is genuine and will shock and entertain you in equal measure.

It’s been a long time since we saw Ethan Embry on the big screen but he makes a very welcome return here. The Can’t Hardly Wait and Empire Records star has been quiet of late but its refreshing to see him excel here as Vince, Craig’s old school buddy. Embry gives the film a great level of believability, especially when he and Healy share the screen. He is also very funny and plays up to the black-comedy element of this story with just the right amount of tact. Their dynamic is outstanding.

Comedy legend David Koechner had been looking for something darker for some time after always playing the funny guy in his movies. The Anchorman star does an exceptional job in Cheap Thrills and is the main reason why the film works so well. As good as all the other actors are, it’s Koechner who brings you back every time the film threatens to get too dark. He is the one character who reacts in the same way as we do as an audience. He is also the main protagonist so there’s a nice dynamic to play with there. At no point does he feel like a conventional bad guy and that’s why the film is so effective.

Sara Paxton does a very convincing job as a bored wife who gets off on the escalating mayhem that ensues. She brings a decent level of ambivalence to her character until the final third, when we learn just what kind of a person she is. Paxton also easily sells the sex appeal of Violet and you can believe that Koechner’s character Colin would do all of these things just to keep her happy.

As the stakes of the bets escalate in the movie, so does the need for you to have a strong stomach. Some of the tasks are revolting in a horror crowd-cheering sort of way and will certainly test your resolve. It’s gory and disgusting in places but never off-kilt with what’s happening in the script. It’s all there for a reason and whilst it’s gross and violent, it’s also handled very well by director E.L. Katz, both on a social commentary level and as a sheer ballsy black comedy.

Cheap Thrills is exactly what clever modern horror should aspire to be. It’s telling and truthful whilst being absurd and comical. The situations and the money involved will certainly get you talking as to where you would draw the line to make some quick cash. It also cleverly comments on the financial climate we are in right now and the class system that separates the rich from the poor. Cheap Thrills is a stellar effort that is sure to be one of the horror highlights of the year.

Jason Palmerhttp://www.entertainment-focus.com
Jason is a film contributor for Entertainment Focus (EF) bringing you the latest news and reviews from the movie world.
Previous article
Noah DVD review
Next article
Noah gets a VOD release date