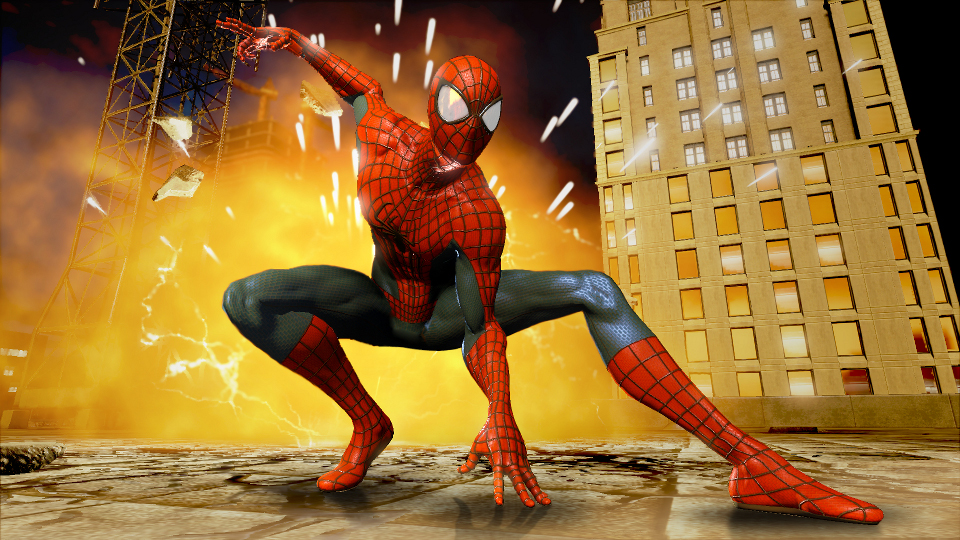 The Amazing Spider-Man 2 is developed by Beenox and published by Activision. It follows on from 2012’s The Amazing Spider-Man and aims to be more than just a tie-in to the latest movie. The game promises to go beyond the film with its own unique story. We’ve been spending some time with the Xbox 360 version.

The game begins with a flashback to the time when Peter Parker refuses to help stop a criminal who then goes on to kill his Uncle Ben. This section acts as a tutorial for the game and after the flashback you take control of Spider-Man as he hunts down his Uncle’s killer.

The game is once again set in Manhattan and presents you with an open world giving you the freedom to go where you like. Spider-Man often has to travel great distances in short spaces of time which is done using his web abilities. Traversing the city as Spider-Man never gets old and falling from high and firing a web before hitting the ground then swinging through traffic is great fun.

Unlike the previous game you now shoot webs with your left and right arms via the triggers. This requires a little practice but is more realistic and fun once you get the hang of it. Also adding to the realism is the fact that your webs must attach to buildings. This also stops you magically swinging high up above the city.

There’s a linear path through the main story missions but these are broken up with plenty of distractions along the way. These distractions come in the form of side-missions which are crimes that happen at random around the city. Using Spidey’s smartphone you can access an overhead map of the city and this shows you the locations of current crimes as well as your other objectives.

These side-missions feature a variety of activities but sadly they become repetitive fast. Missions on offer include turning up to prevent a crime such as a burglary by apprehending those involved. Using your camera to take photographs of suspicious situations and rescuing civilians in need or infiltrating hideouts to recover items.

Side-missions are also tied into a kind of reputation system that tracks how Spider-Man is viewed by the city. Stopping crime increases your rep and the more you stop the more you are liked and the better your abilities become. If you fail to prevent crime it results in more and your popularity drops. With negative popularity the city views you as a menace and teams are dispatched that hinder your progress.

A large part of your time is spent fighting bad guys. This uses a similar combat system to the Batman Arkham games. Spider-Man has a variety of attacks available to him such as punches and counters. He can also call on his web abilities to slow enemies down or snatch weapons from them. As you progress through the game your abilities also become more powerful. If you keep your combo meter alive then you can unleash more powerful takedown moves. The combat is fun but rather simplistic and you can actually get through a lot of battles by just button-mashing.

At times in the story you take part in conversations that give you the choice of multiple dialogue options. Unfortunately your choices have no impact on the story which seems to be a bit of a missed opportunity. Whether you choose them all or just to skip them Spider-Man still goes over the main stuff again anyway.

No Spider-Man game would be complete without the villains and this one has plenty to keep you busy including Electro, Kraven the Hunter, Green Goblin and Kingpin. We feel some of the bosses were added for the sake of having more as the story doesn’t always explain very well why they are there. The boss fights themselves are pretty standard stuff and nothing we haven’t seen before.

Being available on most formats has meant the game needs to work well on everything. This has resulted in a game that looks ok on the older platforms but just a little nicer on the newer ones. It doesn’t seem to take much advantage of the superior capabilities of Xbox One, PS4 and PC. We also wonder how rushed the title was in order to be released alongside the new movie. Tie-ins usually seem to suffer due to shorter development times.

Overall The Amazing Spider-Man 2 is just a mediocre Spider-Man game. It brings more of the same and takes very little risk. Spider-Man fans will still want to check it out but be warned that you may find yourself coming away disappointed.