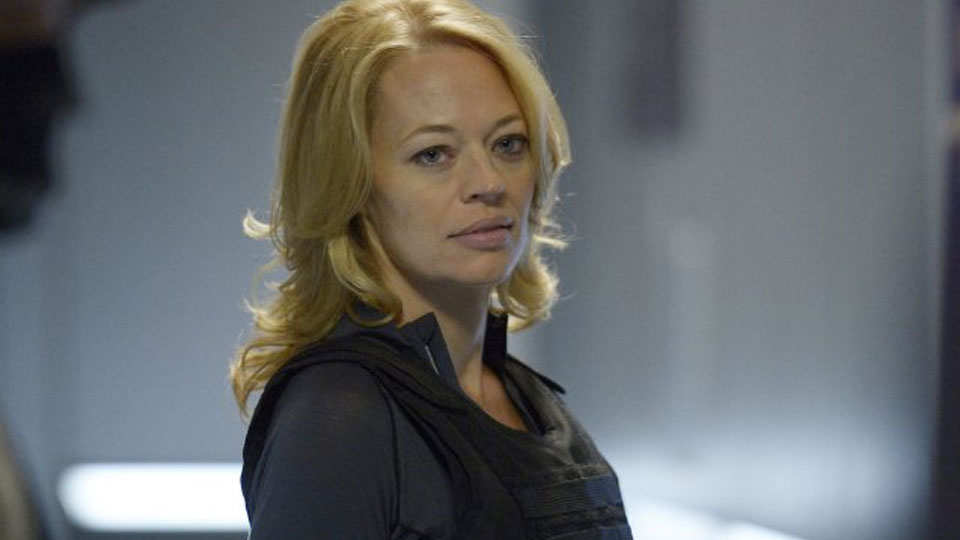 The first season of hit sci-fi show Helix was released on DVD this week following it’s transmission on Channel 5 and 5*.

To celebrate the release yesterday we brought you an interview with Billy Campbell and Jordan Hayes who play Alan and Jordan in the series. Today we’ve got Jeri Ryan and executive producer Steven Maeda talking about the show.

Find out what they had to say about Jeri’s character Constance, what it’s like to work on such a gory show and much more.

Can you talk about when we first see Sutton, she pretends to be kind of this nice woman who’s there to help, and which we know isn’t true pretty quickly. Can you talk about playing the more cold calculated side? Is there anyone that you got inspiration from?

Jeri Ryan: No. She was just fun. This was a really fun role to play because it’s – she’s kind of out there. You know, she’s not subtle, which I love. So it was fun to just sort of let go and just really play and let her go to those places. It was – that was a treat as an actor.

Steve Maeda: Yes. Sutton for us was someone who put on a very sort of benign and corporate face, which is why she does a lot of corporate speak, but then underneath there’s obviously a lot more going on, and Jeri just ate it up. It was fantastic.

What first attracted you to the role?

JR: You know, it was fun – well the concept of the show to begin with was sort of intriguing to me. I hadn’t seen any of it at that point because it was just being shot. And, I loved the people that were involved in it. So that was all really cool.

And then when I sort of was hearing a little bit more about the character and I was seeing how she was written, then it was fun.

You know what? It’s fun. This is my sort of first foray back into sci-fi in a number of years, so it was nice. It was a lot of fun to get back into it. And it’s a fantastic show.

Whose idea was it to have Constance have to file her teeth down? Is that a hint that maybe she has to keep doing that otherwise they’ll grow longer and longer?

SM: That’s absolutely the hint, and that idea I think that was something that came from Cameron’s original script. It may have actually been in the original pilot. I don’t remember, but it’s something that we always liked because it was so freaking weird. And we just had to put it in. It’s just the best, so yes; it was there originally. It was something that fell out of the pilot I think, and then we ended up finding a nice place for it.

How would you best describe Constance and what motivates her?

SM: hat’s a good question. She is a ball buster.

SM: Yes, I mean she’s – but she’s a company employee, and so I would say she is trying to be loyal to – you know, to the Ilaria corporation…

JR: To the corporation, yes.

SM: ..and to the folks that she has been working with and been developing this whole plan with. And once she finds out that Hatake has since been working on his own agenda, she gets pretty damn angry about that.

And it’s an interesting thing, which I thought Jeri really walked that line really well, that line between the corporate kind of niceties and the polite things that you say versus the things that you actually do. And once the fangs came out, it’s all over. So it was a lot of fun to watch.

And I also love – you’ll – as you’ll see without trying to give too much away, there is – I mean, she’s definitely, as Steve said, the – you know in the corporate world, and very much looking out for the best interests of (Ilaria), but she’s also – you sort of find out that there’s a little more personal issue for her at stake as well, which I really loved as well.

SM: Yes. I mean, we tried to do it… I was just going to say it’s something we tried to do with characters even if they seem to be – both with Hatake and with Sutton, even if they seem to be very kind of on point and you know their agenda comes first, we try to infuse them with some emotion down the road so you understand where they’re coming from and it’s not just about money. It’s not just about greed or this sci-fi illness of the show, but there’s an emotional component as well.

JR: And I love that.

What was it like to work on a series that’s sometimes kind of gory and gross?

Come on. I observed autopsies when I was on Body of Proof. I love this stuff. I love the science of it. I love the gore. I love all of it.

Jeri, did you bond with or become especially good friends with any particular members of the cast or crew during your time on Helix?

JR: You know what, everybody was great, but I absolutely fell in love with Kyra Zagorsky. She is amazing, and we didn’t get that many scenes together. Actually, we sort of bonded before we even got to technically work together.

She’s amazing, amazing, amazing. So talented. I’m so excited for people to see her in this and discover her, and she’s just the coolest lady in real life as well, so that’s been really fun.

SM: Yes, I’ll second that. She’s – yes, we really feel like she was a find in that she had never been a series regular before, and she’s terrific.

JR: Actually when we watched the pilot, I was saying that they had screened the pilot for the cast and crew at lunch one day when I was shooting, and I hadn’t met her yet, but I was watching the show, and I was like, “Who is that?” Because you can’t take your eyes off her. She’s just – her performance is so good in this and she’s just kind of mesmerizing. Really impressive.