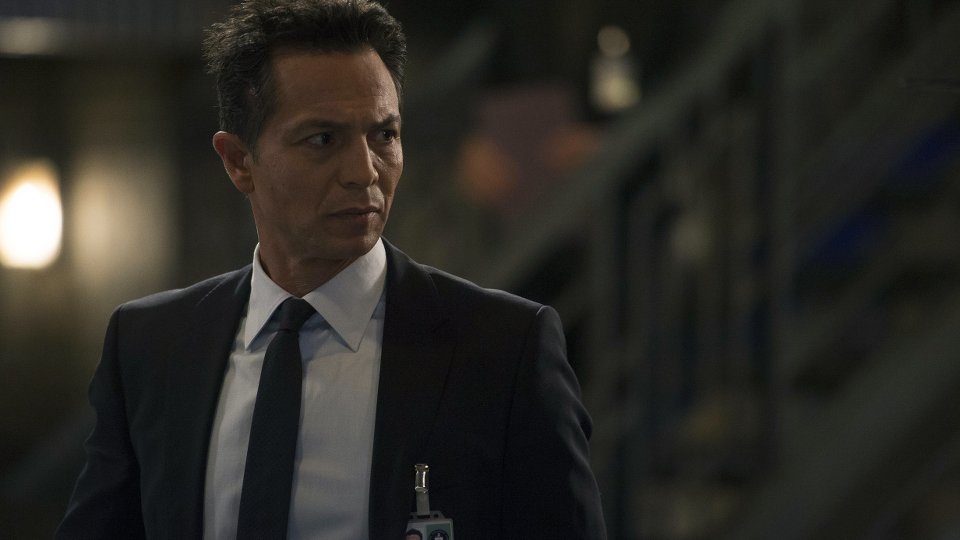 Last week’s episode of 24: Live Another Day ended with an almighty cliff-hanger as President Heller (William Devane) stood in the middle of Wembley Stadium as a drone missile blew him up.

If you haven’t seen the latest episode of 24: Live Another Day we suggest you stop reading now so we don’t spoil anything for you. If you have seen it and want to relive all the action keep reading.

Well conspiracy theorists were proven right when it was revealed tonight that President Heller was safe and well after being ‘blown up’. Whilst Audrey (Kim Raver) and the Prime Minister (Stephen Fry) looked on weeping and Margot (Michelle Fairley) had a short-lived celebration, viewers discovered that Jack (Kiefer Sutherland) was with Heller taking him to safety.

How you ask? Well Chloe managed to hack into the drone and loop the video feed so it looked like Heller was there giving Jack time to get him away from the stadium. Ian (Liam Garrigan) realised that they had been deceived when he spotted the loop but he’d already disarmed 5 of the 6 drones they had control over.

Jack called Audrey and the rest of the President’s team to inform them that Heller was alive and safe but would be kept hidden until the danger was over. The look of relief on Audrey’s face suggested that her feelings for Jack may not be dormant any longer. The CIA were in on the call too so Kate (Yvonne Strahovski) and Navarro (Benjamin Bratt) heard that the President was fine.

Speaking of the CIA Kate was beginning to get very suspicious about Jordan’s (Giles Matthey) whereabouts but Navarro kept pushing her to concentrate on finding Margot.

Over at terrorist HQ Margot asked her gunmen to stand guard as Ian explained that the CIA had access to their video feed and may be able to trace their location and stop the drone. A furious Margot asked Ian to redirect the one remaining drone and send it back to London with Waterloo Station as its target with the sole purpose of punishing Heller for betraying her.

Jack was flying over London in a helicopter whilst Chloe (Mary Lynn Rajskub) tried to find out Margot’s location. With a plan in mind Chloe appealed to Adrian Cross (Michael Wincott) to help her unaware that he’s up to his ears in dodgy dealings with Navarro and is after the device. With his help Chloe managed to find Margot’s location but that wasn’t enough for Jack, he wanted her exact floor details. Chloe explained that if they take out the power she should be able to find them.

Kate and Erik (Gbenga Akkinagbe) arrived at Margot’s location and found themselves in the midst of gunfire. Whilst they took down as many gunmen as they could, Jack landed on the roof of the office building. He instructed Kate to take the power out so she threw a grenade at the power supply allowing Chloe to get their floor location for Jack. The gun-wielding one-man-army then entered the office block and realised he wasn’t going to be able to get anywhere near to Margot due to the amount of gunmen protecting her. As he formed a new plan, Kate and Erik entered the building with CIA back-up and made their way to the floor Margot and Ian were on.

Margot then went for Mother of the Year once again by pulling a gun on Ian when he tried to escape to avoid being caught by the CIA. Amazingly he changed his mind about leaving his mother and agreed to stick by her. Meanwhile the Prime Minister called for an evacuation of Waterloo Station.

Back to Jack! He went up to the roof and abseiled down the side of the office building. When he reached the floor that Margot and Ian were on he was spotted by Ian who shot at him. Jack swiftly pulled Ian out of the window and watched as he fell to his death. He then shot Margot and kept hold of her whilst Chloe talked him through how to redirect the drone. When it exploded in the Thames, Jack threw Margot out of the window where she joined her son lying dead on the ground.

With Margot dead and the drones taken out of action, Heller arrived back at his HQ and reunited with Audrey. He apologised for what he put everyone through and requested someone get Jack on the phone. He then thanked Jack for looking after him as Mark (Tate Donovan) looked furious and Audrey looked a little swoony.

As Kate dealt with the aftermath of Margot and Ian’s deaths, she received a call from her informer telling her that Jordan had been found dead. Erik left with her as they headed to the crime scene but first Kate called Navarro to tell him. The discovery of another body with Jordan’s set alarm bells off prompting Navarro to call Adrian pleading for help. Adrian told Navarro he would give him whatever he needed if he brought the over-ride device to him.

Arriving on the crime scene Kate discovered that the mystery man with Jordan wasn’t in any database. Jack meanwhile was leaving with the over-ride device and called Chloe who told him she wouldn’t help him any longer and refused to do anything further. As she hung up she climbed into a car and Adrian was at the wheel.

Jack arrived at the CIA with the over-ride device and gave it to an analyst to look at. He then spoke to Kate and said he would try and help her find out who the man was that had been found dead with Jordan. Navarro tried to get Jack off the trail but he refused saying he would send the prints to a friend at Langley.

Despite everyone clearly being very busy after the crisis and near tragedy, Audrey rang Jack for a chat (like you do). As he went to answer the call, Navarro took down the analyst working on the over-ride device before he stole it and started to run away. Jack received another call and told Audrey he had to go. His friend at Langley made the connection between the hitman and Navarro.

Jack gave chase to Navarro but lost him. Navarro contacted Adrian to arrange a meeting spot to hand over the over-ride device. Chloe remained completely oblivious…

24: Live Another Day continues Mondays at 9/8c on FOX in the US and Wednesdays at 9pm on Sky 1 HD in the UK.