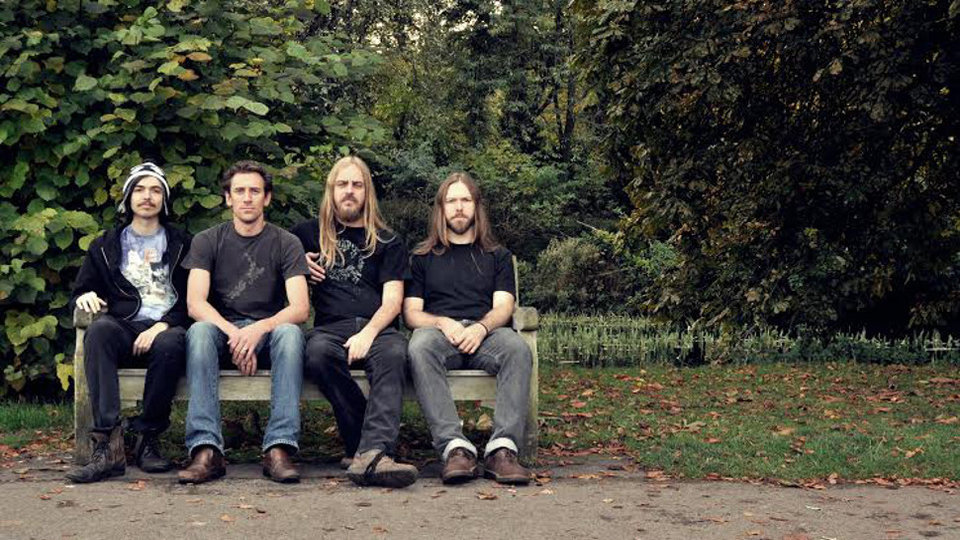 Gurt is a small London based band with the ability to make a lot of noise! For a few years now the boys, who started making music for fun have been responsible for some serious sore necks across the capital and the rest of the country. Following a handful of EPs (with flattering reviews we may add) the band have now finally released their first full length album, Horrendosaurus via When Planets Collide.

Ahead of their upcoming European tour we caught up with the boys to talk about their album, music and the tour.

How are you guys doing on this fine day?

Great! Excited and slightly nervous as it just 4 sleeps until we leave for our European Tour.

And where does this Q&A find you?

Prepping and packing for our tour and trying to remember what we need to take, and not to leave our passports behind!

Horrendosaurus was out last week, how does it feel to have an LP out?

Amazing, It has been a long time coming and it feels almost like we are a real band now.

Tell me a little bit about how the album has come to be?

We have spent the past year saving all our pennies earned from Merch and shows, as well as obviously taking a few sessions writing the thing too. We all have day jobs so although we write fairly quickly, it has been quite hard getting us all into the same room with each other!

You haven’t included some of your previous releases why is that?

With our line up change a couple of years ago we wanted to write as the new 4 piece and show how we have progressed as a band, although the songs are the same style we have evolved and the sound is quite different from what it was 5 years ago so it was important to show completely new songs and what we are like as a band now.

What were the challenges you faced (if any) when recording the album?

Money and time, with it all being self funded we only had so much we could put in (but it was well spent!) but we had a strict time limit as we needed to get it out before this upcoming tour so it would maybe have been a little nice to have a bit more time but not working to a strict deadline usually encourages laziness so it was a good thing really!

We particularly enjoy your song titles, what’s the inspiration behind the poetry?

Nonsense!!! We want to have fun with every aspect of the band and not take ourselves too seriously so that is 100% our inspiration!

You also take a lot of pride in your merchandise, do you enjoy this hands-on approach? How important do you think it is?

It is THE MOST important thing these days as a band as its your main source of income, almost every penny funding our existence comes from the fans buying merch from us so it is VITAL to our upkeep. It helps that we are creative too so we like to get involved in all shirts and artwork with our design and illustration back grounds it is one of the most satisfying things seeing random people wearing shirts with your stuff on!

You’re embarking on your first European tour, how have you been preparing?

At the moment it feels like we have not been as there has been so much work getting the album out but we have been putting a lot of effort it to preparing, from the boxes of shirts and CDs to bring with us to the numerous practices that involve perfecting the NEW set list with 2 drummers. We have Simo drumming as normal for the UK dates but then due to family commitments we have our stand in Drummer and good friend Bill doing the rest of the dates. So that means lots of practices to ensure we are the best we can be.

Have any of you toured abroad before, how was the experience?

Yes, but only for a few days at a time around the UK and its always been a blast but too much drink and stuff in sort a space of time so we really are needing to learn how to pace ourselves…

You’ll be away for almost a month, how will manage to stay grounded?

Where are you most looking forward to play?

What a question as there are so many but Amsterdam is pretty “high” up on the list, Can’t wait to go to Spain too and there is an open air festival we play in Germany which should be pretty damn cool too.

What’s the weirdest/worse thing that ever happened to you whilst on tour?

I think we have been generally quite lucky whilst on tour (fingers crossed that will remain the same) but when we played in Holland last year as part of a few day jaunt we had the pleasure of playing on a stage that was made from 2 Pool tables pushed together with a plank of wood on top. Although being pretty high up we could not help but think that any minute the whole thing was going to collapse beneath us!!

Finally I hope you have a great tour and to see you in London soon!

We play the Underworld on the 25th of June, be there!!

You can see the full tour dates on Gurt’s website.