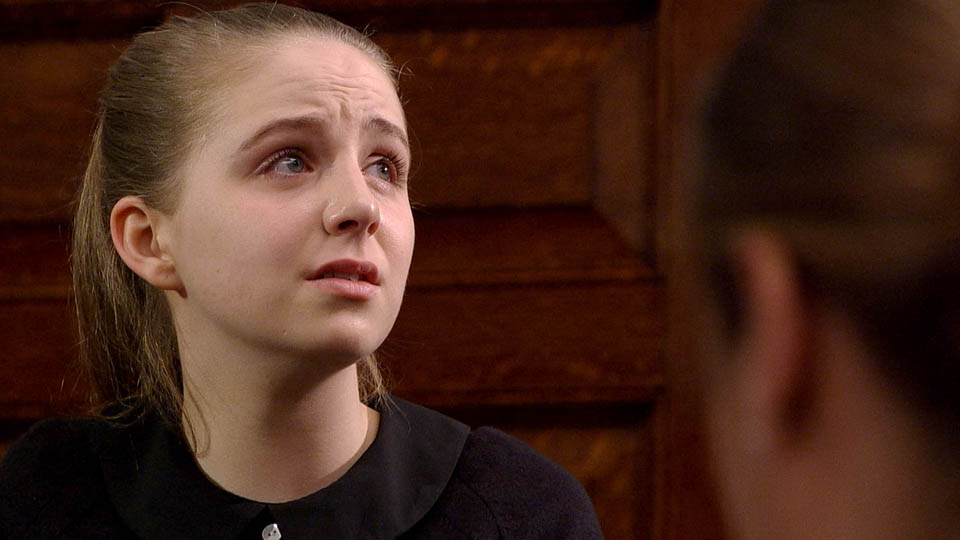 With all the World Cup action you may have missed your favourite soap.  Don’t worry we’ve got a handy recap and a sneak peak at next week for you too.

The week has finally arrived that Belle has to face the judge and jury in the case against her of murdering best mate Gemma.  Things don’t go her way as the prosecution cross examines first Sean and then Belle herself to paint a damning picture for the jury.

Dom is wracked with emotion but find his opinion shifting after watching a DVD that Gemma and Belle made and realises that Belle couldn’t have meant to kill Gemma.  He storms the courtroom and tells the judge and jury that Belle is innocent but is it all too late?  Unfortunately so.

The jury finds Belle not guilty of murder but guilty of manslaughter and sentence her to 3 years in a youth detention facility.

Meanwhile, Sam has to go to court for his attempt to flee with Belle, but doesn’t want to worry Lisa or Zak any further so decides to face it alone.

With the christening of April looming, Donna’s thoughts turn to her child’s future without her and she is drawn back to bad boy Ross and another dodgy money making opportunity.  This time it’s a jewellery shop that Donna has been to see as part of her crime prevention – oh the irony!

Ross gets the job done with no distractions as per Donna’s information, but as he tries to leave he’s confronted by the elderly shop owner George holding a baseball bat.  A guilty looking Ross is next seen washing blood from his hands back at his house – hey you should see the other guy.

It’s the launch of Bernice’s new salon ‘Beauty & Bernice’ this week and Kerry has rounded up the villagers to come for a glass of bubbly and see the new place.  Andy can’t keep away from Bernice who has tried to push him away after a few quips from Victoria and Nicola made her think she was being stupid.  He wins a free spray tan and is soon showing off his gorgeous, beefcake body in the back room with Bernice’s tanning gun going off in her hands (it is a good body!) and soon the pair are locked in an embrace.

Kerry decides the pair have had long enough and opens the doors to reveal the semi-naked, snogging pair to the room.  In a panic, Andy insults Bernice by saying that nothing has been going on and this is a one-off mistake.  He then spends the rest of the week trying to win her back without success.

Elsewhere…
Harriet keeps her job when Ashleigh asks to have a private word with the church council and tells them how foolish they’d be to let her go.  Not being privy to the conversation she accuses him of belittling her and then in the heat of the moment plants a kiss on his lips.  Coming to her senses quickly, she apologises and says it was a mistake leaving both thinking the opposite.

Priya drives a wedge between Alicia and David when she leans on him to help with a crying Amba, leaving him sleeping when he was supposed to be doing the father and son race with Jacob at his school’s sports day.  Alicia confronts Priya and tells her to back off David, leading Priya to ask dad Rishi to sort an arranged marriage for her.

Dom rides off into the sunset as he says goodbye to the village following the judgement on Belle.

The Week Ahead
Donna is sent into a panic when she sees what damage Ross has done to kindly jewellery shop owner George and plans to flee the village with April.

Jai is having financial worries at the factory leading to Megan making him a business proposition.

Bernice gives Andy another chance but only if they can do it as official boyfriend and girlfriend.