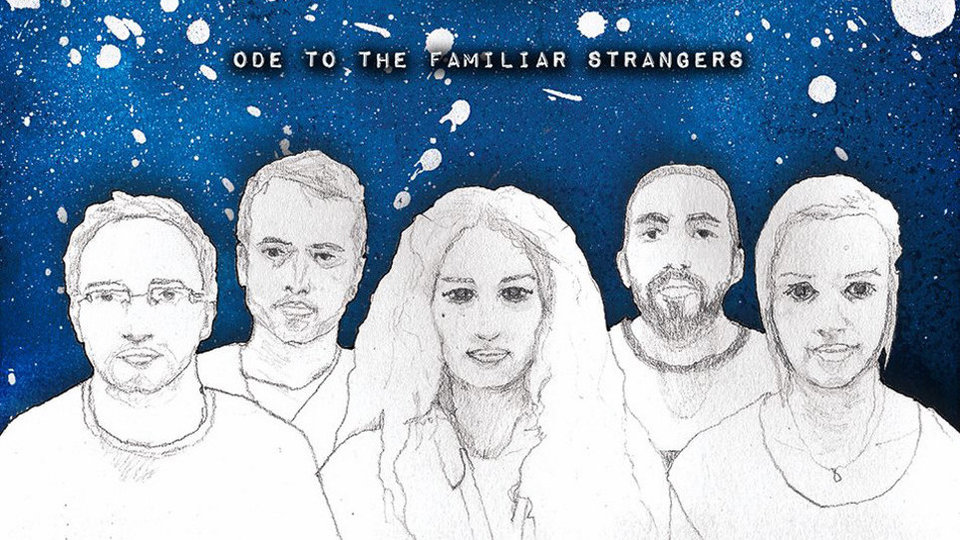 Echo Trails is a five-piece band based in London via Cambridge. All band members’ have different musical backgrounds covering genres such as jazz, Greek, Eastern European and gypsy folk. Their debut album, Ode To The Familiar Strangers is self-produced and set for release this month. We had a listen and here are our thoughts.

All About The Cloudless Skies is up first. The track showcases various music instruments and obvious Kate Bush influences are there. The band makes interesting music combinations in its songs giving them interesting twists but also verging on the annoying and pretentious.

Weightless starts with a long intro, which again might feel a bit pretentious but we can see it working really well live. This is the longest track on the album and as such it takes a while to shape up. Unfortunately it takes too long and by the time Weightless has gained a bit of power we’re bored and need to move on to the next track.  For us it’s simply too long and doesn’t work.

Ode To A Familiar Stranger sounds aptly nostalgic and Dimitra has a beautiful voice accompanying it. Ultimately there is something a bit old fashioned about the track, that takes you back to the less good part of the nineties.

Echo Trails exotic influences are apparent on track, Hazy Horizons. We enjoy this song and its wild side. We can imagine this track being rather popular at folk festivals.

Echo Trails show their softer side on their sexy and heartbreaking ballad, Love Me & Leave Me. Dimitra has a stunning voice, which is both commanding and fragile and at times will remind you of Shakira’s.

Last but not least on the album is The Neurotic Eposodic, a vibrant track that ends the album with a high. The violin gives the song its gypsy folk sound and is the real star. The few vocals are refreshing and let the instruments rightfully shine.

Echo Trails’ debut album, Ode to A Familiar Stranger is distinctive and very folky. You can hear the band’s interesting musical backgrounds and passion, which is lovely. The tracks feel small on the album and sound like they would be more suitable for live shows and festivals. Sometimes music is just better live than on CD and this is one of these occasions.

Advertisement. Scroll to continue reading.
In this article:Echo Trails, Ode To The Familiar Strangers