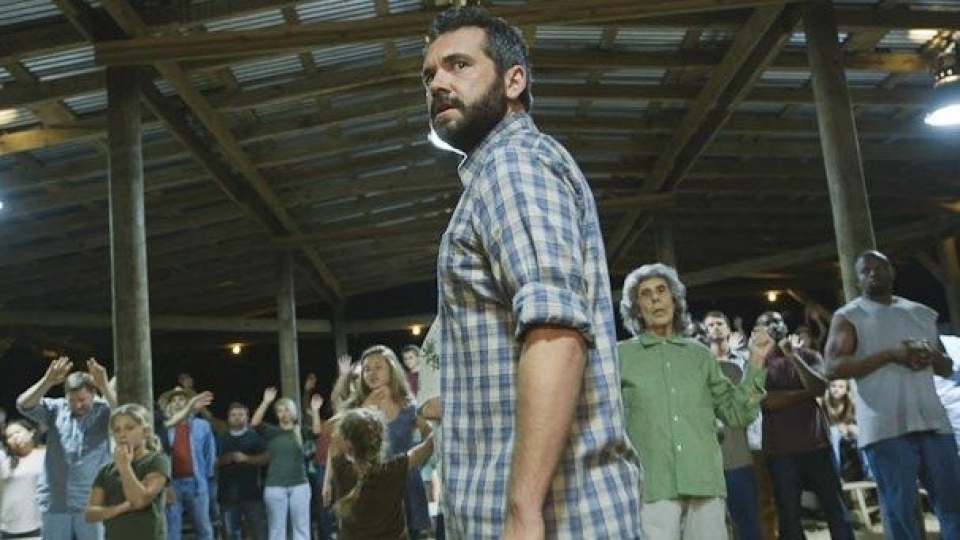 Hip, cool fashion photographer Patrick (Kentucker Audley) receives a bizarre note from his sister, who has left the United States of America to live in a small rural community. His employers at Vice Magazine decide it would make a very interesting feature for their website; coming along with Patrick is Sam (AJ Bowen) and Jake (Joe Swanberg). Once at the community they soon discover that life may be tranquil but there is an underlying presence from the ‘Father’ (Gene Jones), who seems to have complete control over his congregation. Over the next twelve hours the community, and the journalists, will experience life changing events.

Director Ti West gave us the amazingly retro House Of The Devil back in 2009, the followed that with The Innkeepers in 2011. He also directed segments from horror anthologies V/H/S and The ABC’s of Death, so it’s safe to say he knows his way around scary movies. However, The Sacrament isn’t a horror film in the traditional sense of things that go bump in the dark. Instead it’s a precision master-class in how to build tension with every growing moment.

With each passing curious moment in the storyline we could feel the tension mount up. Sure, the ending can be foreseen from the beginning, but it plays out so well that we were just getting more and more caught up in breathless emotion. By the time the ending does come (and it comes in unrelenting waves) we felt like our heart was going to stop.

Kentucker Audley and AJ Bowen equip themselves very well in the main roles; Bowen especially seems caught off guard with every waking turn. Ti West’s close friend and fellow film-maker Joe Swanberg gets one of the roughest rides as he is constantly called to film everything no matter his urgency to do the opposite. Swanberg can deliver these roles with such ease that it’s a joy to watch him be terrified. Yet it’s Gene Jones, who plays the Father, that has this film in the palm of his hand. His ability to seem like the friendly father soon turns to a strangely didactic person with a snivelling tongue that brings to mind Martin from Human Centipede 2. His demeanour only adds to the feeling that we aren’t here for what we were lead to believe.

Sure there are a couple of niggles with the story, like how many camera angles are there when really they are only shooting on one or two cameras. Also some of the community members seem a little too haphazard in their coming forward to be interview. These are minor quibbles that do not detract from the main focus.

The Sacrament is Ti West’s finest film to date that wonderfully crafts an all-too-real story into a tension filled ninety minutes that grabs your throat and never let’s go. This is documentary-horror with shades of Apocalypse Now.

Advertisement. Scroll to continue reading.
In this article:The Sacrament