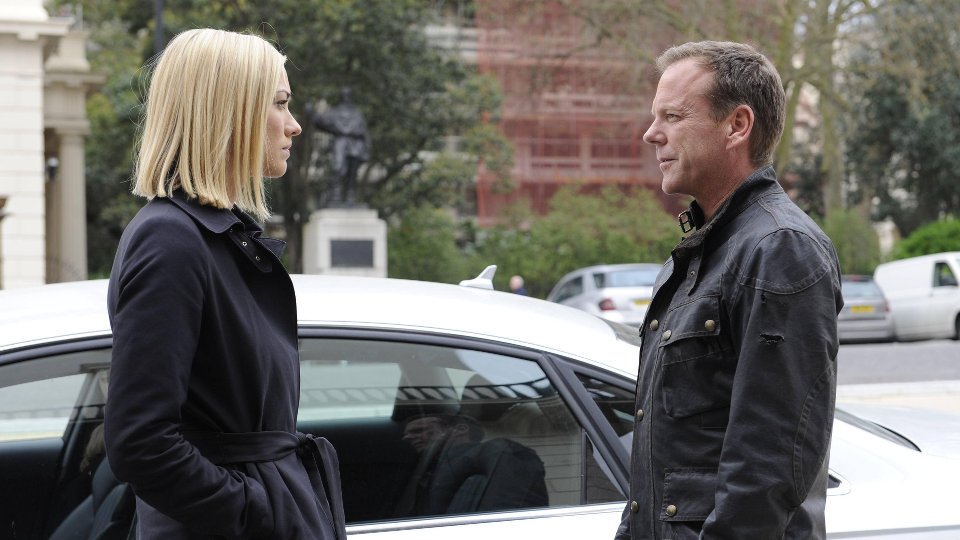 The expected but always surprising twist took place in tonight’s 24: Live Another Day as someone was seemingly revealed to be a mole.

If you haven’t seen the latest episode of 24: Live Another Day and don’t want to read any spoilers we suggest you stop reading now. If you have seen it and want to relive the action then keep reading.

Tonight’s action took place between 4:00pm and 5:00pm picking up after the drone attack on the CIA raid by Margot Al-Harazi (Michelle Fairley) and her family. The episode quickly established that Navarro (Benjamin Bratt) and Erik (Gbenga Akinnagbe) escaped with their lives although the latter had some minor burns.

The attack of course didn’t go down with the Prime Minister (Stephen Fry) whose relationship with President Heller (William Devane) deteriorated further. Demanding to have full access to all the information the US had, the Prime Minister hastily left the President to return to his office. On his way out his interfering staffer Caroline (Miranda Raison) revealed that she had heard rumours that Heller was battling Alzheimer’s.

Desperate to get the Prime Minister back on side and avoid any further attacks, Heller called upon Jack (Kiefer Sutherland) to try and get the information from him about Margot’s arms dealer. Jack refused to budge saying he wouldn’t give the information and he wanted to be allowed to go into the field on the condition he turned himself in once his mission was over. His other request was that he was assigned Kate Morgan (Yvonne Strahovski) to go with him.

The President appealed to Navarro who at first refused but then agreed to put Kate back in action. Over at the CIA a worried Jordan (Giles Matthey) broke the news to Kate who agreed to join Jack on his mission.

Before Jack left to meet Kate and track down arms dealer Rask (Aksel Hennie) he had an encounter with Mark Boudreau (Tate Donovan) who pressed Jack to find out what Audrey had said to him. Jack assured Mark that Audrey said he was ‘a good man’ and left it at that. Smooth Jack. Smooth.

Heller informed the Prime Minister of Jack’s covert mission and asked that he not try to interfere or monitor Jack. Of course after more stirring from Caroline the Prime Minister arranged for an MI5 team to head to Jack’s location.

Jack and Kate, with the help of Chloe, were on their way to Rask to plant a virus that would allow them access to his bank account in the hope of finding Margot. Jack explained to Kate that he needed to hand her over to Rask with the story that she was a CIA agent working with Derrick Yates (Joseph Millson) to blow the operation to take the suspicion off himself for blowing the whistle. Kate agreed and injected herself with a drug to knock her out.

Upon arriving at Rask’s location a shootout took place before Jack revealed he had Kate to hand over who could give him vital information. Not counting on them getting to the point of interrogation, Jack was worried when Rask revealed they could reverse the effects of the drug to wake her up. As Jack was trying to get Rask to login to his bank account to place the virus, Kate was given a nasty wake-up call and tortured in another room.

Jack’s accomplice Belcheck (Branko Tomovic) had Kate in his sights as he watched from a near-by rooftop with a sniper. Upon nearly pulling the trigger he was knocked off by MI5 who then swamped the warehouse causing another shootout. In the midst of the chaos Kate managed to break free and kill one of her torturers whilst Jack completed the login to Rask’s account giving Chloe access.

Once in the account Chloe found a number which she could trace and we discovered belonged to Simone.

Elsewhere in the episode Mark stumbled with the Russians when he tried to rescind the authorisation to hand Jack over to them and Jordan began to piece together evidence that Kate’s husband may have been framed.

What about the Al-Harazi’s this week? Well Margot’s son Ian (Liam Garrigan) continued to move the drones closer to London and Simone (Emily Berrington) found herself with another mission. Still traumatised from watching her husband Naveed (Sacha Dhawan) shot in the head by her mother, Simone was asked to go and meet his sister Farah (Tehmina Sunny) following several calls to Naveed’s phone. Margot was of course paranoid that Naveed had revealed the plan to her and somehow thought sending the always unreliable Simone to fix the problem was a good idea.

Simone met Farah and soon convinced her that all was well but when she reported it back to Margot she was instructed to kill Farah and her young daughter. Agreeing to do so, but clearly not wanting to do it, Simone went back to Farah’s flat. Just as she was about to do the deed she decided to beg Farah to take her daughter and leave which had the reverse effect and spooked her. As Farah tried to call the police Simone stabbed her and was caught by Farah’s daughter who ran out of the house screaming. A chase ensued which ended up with Simone lifeless on the road after being hit by a bus. Will she survive?

The episode drew to a close with Navarro making a private call and seemingly revealing himself as a mole. He planted fake evidence against Kate’s husband for someone and we can only guess who it was he was talking to.

24: Live Another Day continues Mondays 9/8c in the US on FOX and Wednesdays 9pm in the UK on Sky 1 HD.