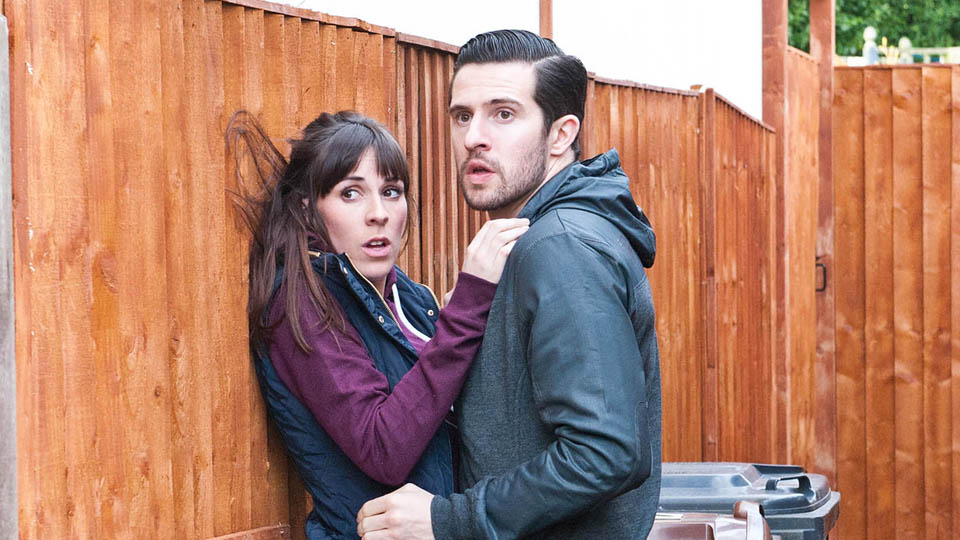 Donna crosses a line this week when her and Ross team up to steal some dodgy jewellery.  But the road to crime isn’t always easy and she hits a few hurdles on the way with Marlon seeing her with Ross and warning her off.  To cover she pretends it’s all part of her plan to catch him out and be a dutiful police officer.  Ross’ big bro Pete, overhears and runs straight to Ross who believes that Donna is trying to set him up.

It is make or break time when the pair go to rob a criminal’s house that Donna has been tipped off about at work.  Ross finally realises Donna’s for real and not trying to set him up.   What’s more the elated pair end up celebrating by getting very friendly back at Ross’ place.  Something Donna then tries to claim was a mistake but Ross charms his lips on to hers again in the garage.

Chas uses her best assets this week to make James notice her – that’s right she puts on her LBD with cleavage aplenty!  At first it seems the trick has worked but James is preoccupied with Adam and is soon back in the bar talking to him.  Chas decides to show her disappointment by pouring his pint into his lap, leaving him to buy out the local florist to apologise.

Things seem to be back on track when the pair enjoy a romantic meal at the B&B and a few too many drinks lead the pair to truth or dare.  James vaguely explains what happened with his ex-wife and then the pair come to loggerheads talking about Chas’ son Aaron who is on the run for arson (except he didn’t do it and was covering for Adam).

Chas talks to Aaron on the phone and gets his permission to tell James everything.  James appreciates her honesty and lead to him telling her that Adam is his son.  Little does he expect that upon hearing this news, Chas will be determined to tell Cain.

Declan hounds Megan about her reason for quitting the business and Home Farm but doesn’t like it when she finally tells him the truth about the accident with Charity that she thinks caused the miscarriage (which was of course a planned abortion).   The truth forces Declan to choose his sister or his new bride and he takes little time in deciding to stick with Charity and tells Megan he wants her out soon as possible.

Elsewhere…
Poor Robbie, he tries to do a noble thing by telling Declan it was him who stole the credit card and therefore protecting the true culprit Finn.  The result is Declan wants him to move out of the cottage he owns leaving Robbie homeless and sleeping in the back of a lorry.

Speaking of Finn, his new romance with Simon comes to an abrupt end this week when the truth about his identity comes spilling out in The Woolpack.

Debbie tries to tell Pete about her making a pass at Ross but ends up bottling it and is now heading to Spain with Diane and the kids to escape for a while.

In one of the most ridiculous storylines for a while, Kerry finds an unlikely new friend when a French cyclist crashes into the village, leaving Dan seeing green.  All this is of course no doubt to set up the Tour De France hitting Yorkshire in July.  The soap recently revealed Victoria Pendleton will be making a guest appearance in the show around that time.

The Week Ahead
Moira locks herself and Chas in the cellar and pleads with her not to tell Cain about her and James’ one night stand and the son that was the result of it.

Eric arranges a fundraiser for the Valerie Pollard Foundation for HIV that he’s secretly been setting up.  The event includes him doing a skydive but will he make it out of the plane and will the gesture bring the recently divorced but stubborn pair back together?

Lisa suggests to Zak that they do a runner with Belle as her court date creeps nearer and upon overhearing Sam decides to take matters into his own hands.  Will Belle flee or face her judgement in court, it all goes off next week.