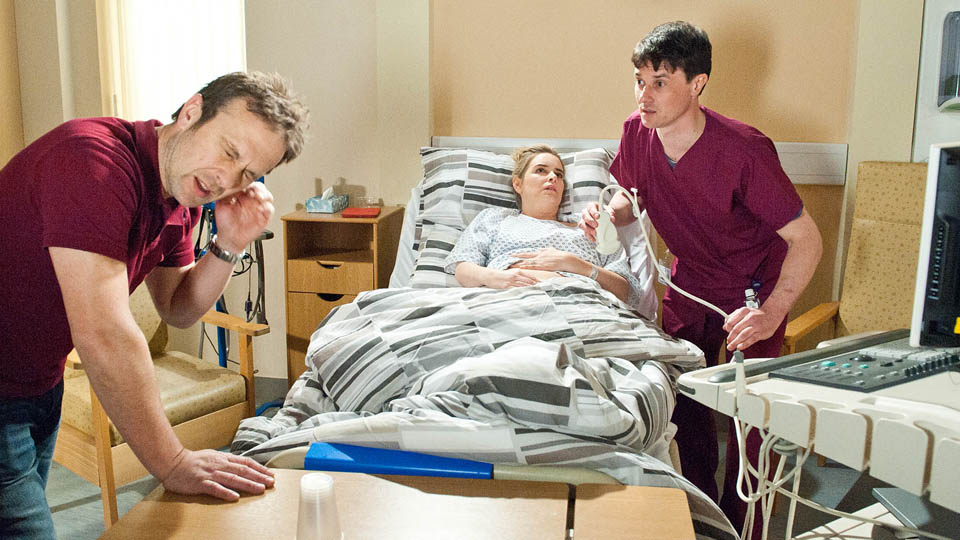 It was looking like her honeymoon may have put paid to her abortion plans but, quick-thinking Charity manages to  misplace her passport and the trip is stalled, allowing her to get the medication to terminate her pregnancy.  She also finds a convenient scapegoat when Megan causes her to fall when the pair are arguing and she shrugs off Charity’s grip.

Declan is devastated about the miscarriage, much more so than Charity imagined and she decides not to mention the incident with Megan for fear of him lashing out.  However, Megan can’t handle the guilt and in an act of desperation decides to resign and tell Declan she won’t be moving in to home farm when it reopens.

Donna takes on more than she can handle with Ross

Still trying to find a way to shift stolen jewellery, that she took from the police station, Donna tries to recruit Ross but her approaches only confuse him.  He thinks she’s trying to set him up in a police sting operation and decides to get payback by locking her in the garage before telling her that he wants no part of whatever scheme she’s plotting.  Dejected, Donna  puts the stolen loot in a dumpster and admits defeat.

Baby Amba is on the mend

Priya is rushed to hospital following her giving birth to baby Amba in the back of Alicia’s car.  After breathing difficulties in the car, Amba is put in intensive care and has the family worried if she’ll pull through and causing Priya’s eating disorder to flair up when she blames herself for the premature birth.

Luckily the hospital manage to stabilise Amba and get her on the mend and Priya starts to eat a little too.  In fact Priya seems very happy, she’s got her new baby girl and David with her nearly every minute of the day.  The perfect family unit she wanted except that David is not hers any more.  Alicia is feeling pushed out by David being at the hospital and Jai is worried that Priya is heading for heartbreak again when she realises that David isn’t in love with her.

Elsewhere
Worried he’ll spill the beans to Adam about his parentage, Moira welcomes James back to work together at the farm ruffling Adam’s feathers but pleasing Debbie and Chas who get to keep their men in the village.

Kerry’s left heartbroken when Dan says he doesn’t want to get married, telling him they are through after he proposes in the pub with those romantic words every girl wants to hear ‘you wore me down’.  Shame as she’s got through the first round of the wedding competition she entered.

Finn plays at Declan again this week to impress new love interest Simon and egged on by Robbie, he nearly gets caught out when an angry builder comes to home farm demanding cash from the faux Declan.

Ross changes his mind about Donna but is she ready to get so deep?

Chas sets out to bring James closer leaving him torn about coming clean about his big secret.

Declan is forced to pick a side.