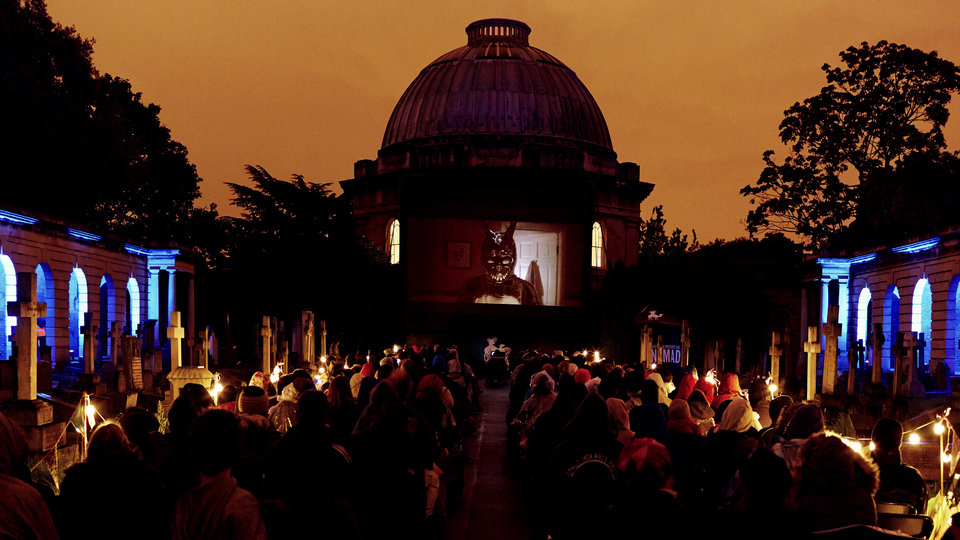 The on-going love affair with London’s great outdoors continues as The Nomad Cinema returns for a 2014 with a line-up full of classics.

Returning to favourite Nomad locations and adding some exciting new venues along the way, you can catch the roaming pop-up at Coram Secret Garden, Queen’s Park, Fulham Palace and The Royal Parks – including Bushy Park, Hyde Park Lido and the especially eerie Brompton Cemetery. Check out their new website here.

The first of the new partnerships announced for this summer is the new Grosvenor Film Festival in association with Chesterton Humberts, taking place in the beautiful Belgrave Square followed by the enigmatic Grosvenor Square – two of London’s most elegant and secluded squares, which will open up exclusively for Nomad audiences looking for a special sprinkling of movie magic.

Belgrave Square opens the summer season with family favourite The Jungle Book and the Bogart / Bergman classic romance Casablanca. Then hopping across Mayfair to Grosvenor Square for a two-week ‘Summer in the Square’ festival with evening movies they’ll be featuring the timeless Bond classic Goldfinger followed by rom-com favourites Four Weddings And A Funeral and When Harry Met Sally then rounding off with Tom Cruise’s Top Gun.

One of the most coveted locations on The Nomad summer calendar is most definitely the beautifully eerie Brompton Cemetery, which forms part of the Nomad’s series of pop-up screenings with The Royal Parks and The Royal Parks Foundation, returning for a fourth year with two dates to satisfy popular demand. The Nomad goes a little darker with its ‘Dark Cities’ themed selection: ground-breaking ‘bullet-time’ sci-fi masterpiece The Matrix and Christopher Nolan’s brooding Batman sequel The Dark Knight.

The serenely beautiful Hyde Park Lido concludes The Royal Parks’ pop-ups with our ‘Glamour On The Rocks’ selection: The Talented Mr Ripley starring the very talented Matt Damon and Jude Law followed by the award winning Breakfast at Tiffany’s , which stars the late Audrey Hepburn and George Peppard.

Meanwhile at Fulham Palace, also getting the magical Nomad treatment for a fourth year running, this year has an All Singin’ All Dancin’ theme on a season of Thursdays through August and September with the UK’s no.1 favourite Dirty Dancing, Bacon and SJP at their youngest and best in Footloose and (hopefully not literally) Singin’ In The Rain with the ultimate musical star Gene Kelly.

Coram Secret Garden is one of those magical undiscovered spots in London that is rarely opened up to the public. Home to the oldest running children’s charity in London, this intimate, hidden site will be full of imagination and tales of coming-of-age as the kids in these films defy their elders and set out to fulfil their own destinies. Showing John Waters’ original 1988 dance musical Hairspray starring Ricki Lake, Divine, Sonny Bono and Debbie Harry, followed by a special screening of 80s cult blockbuster The Goonies.

Queen’s Park gets a smattering of epic, pop-cult, ultimate chick flick and enduring classic with Jurassic Park, Thelma & Louise, Pulp Fiction, and Cinema Paradiso, the much-loved, award-winning tribute to the transformative power of cinema – a fitting finale to the season of summer pop-up.

Not only does the Nomad bring fantastic films for all and a friendly festival feel, but also delicious food, fabulous drinks, and delightful freebies. Alongside gourmet food and drink vendors available at all locations, The Nomad has partnered up with a variety of thoughtful brands to bring together a lovely little goodie bag for all Nomad audiences to enjoy. These partners include Divine Chocolate, Firefly Natural Drinks, Alma de Cuba coffee, Liberation Nuts, and Crosta & Mollica. So by all means pack your picnic, but if planning ahead isn’t your thing, rest assured that all events will be very well catered and you’ll be treated to some delectable goodies on arrival too.

Also new for this season will be the special ‘Magic Carpet’ ticket at selected events where, for a little extra cost, you can upgrade your ticket for a lovingly decorated and decked-out picnic spot in a prime viewing area for some extra comfort and luxury, all without the hassle of queuing, carrying heavy bags and worrying about nabbing the best spot! On your fairy-lit magic carpet you’ll find blankets, back supports, lanterns and goodies, all awaiting your arrival to fly you into the magical world of film.

For those fancying a little indoor comfort, The Nomad’s residency at the Hoxton Hotel continues with its Slackers Lounge screenings of When Harry Met Sally in June followed by Grease in July.

And if anyone thought that pop-up cinema was just for the summer months, they’d be wrong… The Nomad has been busy throughout the winter months with residencies at the Hoxton Hotel and The Royal Parks Foundation’s Isis Centre with a fine array of Halloween, Christmas and Valentines specials and is all set for more special outings for the next Autumn, Winter and Spring seasons too. Nomad has also taken its pop-up expertise on tour with the Barbican and Create to co-produce their Hitchcock’s East End season of films, which continues over the coming months.

And finally a reminder of the Nomad Cinema’s fundamental mission: not only has it earned its reputation as ‘London’s best outdoor cinema’, popping up at an inspiring range of beautiful, varied and unique screening locations across London and beyond, it donates 100% of its profits to pioneering charity The Sustainability Institute in South Africa – an eco-village and research centre, working towards providing ways of living with a focus on reducing and eradicating poverty. The Sustainability Institute has built schools and created a wide range of educational projects and development programmes enabling the disadvantaged children of the local community to have a much better start in life. In particular, The Nomad and sister cinema The Lexi have funded a film school where students have excelled and gone on to earn their place at international universities.

*more venues and dates will be added*

Tickets for outdoor events range from £12 – £18 with concession and family prices available on selected screenings. Full details on prices and times are available at whereisthenomad.com. Magic Carpet upgrades available at selected events will cost an extra £10 on top of the standard ticket price. At Belgrave Square screenings, a limited number of premium tickets will be available and will include gourmet bespoke picnics created by local restaurant Mosimann’s (pre-booked only).

The Nomad Cinema runs across the summer during 2014.

In this article:Summer Films 2014, The Nomad Cinema