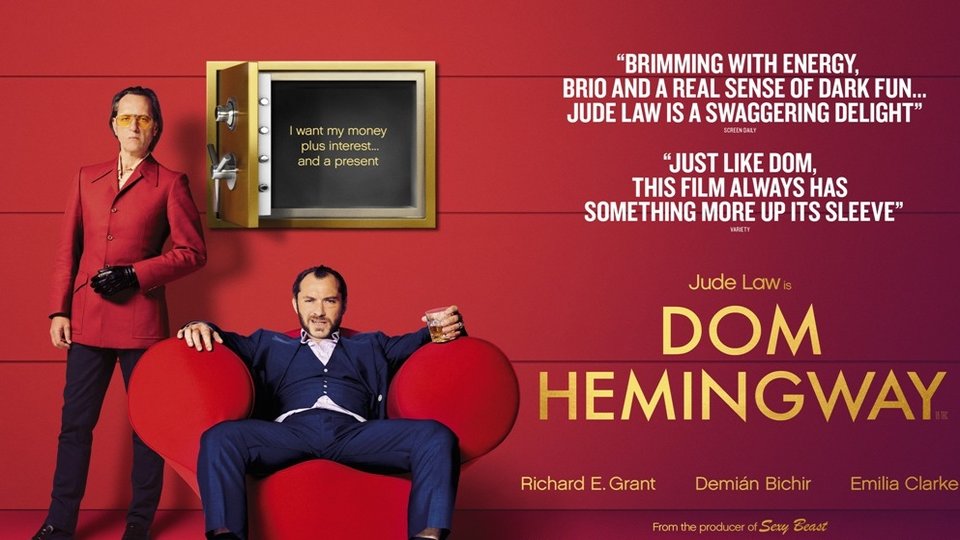 Cockney safe-cracker Dom Hemingway (Jude Law) has been released from prison after serving 12 years for refusing to spill the beans. Eager to collect his reward for being silent whilst in prison from mob boss Mr Fontaine (Demain Bichir), Dom heads to the south of France with his long time friend and accomplice Dickie (Richard E. Grant). After he emerges from a haze of drink, drugs and women, Dom decides to re-establish a relationship with his estranged daughter Evelyn (Emilia Clarke). But Dom’s life is never straight forward.

Several years ago Jude Law was pushing to be a Hollywood A-lister. But something seemed to happen and he returned to the smaller, low budget affairs he had previously made until Guy Ritchie cast him in his adaptation of Sherlock Holmes alongside Robert Downey Jr. Dom Hemingway’s smaller indie-feel suits Law’s new style perfectly, playing against the upper class Brit he was stereotyped as for many ryears.

Here we see him get his cockney geezer swagger on with his loud mouth expletives thrown around without care. Law’s Dom, with his slicked back hair and tight grey trousers, walks and talks with rapid quick fire bursts. No sooner is he finished than he starts up again. His attitude to his freedom is hilarious as he snorts and shags his way through London with charm and ease.

For all his bravado, that at time evokes Begbie from Trainspotting, his mate Dickie is the complete opposite. Calm and composed thanks to his older years, both of them manage to shout and scream swear-words at each other throughout the film. Law and Grant must have had an absolute blast filming these scenes – just letting rip on each other with profanity after profanity. It’s hilariously naughty.

The London scenes are the best scenes of the film, but it falls down when relocating to France. During the stint in the French Rivera it seems to get confused as to what direction the film should be taking. The film throws around different set pieces, whilst in France, to see what sticks  – and really none of it does. It’s all a bit messy for such a simplistic crime storyline. We also never truly get to the bottom of why Dom is such a safe cracking mastermind, much is implied but nothing is fully forthcoming. One other downside is, apart from Dom, none of the other cast really goes for it in terms of filthy language. We just wanted them to dial it up one more notch and get all Shaun Ryder on us.

Dom Hemingway is a funny and rude crime caper. Law dishes out the naughty every time he opens his mouth. The middle section loses track for a while, but it later returns thanks to Law’s old English cockney geezer banter. It’s like a mix of Lock, Stock…..and Minder. It sounds bizarre, but works.