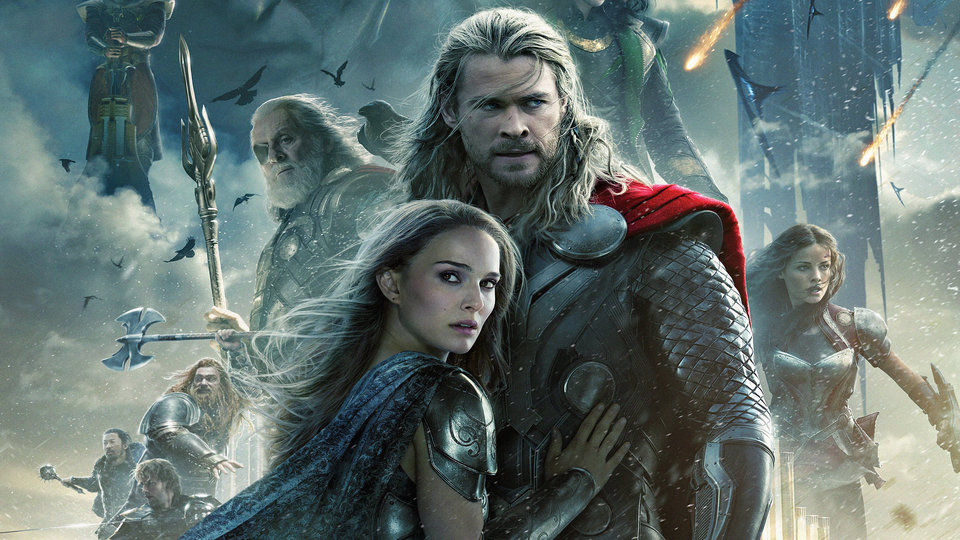 Thor (Chris Hemsworth – Rush) is called into battle once again when a forgotten enemy is reawakened, looking to plunge the Nine Realms into eternal darkness. Thor must also contend with his half-brother Loki (Tom Hiddleston – Only Lovers Left Alive), who is now in prison for his past crimes. Jane Foster (Natalie Portman – Black Swan) is also back on the scene as the thunder god struggles to balance his duties to the throne of Asgard with his desire to be with a mortal woman.

Marvel’s Phase 2 hasn’t really taken off as expected. As humorous as Iron Man 3 was, the story was pretty thin and the same can be said about Thor: The Dark World. It’s an entertaining caper that certainly provides humour and action but it doesn’t really get going, leaving its potentially great set-up unexplored and under-utilised.

The film has a decent premise, with an ancient race of Dark Elves waging an age-old war against the Asgardians. Throw in the great Christopher Ecclestone as Malekith, the leader of the Elves, and you have a very solid foundation to build a movie from. But Thor: The Dark World repeatedly fails to push on and leaves this whole project feeling like a big missed opportunity.

Despite the story’s shortcomings, the cast all deliver their A game once again with Chris Hemsworth quite brilliant as Thor. He’s got the perfect balance of brooding thunder god and understated joker down, which helps him elevate the film a few notches just thanks to his leading magnetism. His chemistry with every character is also well utilised.

The supporting cast are all fine with Stellan Skarsgård and Kat Dennings on hand for good comic relief. Chris O’Dowd also shows up in a noteworthy cameo. If you are looking for more serious turns, Sir Anthony Hopkins and Rene Russo dutifully oblige. Natalie Portman’s Jane Foster is a bit directionless in this movie though, with her role relegated to a glorified damsel in distress which was a shame to see.

As good as everyone is, Tom Hiddleston continues to steal his scenes with many of the best lines going to him. His gleeful malice is played very well and the verbal (and sometimes physical) exchanges between the adopted brothers are nothing but a joy to watch. Both Hiddleston and Hemsworth have a wonderful chemistry that makes these characters stand out from other Marvel heroes and villains.

London, and in particular Greenwich, play a big starring role in this sequel and that’s great to see. A breathtaking battle at the Royal Naval College in Greenwich is brilliantly visceral as are the gags that find Thor randomly transported to various different locations during a fight, such as St. Paul’s Cathedral, the Gherkin and even Charing Cross Underground Station! It’s nice to see Marvel make these movies a global affair and our fair capital city does us proud yet again.

It seems that the movies that make up Phase 2 of Marvel’s master-plan are more than happy with just being an establishing project geared towards the sequel to The Avengers: Age Of Ultron. Whilst that’s good in the grand scheme of things, it doesn’t help with the rest of these characters individual franchises. With so much comic history to draw from, its not unreasonable to expect a lot more from these chapters.

With Kenneth Branagh’s absence certainly felt and a story that’s too simplistic given what’s come before, Thor: The Dark World is a bit of a letdown. Chris Hemsworth and co. are all excellent though and continue to command the screen and make the journey enjoyable. It’s just a shame that after such a long and hard battle to establish Thor as a viable and attractive superhero, the sequel is so eager to play it save. Thor: The Dark World is certainly worth a watch but it’s not one of Marvel’s instant classics.