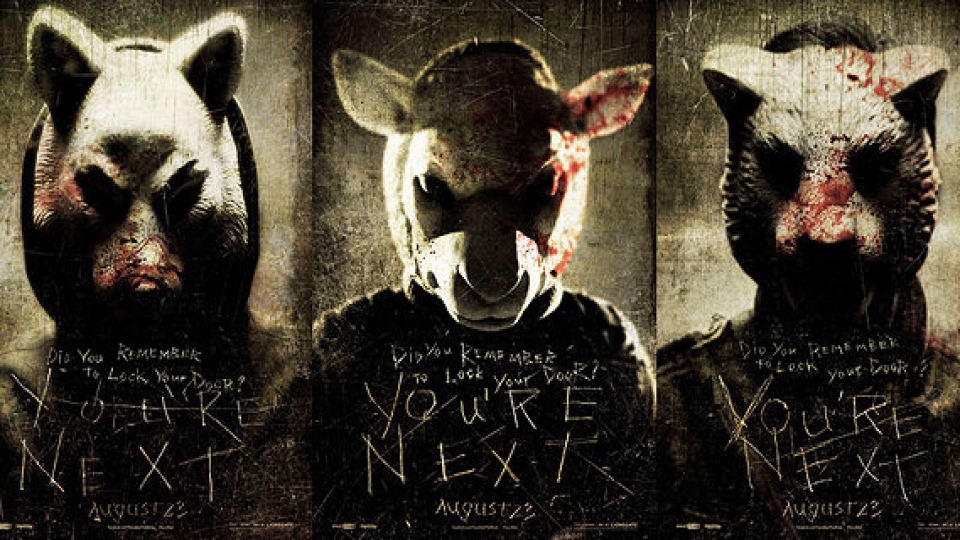 Crispian (AJ Bowen – Hatchet II) brings his new girlfriend Erin (Sharni Vinson – Step Up 3D) around to the family home for a long weekend. If meeting all of her boyfriend’s family in one go wasn’t daunting enough, a mysterious group of killers are lurking in the woods and won’t stop until everyone in the house is dead. So Erin steps up to defend them all and in the process learns just what kind of a family she has been introduced to.

You’re Next comes from the horror stable of Adam Wingard, Ti West and Joe Swanberg and is written by Simon Barrett. The ad campaigns are suitably scary with the animal masks painting a pretty horrific picture of what might happen in this movie. Sadly, after a bright start, the film turns from a genuine horror story into a black comedy slasher flick, where both the victims and the protagonists become fair game. It’s an interesting premise and there is fun to be had working out who will get whom first, but it’s more amusing than scary.

Sharni Vinson leads the film very well as our heroine . The Step Up 3D actress feels quite at home here and is a joy to watch throughout. Hopefully this starring role will mark a few more big projects for the Australian native who handles herself impressively as Erin.

The rest of the cast are all caricatures but still manage to raise a few smiles. AJ Bowen is funny as Vinson’s new boyfriend, Joe Swanberg excels at playing a douche-bag whilst Wendy Glenn and Nicholas Tucci give the film an oddball double-act that poses more telling questions to the audience.

Once the carnage starts I thought the film makers would go for broke. Sadly they don’t and the end result doesn’t nearly match the dread you feel at the start when the deaths start to come thick and fast. The eeriness of someone lurking in the house is also lost too soon here.

Once the killers are revealed, they turn into Tom and Jerry and literally fumble around the house in a style not dissimilar to the crooks from Home Alone. Whilst it is sometimes funny (and that’s intentional so that’s fine), I still wanted much more gore and much more genuine horror mixed into this cocktail.

There are a few twists and turns but ultimately You’re Next isn’t as clever as it thinks it is. It’s still an enjoyable horror romp and the cast are all excellent. But after the dust settles, it’s just another slasher film with aspirations of being more.

In this article:Sharni Vinson, You're Next