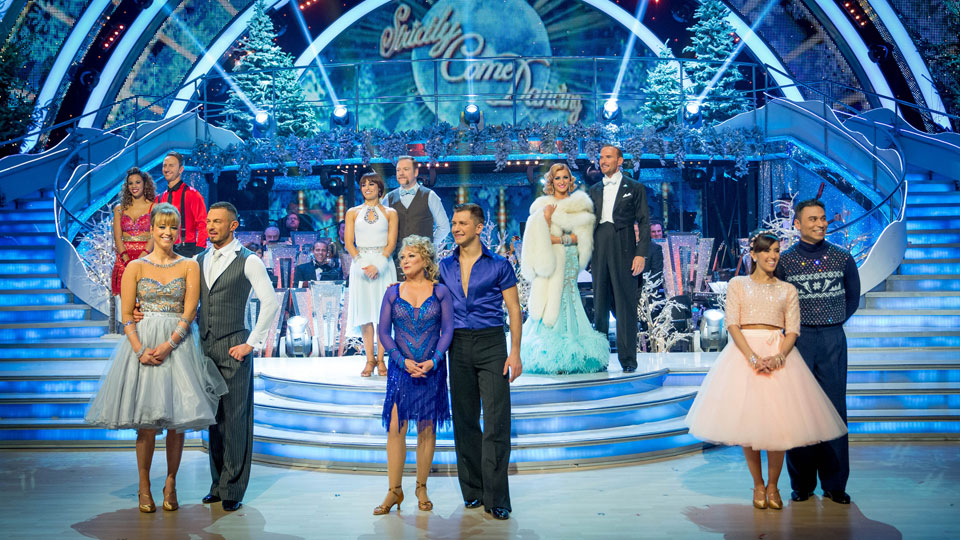 Strictly Come Dancing may be over for 2013 but that doesn’t mean it’s off our screens for good. Every year the show enjoys a Christmas special which is the point of the day where everyone is stuffed and needs to relax with the family for a bit.

This year’s special started with a pro dance at Lapland UK before introducing the six celebrities who would be competing for the festive Glitterball Trophy. What a spectacular start to what promises to be the best festive special yet.

Kicking off the Christmas special this year was EastEnders actor Ricky Norwood and his pro partner Janette Manrara. In his intro VT Ricky admitted he was delighted to be partnered with Janette. He admitted he had a little bit of dance experience but said that learning ballroom was completely different. Ricky revealed that perfecting his posture has been his biggest challenge in the training room. He started his Quickstep by snowboarding onto the dancefloor.

Len explained that there are no rules for the Christmas special and admitted that lifts were allowed. He said the dance started great but lost energy in the middle of the routine. Bruno said he liked that Ricky kept the dance current and told him he really enjoyed it. Craig said Ricky used his shoulder to lead the dance but admitted he loved the entrance. Darcey said she enjoyed the Quickstep part of the routine.

Ricky and Janette scored 33 out of 40 from the judges.

Second to dance during the show was West End legend Elaine Paige and her partner Pasha Kovalev. In her intro VT Elaine said she loved the glamour and the costumes, and revealed she was very happy to be dancing with Pasha. In the training room Elaine was struggling to keep her laughter under control. She also struggled with the lifts. Did Elaine manage to pull it all together for her Cha Cha?

Bruno said that it was ‘carry on Christmas’ with Elaine and complimented her performance level. Craig said he expected Elaine to be brilliant and told her she lived up to his expectations. Darcey called her a ‘little mover’ and told Elaine that she took control of Pasha. Len said that Elaine ‘jingled’ his bells and told her she did a wonderful job.

Elaine and Pasha scored 39 out of 40 from the judges.

The third couple to dance tonight was DJ Sara Cox and her partner Robin Windsor. In her intro VT Sara revealed how she likes to spend Christmas and said this year she was going to be sparkly. She admitted that she was struggling to be graceful as she’s not a naturally elegant person. Robin said that he had to teach Sara to be led rather than to lead. Did Sara perfect her gracefulness for her Waltz?

Sara and Robin scored 33 out of 40 from the judges.

The Saturdays’ singer Rochelle Humes was the next to dance and she’s had a bit of experience with Strictly before having danced against Harry Judd during a Comic Relief special. Rochelle was dancing with Ian Waite and admitted in her intro VT that she thinks people just expect her to be a good dancer. During training Rochelle took her young baby with her as she attempted to learn the Salsa. Did she pick up all the moves?

Darcey kicked off the comments and said it was ‘a cracker of a Salsa with plenty of hip action’ but told her the footwork was a bit wild. Len said Rochelle ‘went to town’ and likened the routine to a ‘party popper’ telling her she got a bit messy in parts. Bruno said Rochelle was ‘full of spirit’. Craig said it was ‘all over the toy shop’ but told Rochelle he was pleased she went for it.

Rochelle and Ian scored 31 out of 40 from the judges.

The penultimate couple to dance was Matt Goss and his partner Aliona Vilani. Dancing in the ballroom was a long way from Vegas where Matt is used to performing these days. Matt fit in training alongside his shows which Aliona admitted had been tough. Matt admitted that he didn’t have a clue what he was doing in the rehearsal room. Did he learn the steps for his American Smooth?

Matt and Aliona scored 35 out of 40 from the judges.

Last to dance tonight was Rufus Hound and his partner Flavia Cacace. The comedian has won a dance show before when he performed as Cheryl Cole on Let’s Dance for Comic Relief. Flavia has returned to the ballroom after leaving the show earlier this year to concentrate on other projects. Rufus and Flavia danced the Tango? Could he claim another dancefloor victory?

Rufus and Flavia scored 38 out of 40 from the judges.

Now that everyone had danced it was over to the studio audience to have their vote but first there was a performance from choirboy Jack Topping who sang his new single Tomorrow. Karen Hauer and Pasha Kovalev took to the ballroom to dance whilst Jack performed.

The stars of this year’s series of Strictly visited a children’s hospital to spread some festive cheer and entertain some of the kids. Janette Manrara and Kevin Clifton performed for people at the hospital putting a smile on everyone’s faces.

The leaderboard for the special was:

The winner of the Christmas Special was Rufus Hound and his partner Flavia Cacace. His festive comedy Tango obviously struck the right chord with the studio audience giving the comedian the edge over leaderboard topper Elaine Paige and her partner Pasha Kovalev.

The show came to a close with a group dance featuring all six couples, Anton Du Beke and Karen Hauer.

Strictly Come Dancing will return for a brand new series in the New Year. We’re counting down the days already!