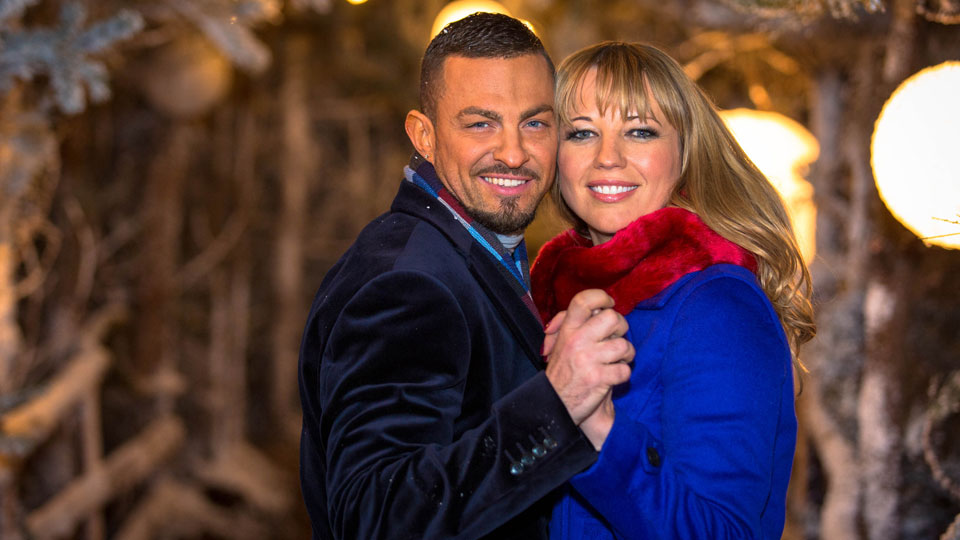 Strictly Come Dancing 2013 came to an end on Saturday night when Abbey Clancy was crowned the Queen of the ballroom.

The four remaining celebrities – Susanna Reid, Natalie Gumede, Sophie Ellis-Bextor and Abbey Clancy – battled it out in one of the most spectacular finals yet.

We caught up with Robin Windsor for our last chat of 2013 to talk about the final, discuss the appeal of Strictly after 11 years, and find out what he’s got coming up in 2014.

The Strictly Come Dancing 2013 final took place at the weekend. How did it feel to be back?

I was so happy and excited to be back dancing for Strictly 2013 final. Not only did I get to be back where I belong but I was dancing in the arms of Deborah and my wonderful Kristina.

What was the atmosphere like in the studio on Saturday night?

The atmosphere in the studio was absolutely electrifying. There was a point where you could have cut the tension with a knife. The anticipation of finding out who was going to be called to collect that Glitterball Trophy was absolutely immense. As soon as they announced Abbey’s name the whole place erupted with joy. I think she thoroughly deserved it, she worked so hard and just fell to the floor with pure exhaustion.

Abbey was without a doubt the surprise of the series. She came into the show with no prior dance training and seemed to be a complete natural…

I think we all expected Abbey to be a bit Bambi-legged and not be able to dance very well. Week after week she began to surprise everybody and just got better and better. That’s down to Aljaz for being such a great professional teacher and bringing out the best in her.

Aljaz did remarkably well for his first year. In fact both he and Kevin Clifton have had a great first year haven’t they?

This year’s final was incredibly emotional with tears from the pros as well as the celebs. Why was it so emotional for everyone this year?

It’s been a long old road this year. Every year you dance on Strictly Come Dancing they want more and more from you, and they try to get the best out of you. This year was harder than any other. At the end of the day you only have to look at the viewing figures just to see that the hard work and determination has made Strictly by far the best show on British television.

The professionals have been going since August and we’re all extremely tired. The celebrities have been going since the beginning of September and they’re all exhausted. I think that all comes to a culmination of emotion. Everyone was so tired and the emotion just came through. They’d worked so hard and just wanted to be the ones to lift that Glitterball. In my opinion all four of them should class themselves as winners because they all worked extremely hard and they all became brilliant.

As you mentioned the viewing figures have been strong again this year despite there being a bit of criticism about the line-up at the beginning of the series. It’s proven to be one of the most popular years…

This year our final was seen by 12.5 million and we’ve had the highest viewing figures in the entire 11 years of the show. The producers are going to be ecstatic and I think that’s just down to having a great format and a great TV show. At the beginning of the series there was a little bit of questioning about the celebrities but as per usual our lady who booked the celebrities knew exactly what she was doing, knew that it was going to be a great series and the viewing figures say it all.

Strictly is just good old-fashioned entertainment isn’t it? What you see is what you get and it’s not trying to trick you like some other reality shows…

The Strictly Come Dancing audience is going up and up because it’s good wholesome, family entertainment that you can sit and watch with your gran, your mum, your grandchildren without having to deal with sob stories. It’s just a happy vibe throughout the entire show and sob stories aren’t what Strictly is about.

The series may be over but we’ve one more slice of Strictly before the end of the year in the form of tomorrow’s Christmas Special. What can you tell us about dancing with Sara Cox?

I’m very, very lucky that I’m dancing with DJ Sara Cox on the Christmas Special which you can see on Christmas Day at 5pm. You’ll be full of turkey and sherry by that time and it’s going to be a great Christmas special. I know it’s going to be the best Christmas special by far as we’ve done some amazing things. We’ve been to Lapland UK and done some filming which was amazing. We played with some reindeer and some huskies, and there was a lot of snow everywhere. It was unbelievable!

There are six celebrities dancing this year and all are absolutely brilliant. I think any of them would do great if they wanted to come on the main show. When I first found out I was dancing with Sara I took one look at her and she had two left feet. After lots of persistence and hard work she became Miss Sparkle.

You always bring the sparkle out in your partners don’t you?

I needed to give her a character to get her into it. We’re dancing the Waltz and because she’s a bit of a tomboy she didn’t know how to be graceful and elegant. I told her she had to be Miss Sparkle on top of the Christmas Tree and float around as if she was on a bed of ice.

What’s coming up for you in 2014? We know you’ve got the Strictly live tour in Jan and Feb…

Coming up in the New Year is the Strictly live tour starting in mid-January and running to mid-February. I can’t wait to dance with Deborah again and of course Kristina. We’ve got a great bunch of people coming on tour. Nicky Byrne from Westlife is making a reappearance and 3 of the 2013 finalists. It’s going to be a great tour and I suggest everyone get down to see it if they want to see their favourites dance.

Past that point everything is a work in progress at the moment. Me and Kristina have got a few things coming up. We’ll be doing the Strictly cruises again in 2014 and I think they kick off in June. Of course my calendar is still on sale too if anyone needs a last minute or late Christmas gift (laughs).

Do you have a message for our readers that have supported you throughout 2013?

I’d like to say thank you to all of Entertainment Focus’ readers for their support. I’ll be back next year doing all these weekly chats once again!

Strictly Come Dancing’s 2013 Christmas Special airs at 5pm on Christmas Day on BBC One and BBC One HD. Robin’s calendar is still available from his website www.robinwindsor.com.