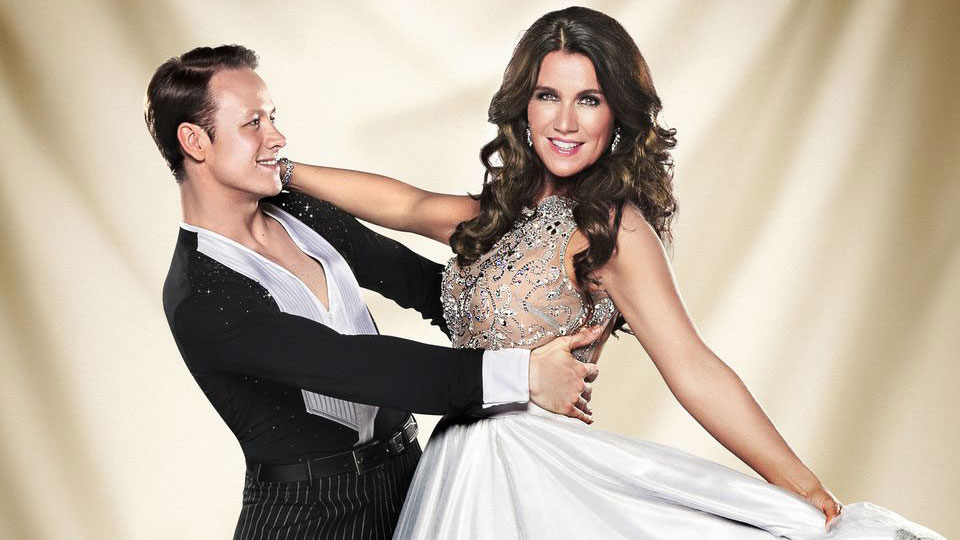 Tonight saw Strictly Come Dancing 2013’s semi-final with the five remaining couples having to dance twice to secure their place in next week’s final.

Last week we said goodbye to Ashley Taylor Dawson and his partner Ola Jordan who lost the dance-off to Patrick Robinson and Anya Garnis. Tonight the pressure was more intense than ever as the couples tried their best to stay in the competition.

Kicking off tonight’s show was Coronation Street star Natalie Gumede and her partner Artem Chigvintsev. Last week they failed to impress the judges with Len expressing disappointment at the routine. In her intro VT Natalie admitted she was struggling to learn two dances in a week. Her first dance of the evening was the Salsa. Did Natalie manage to climb back to the top of the leaderboard?

Casualty’s Patrick Robinson was the second to take to the floor and it must have been daunting to follow Natalie’s full marks. Last week’s steamy Rumba split the judges and Patrick and Anya found themselves in the bottom two despite topping the leaderboard. If Patrick gets through to next week’s final he’ll be the oldest male celebrity ever to get so far. His first dance tonight was the Waltz. Could Patrick win over the public?

Bruno said Patrick placed the dance ‘so well’ but told him there was a couple of issues with the footwork. Craig said it was ‘absolutely gorgeous’ but admitted it could have done with a bit more swing and sway. Darcey said Patrick’s topline had improved and called it a ‘charming waltz’. Len said the routine had a lovely flow and movement before telling Patrick it was ‘absolutely lovely’.

Patrick and Anya scored 36 out of 40 from the judges.

Popstar Sophie Ellis-Bextor won a lot of praise from the judges last week for her Tango. Tonight her first dance with partner Brendan Cole was the Paso Doble. Earlier in the week Sophie went to 10 Downing Street with her fellow Strictly semi-finalists and she took the opportunity to show off her dancing skills. Was Sophie riding high tonight?

Craig said the dance was ‘starchy and stiff’ and told Sophie it lacked the ‘Spanish line’. Darcey told Sophie that she gave power she hadn’t seen her give to a dance before but told her the shaping of her arms was missing in parts. Len said Sophie interpreted the drama through her body and admitted he was pleasantly surprised by her performance. Bruno said the content, passion and intent was incredible and told Sophie she should be proud of her performance.

BBC Breakfast’s Susanna Reid was the next to dance with her partner Kevin Clifton. In the past couple of weeks Susanna has struggled to win over the judges but has survived on the public vote. She’s found it difficult to maintain the standard she set in Blackpool. Susanna’s first dance tonight was the Foxtrot which is a notoriously difficult dance to perfect. Did Susanna manage to get back in the judges’ good graces?

Darcey said she liked the story and told Susanna the technique was there. Len said it was a ‘lark in the park’ telling Susanna it was ‘terrific’. Bruno called Susanna ‘the nation’s sweetheart’ before telling her it was great. Craig said the dancing was ‘magnificent’.

Susanna and Kevin scored 38 out of 40 from the judges.

The last couple to dance in the first round was model Abbey Clancy and her partner Aljaz Skorjanec. Abbey has consistently impressed throughout the competition despite battling nerves. In her intro VT Abbey admitted she couldn’t believe she was so close to the final. For her first dance tonight Abbey was dancing the Samba. Did she continue to impress tonight?

Len said there were ‘so many wonderful touches’ and told Abbey she was a natural. Bruno called Abbey ‘sex on legs’ then stopped commenting saying he would get into trouble. Craig said he would have liked to have seen a little more bounce but told Abbey he thought she was amazing. Darcey said Abbey was ‘going flying into that final’.

Abbey and Aljaz scored 39 out of 40 from the judges.

After the first round of dancing Natalie and Artem were in pole position with full marks closely followed by Abbey and Aljaz. At the bottom of the leaderboard was Sophie and Brendan with 35 out of 40. Now all the couples had to dance again and this gave them the opportunity to climb up the leaderboard ahead of the public vote.

Natalie and Artem kicked off round 2 of tonight’s semi-final. The judges said that Natalie has been technically brilliant throughout the series but revealed that she needs to come out with something pretty amazing to get through to the final. Natalie’s second dance tonight was the Argentine Tango and she admitted that she needed to pull it out of the bag or she could be going home.

Bruno said he was astonished with the precision saying everything was ‘right on the spot’. Craig said he felt Natalie was taking the lead at points when Artem should have been leading throughout. He did say ‘what a dance’ though so it seems he enjoyed it. Darcey said it was very sensual for an Argentine Tango but admitted the end was ‘perfect’. Len said the Argentine Tango should burn and told Natalie she ‘sizzled’.

Natalie and Artem scored 38 out of 40 from the judges.

Patrick Robinson stepped back onto the dancefloor next with his partner Anya Garnis. He finished next to bottom during round 1 so he needs to pull something pretty special out of the bag to get a better score with his second dance. The judges said his energy was phenomenal and agreed that he understood how to get the character of each dance. Patrick’s second dance of the evening was the Paso Doble which is a challenging dance. Did Patrick climb up the leaderboard with his second effort?

Craig said it had ‘control and command’ but told Patrick there was no Spanish feel at all going on to reveal that it exposed Patrick’s weaknesses. Darcey agreed with Craig and said there was ‘grrr’ missing. Len said Patrick didn’t maintain the arrogance he needed but admitted he liked it. Bruno said Patrick had ‘great power and great determination’ but agreed that Patrick lost little details throughout.

Patrick and Anya scored 33 out of 40 from the judges.

Sophie Ellis-Bextor and her partner Brendan Cole were next to dance again tonight. For round 2 Sophie really needed to impress the judges after landing at the bottom of the leaderboard following round 1. The judges said she was ‘naturally elegant’ and admitted that Sophie’s Charleston was ‘a blessing and a curse’. Craig said he wanted to see Sophie ‘explode’ on the dancefloor to get through to the final. The second dance for Sophie and Brendan was the American Smooth. Could she pull out something pretty spectacular and sail through to the final?

Darcey told Sophie that the American Smooth was her dance calling her classy. Len said he loved the lifts, the musical interpretation and the dance throughout. Bruno said there was ‘so much style’ and called the dance ‘impeccable’ telling Sophie it was her best dance yet. Craig said he didn’t feel Sophie held her own out of hold but told her the dance was ‘full of style’.

Sophie and Brendan scored 36 out of 40 from the judges.

Susanna Reid and Kevin Clifton were the next couple to dance again. They really wowed in the first round with their Foxtrot but could they do even better with their second dance? The judges admitted they were wowed with Susanna’s Paso Doble but Craig said he felt Susanna struggled with some of the Latin dances. Susanna and Kevin’s second dance tonight was the Salsa. Could Susanna get a grip on her Latin for the semi-final and get through to the final?

Closing the show tonight was Abbey Clancy and her partner Aljaz Skorjanec. Abbey has led the pack throughout the series so far and her Salsa was a show-stopper. The judges admitted that she’d been a strong contender but said her nerves could be her downfall tonight. Abbey’s second dance tonight was the American Smooth and she admitted she was struggling a little bit with timing. Did she pull it all together?

Bruno said it was ‘another totally captivating performance’ from Abbey. Craig said it was ‘full of charisma’ and told Abbey he adored watching her. Darcey told Abbey she’s a ‘natural finalist’. Len said he’ll see Abbey next week in the final.

Abbey and Aljaz scored 39 out of 40 from the judges.

Tune into the Strictly results show tomorrow night at 7pm on BBC One and BBC One HD to find out which couple is going home. Check out pictures from today’s dress rehearsal in our gallery below: