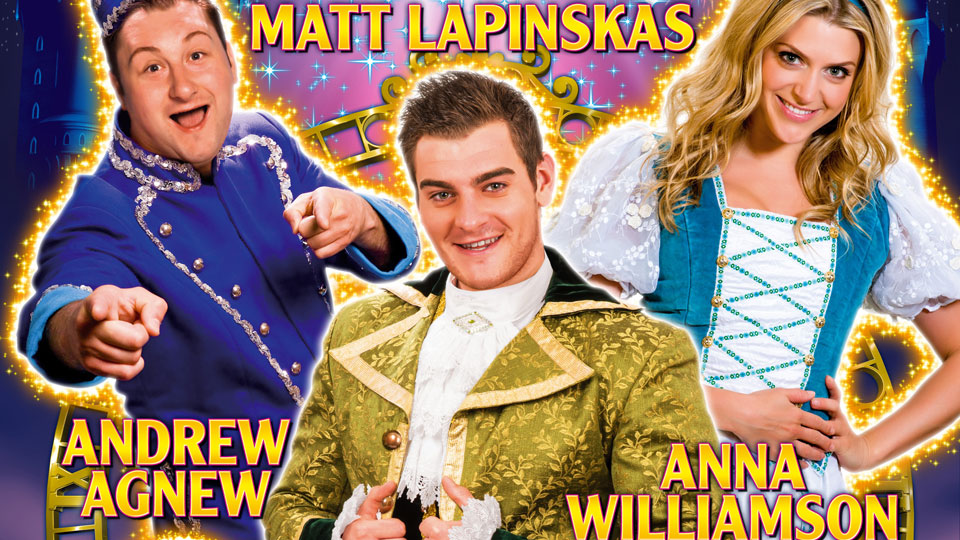 Playing at the Churchill Theatre in Bromley from now until 5th January is the annual pantomime: this year’s story is Cinderella. It’s a dazzling show that kids aged three to one hundred will adore. It features some big names from television, Shetland ponies live on stage and enough costume changes to give any actor a nervous breakdown. If you want family fun, spectacle, a raucous atmosphere and a Yuletide treat – look no further.

Cinderella lives a contented life until her father, Baron Hardup, becomes engaged and Cinderella acquires two step-sisters from hell – Daisy and Lily. A chance fleeting meeting with Cinderella in the forest leaves the handsome young eligible bachelor Prince Charming determined to find her. He contrives to throw a ball at the palace, inviting all the ladies in his kingdom, so that he can be reunited with Cinderella. One problem: there’s a limited supply of tickets (well, Prince Charming is handsome and, er, charming – you didn’t expect brains too?) giving ample opportunity for the Ugly Sisters to prevent Cinderella from attending the ball.

Within the framework of the traditional story of Cinderella, the panto bursts with other ideas from comic interludes to dance routines using contemporary pop songs (we discerned Taylor Swift and Ed Sheeran; One Direction, Ylvis, Ant and Dec and Michael Buble – don’t worry if you don’t recognise some of the names – the kids will know them all!)

From an adult point of view, the best thing about Cinderella is the Ugly Sisters, magnificently played by David Ball and Byron Mondahl. They’re even funny visually – one tall and slim, the other short and squat. Together they’re an absolute scream from start to finish and carry on the glorious British theatrical tradition of panto gender-bending, dishing out plenty of sass in Cinderella’s direction, and offering bucketsful of smut and double-entendres which will sail over the heads of the kids.

Charged with whipping the kids up into a frenzy is Andrew Agnew as Buttons. Kids will know him from Balamory. He has his routine of coaxing the children to participate down to a fine art, and his geniality makes him perfect for the role. Jessica Martin is an excellent choice for the Fairy Godmother too – whose magic wand is appropriately also a mobile phone these days. A former Spitting Image voice artist, she throws in some excellent impersonations along the way, including Cilla Black and Sharon Osbourne.

As Cinderella and her Prince Charming is Nickelodeon presenter Anna Williamson and EastEnders’ and Dancing on Ice star Matt Lapinskas. They make for an ideal fairytale couple on stage, with Williamson capturing Cinderella’s innocence and optimism, and Lapinskas epitomising charm and impressing with excellent vocals for the songs.

Running to two and a half hours (including interval), Cinderella provides non-stop magic for children, and the licence it grants them to be silly and to bawl their lungs out to the traditional pantomime set-ups will do the parents’ work for them in keeping their little ones entertained and then ready for bed – at least for one day.

The show is tightly directed (Alison Pollard) though the pace occasionally dips usually to provide time for some impressive set changes and one or two scenes arguably go on too long (though younger kids adore repetition and milked jokes). You won’t find any kids complaining about any of the content though. Overall Cinderella is enormous fun and a skilfully put-together panto.