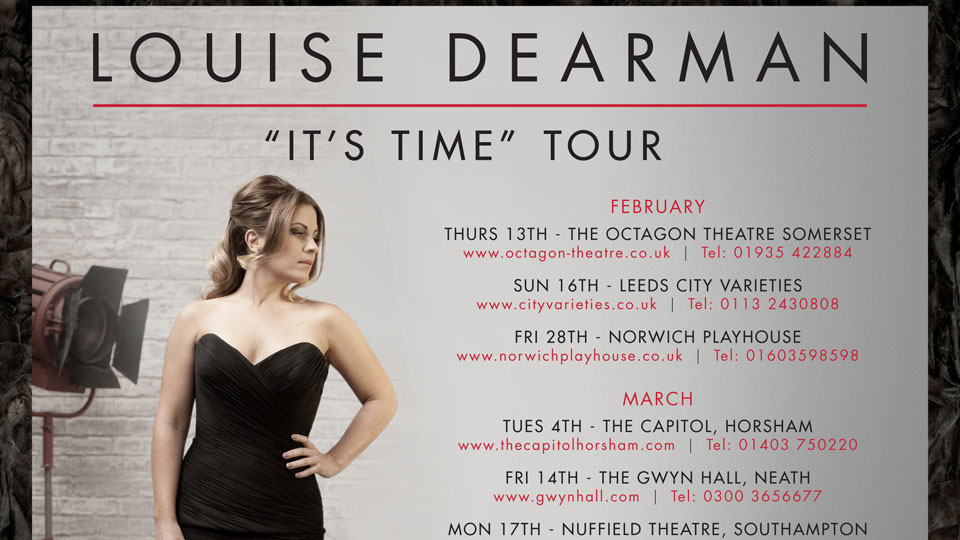 UK Concerts are proud to present the hugely talented Louise Dearman, who is the first actress in the history of the worldwide production of hit musical Wicked to have starred as both Glinda & Elphaba, for her debut UK Tour ‘It’s Time’.

The UK tour starts on 13th February 2014 in The Octagon Theatre, Somerset and finishes on 11 April 2014 in Courtyard Theatre, Hereford.

Louise will be performing some of her favourite musical theatre songs, live with her band, along with a popular selection of modern and classic showstoppers.

Louise Dearman is a widely known British musical theatre actress, who has built up a lucrative catalogue of performances both on national tours, in the West End and, in 2005, released her first album ‘You And I’ which featured 12 tracks from well known musicals. In 2012 she released her second album, ‘Here Comes The Sun’. Her third album, ‘It’s Time’ is released on Monday 18th November on Silvascreen Records. The album ties in with Louise’s exit from Wicked on 16 November 2013.

Not only has Louise taken the West End stage by storm, she has also collaborated with Mark Evans to launch a new book, The Secrets Of Stage Success, a guide for those who want to follow in Louise and Mark’s footsteps and develop their own career as performers.