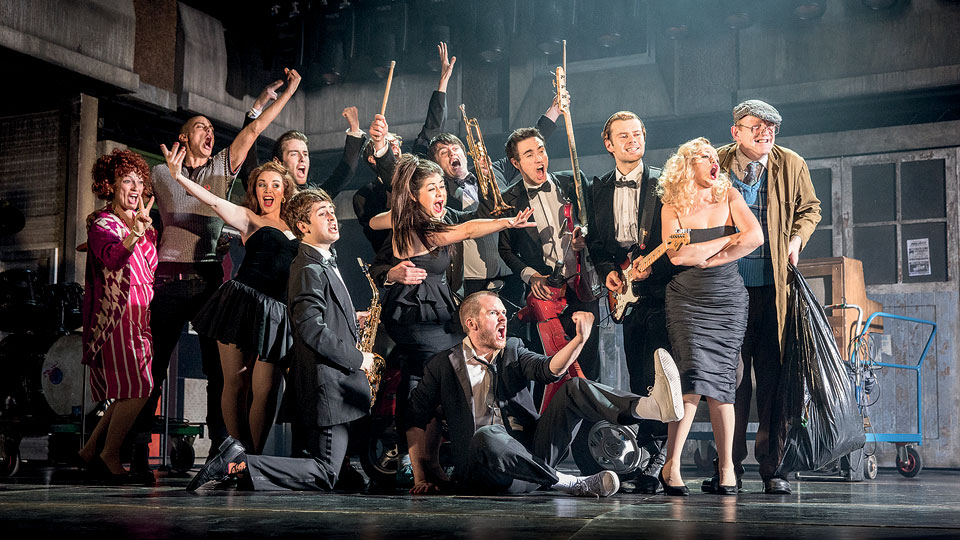 Roddy Doyle’s The Commitments was first published in 1987 and was turned into a film in 1991. Mixing music with social politics of the time, The Commitments has gone on to be a much-loved film with its soundtrack still living on to this today, particularly Mustang Sally. A musical adaptation of the novel was rumoured for a long time but Doyle reportedly turned the opportunity down several times before finally agreeing. Now the show is playing at London’s Palace Theatre so we went along last night to see if it lived up to all the hype.

The Commitments tells the story of ambitious Jimmy Rabbitte (Denis Grindel), a working class man who decides to put together an unlikely bunch of amateur musicians and friends to form a soul band. As Jimmy begins to shape the band tensions arise between lead singer Deco (Killian Donnelly) and the rest of the band which threatens to end it before it really begins. As the band members all start to head in their own direction, Jimmy tries to keep it all together to create the best soul band Dublin has ever produced.

After getting off to quite a hectic start with sets changing frequently and actors crowding the stage, The Commitments begins to find its feet when the band start to rehearse in the garage of Joey (Ben Fox) and the music takes over.  The story is fairly loose and the political undertones of the book and film pretty much fall by the wayside after the opening 15 minutes. What follows is a series of live performances strung together with very little more than a narrative guide. This means that character development goes pretty much out of the window and you feel more like you’re watching a concert than a stage production.

At the centre of it all is Killian Donnelly as Deco. His performance is nothing short of extraordinary as the strong-minded but deeply gifted lead singer of the band. It’s Donnelly’s superb voice that is actually the strongest aspect of the show as he pours his heart and soul into every performance he gives. He’s a fine actor too showcasing a good balance of intensity and comedy throughout. He is backed by the fine vocals of Jessica Cervi (Bernie), Stephanie McKeon (Natalie) and Sarah O’Connor (Imelda) with McKeon is particular getting to shine on some solo moments in the spotlight.

All of the supporting cast put in solid performances despite not getting too much in the way of character development. The in-fighting and bickering scenes are amongst the best in the show as the band members try to put their own stamps on what they’re doing. Ben Fox is great as the oldest and most experienced member of the band who romances the three female backing singers.

The one performance that didn’t quite work for us was Denis Grindel as Jimmy. The handsome actor looks the part but his performance is at times over-the-top with exaggerated movements and gestures. His constant shuffling and moving around with every part of his body is distracting. There was too much acting with his body rather than using his range to express the various feelings that Jimmy goes through.

Visually The Commitments is very impressive. Soutra Gilmour’s set is incredible inventive and surprisingly flexible transforming from a run-down block of urban flats to the inside of various venues throughout the show. We were really impressed with the way parts of the set opened up to reveal interior sets and the pull-out nature of Jimmy’s house was very inventive. Jamie Lloyd directs the show with gusto making the most of the large ensemble on the stage and not allowing the proceedings to lag for even a minute.

Of course we have to mention the songs. There’s a selection of incredible rock and soul greats throughout the show including Rolling Stones classic (I Can’t Get No Satisfaction) , Four Tops’ Reach Out I’ll Be There and Marvin Gaye’s I Heard It Through The Grapevine. There isn’t a dud in the entire show and the music is without a doubt one of the show’s biggest assets.

The Commitments is without a doubt a good night out. The music will get you on your feet and the vocals from the cast, particularly Donnelly, are fantastic. The band is tight and there’s plenty to enjoy. As a stage show it succeeds on the strength of its talented ensemble cast and the fantastic live music they perform throughout. Killian Donnelly stood out above everyone else and for us he absolutely made the show. We’re excited to see what he does next.