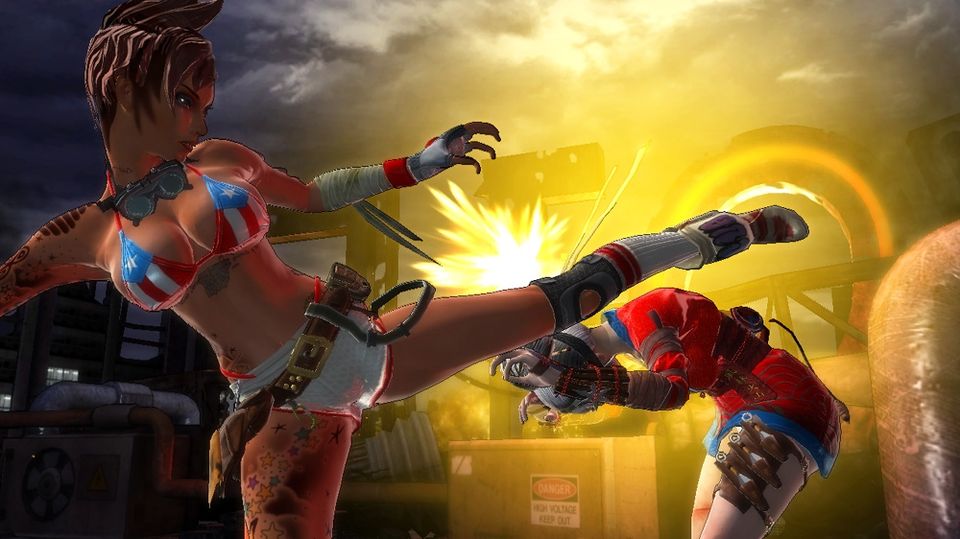 We’ve been treated to some incredible fighting games throughout this console generation and the next generation is just a couple of weeks away. By now developers have managed to squeeze virtually every drop of power out of the soon-to-be last generation. So surely we should be seeing a steady stream of fabulous titles? Sadly this is not the case with Girl Fight which is a poor game.

Girl Fight, available on XBLA and PSN, was developed by Kung Fu Factory (Spartacus Legends) and published by Majesco. It astounds us how anyone at either company thought this game was a good idea. In short it’s a game where skimpily clad girls fight each other.

If the name and focus on ‘sexy’ girls doesn’t put you off we’re fairly confident the story will. In an effort to explain why these girls must fight there is a bit of a story. A dodgy science organisation known as THE FOUNDATION has decided to try and weaponize the psionic fighting abilities of the girls. It does so by abducting the girls and plugging them into their virtual construct known as The Mainframe. To escape back to reality the girls must use their Psi Powers in a battle for survival.

Part of the appeal of fighting games is being able to choose the character you like the most. This often means picking one that suits your play style. Girl Fight does feature a small roster of 8 girls to choose from but initially you only have access to one of them – Warchild. To play another you need to unlock them by completing the game with each character. Forcing players to unlock everything seems to have been included just to try and prolong the life of the game. Unfortunately we feel most players will get bored and give up long before they do.

The combat itself is ok but quite limited. It features punches, kicks, throws and blocks as you’d expect and some simple combos. It’s nothing we haven’t seen before though and the depth you see in better fighting games is missing. The CPU controlled fighters encourage you to mix your attacks up by countering your combos if you stick to the same one. However it’s possible to get through arcade mode quickly without learning any controls and simply mashing the buttons. For those that like to learn the moves there is a simple training mode available.

The big feature that aims to make Girl Fight stand out is the addition of Psi Powers to combat. Before a match you can choose which of the unlocked powers to take into battle. During a fight you build us Psi energy that then allows you to activate these powers. It sounds interesting but we were disappointed how little effect these seem to have on a fight and found we could win just as easily without them.

During fights there are challenges that you can complete such as beating an opponent with punches or not using your Psi powers. Doing so rewards you with cash that you can spend on new Psi powers, background story and character skins. The game also features unlockable artwork which some players might like.

Once you’ve exhausted the arcade mode there is local and online multiplayer available. The game plays the same as in single player but fights can be a little more entertaining and far less predictable against a human opponent. We found online matches to be a little laggy at time but the biggest issue we had was finding someone to play against.

At the start of this console generation Girl Fight might have been good enough but now there are so many better fighters to choose from. The game is just a very average fighter that hopes to attract players by focusing solely on female fighters. Sadly there isn’t enough content or replay value here making Girl Fight a game that is very hard to recommend and not really worth your time.