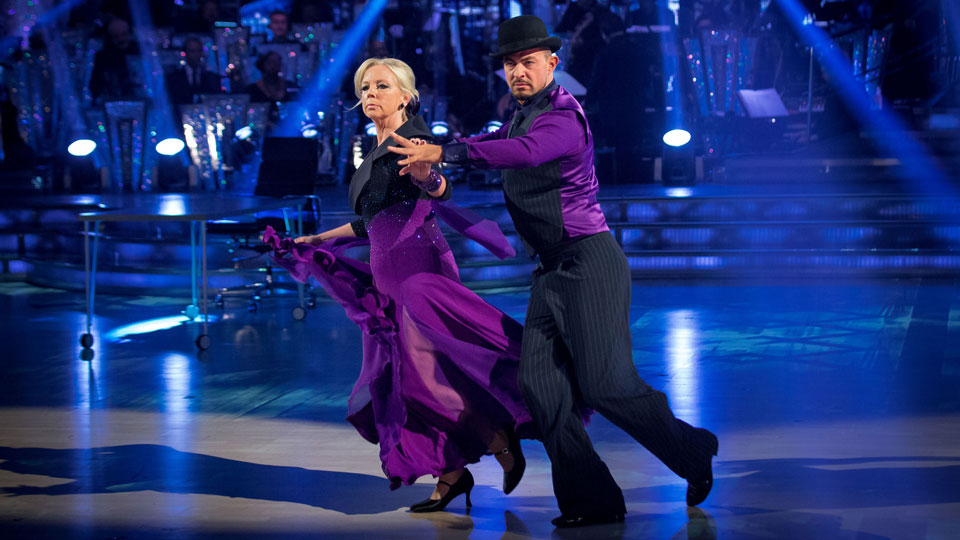 Last weekend Strictly Come Dancing served up its biggest shock of the series so far when Dragon’s Den star Deborah Meaden and her partner Robin Windsor left the competition.

Following Saturday night’s live show we had no doubt they would sail through so we, like everyone else, were incredibly shocked that the couple left so early in the competition.  What we will say is that just because Robin is out of the competition, it doesn’t mean we won’t be bringing any more weekly interviews after this week.

Now the shock has sunk in we had a chat with Robin to talk about all things Deborah, discuss their time on the show and find out who he’s rooting for now.

Sadly you and Deborah left Strictly during Sunday night’s results show. Did you expect that to happen?

For me Deborah’s the most improved dancer in the competition. We put out our best dance on Saturday night and it was the first time we both said to each other on Sunday ‘you know what, I think we’re going to be safe this week and not have to worry about it’. Unfortunately we were in a position on the leaderboard where notoriously couples don’t get voted for because people think they’re safe. I think because we put out such a good dance, viewers just thought we were safe. This happens every year about this time. Last year Kimberley Walsh was in the bottom two at this time and it’s the week that Jimi Mistry went home. Week 5 is always tough and unfortunately it was Deborah and I.

I found extremely difficult to contain myself and my emotions as we got voted off. It was more for Deborah’s sake than mine. She loved the experience so much. Deborah had always been one of these people that had to be the leader and had to be the strong one all the time. It’s the first time I think in her life that she’s been able to sit back and take instruction from somebody else, and just really enjoy it. She just loves Ballroom dancing and the fact that we were voted off at such an early stage has just been devastating for both of us.

When it was announced on Sunday that it was Patrick and Anya in the dance off, it seemed you and Deborah were resigned to leaving the competition. Would you say that was true?

We were the first couple to be put into the bottom two and we said to ourselves ‘depending on who it is that we’re in the bottom two with, it’s going to determine our fate’. As soon as Patrick and Anya were announced as the other couple we kind of felt a little bit defeated but we still went out there and gave it 100%. Deborah did it much better the second time around but unfortunately for the judges it just wasn’t enough for them on the night.

You injected a bit of Paso Doble into your Viennese Waltz and you took a big risk. Do you think it was the risk that ultimately didn’t pay off?

I’d taken a huge risk using the table and putting a brand new twist on the Viennese Waltz. The thing is, for Deborah to feel confident after last week’s Jive she needed something she was going to feel comfortable with. She absolutely loved the table-ography and the way that the number was created. It was exactly about her, who she is and what she does, and she thoroughly enjoyed it.

What’s even sadder is that we’ve had thousands upon thousands of messages on Twitter and Facebook saying that it wasn’t our time to go and people couldn’t believe this had happened. We know we can leave with our heads held high and we did a fantastic dance. We were just upset because Deborah had at least a few more weeks to go and she just loved the experience.

You know what, the people voted for who they wanted to go through. Whether it is people who do deserve or don’t deserve to go through, it is a public vote and they are the ones who decide who gets to stay and who goes. I wish everybody luck on the show. Everybody loves what they’re doing and has a great time. Some people bring the entertainment factor and that’s what some people like to see. I personally think they got it wrong this time but hopefully it will make people aware that they should be voting for their favourite to stay in the competition.

What normally happens after a shock exit is that the voting rights itself and the person that should have gone, goes the following week…

Exactly! It’s all down to the British public now who they want to keep. It’s not about necessarily keeping the best dancer; it’s about keeping their favourites. Whoever that may be I urge everyone to pick up the phone or vote online for their favourite.

Now that you’re out of the show, tell us how much impact it has on your life now you don’t have the intensive training week-on-week.

I woke up on Monday and still had to go to professional rehearsals so it was all a normal day, then all of a sudden everybody was going off to train with their celebrity and I wasn’t. I was quite lost. I will be there every Saturday and Sunday up until Christmas supporting everyone and doing the group numbers. I’ll be doing some stuff for It Takes Two and I’m sure I’ll be doing the Christmas special.

We hear that you and Deborah will still be doing some training even though you’re out of the show. Is that right?

Deborah has said that she doesn’t want to stop dancing but the thing is she will only dance with me.  She said, ‘once I’ve danced with Robin Windsor I’ll never want to dance with anyone else’ (laughs). I promised her that I would teach her a couple of the dances that she hasn’t got to do that she really wanted to do. Fingers crossed that we’ll both be part of the live tour in the New Year. Deborah doesn’t want to stop dancing, she loves it so much and I think being part of the live tour would be the perfect ending for her.

It was really sweet in the Goodbye Deborah video that the official Strictly site posted that Deborah said she didn’t want to lose you. It seems like you’ve got a really strong friendship now the two of you…

I said to Deborah about a week ago that it’s absolutely remarkable that two people from completely different walks of life can be thrown into the paths of one another and get on so brilliantly. Generally our paths would never have ever crossed and I’m so glad they did. We’ve made a very special friendship and we’re never going to lose each other. I think we both brighten up each other’s lives in different ways and I think we’ll be friends for a very, very long time to come.

And of course you’ve now got a free business adviser which is of course very, very handy…

(laughs) You could well look at it like that but I just see Deborah as a friend. Of course if I ever needed advice I’m sure she would give it to me.

Who are you rooting for now in the competition?

I think the standard this year is very, very close. I think you’ve got more front-runners at the moment with Natalie, Sophie, Abbey and Susanna. I’m saying this on a completely biased opinion because he’s my best friend in the whole wide world but I would love to see Artem be the only professional so far to have lifted that glitterball for the second time. He’s got a perfect opportunity with Natalie and for his sake I’d love for him to be the one to lift that trophy twice.

Strictly Come Dancing continues on Saturday night at 6.30pm on BBC One and BBC One HD. Watch Robin and Deborah’s final dance from last week below: