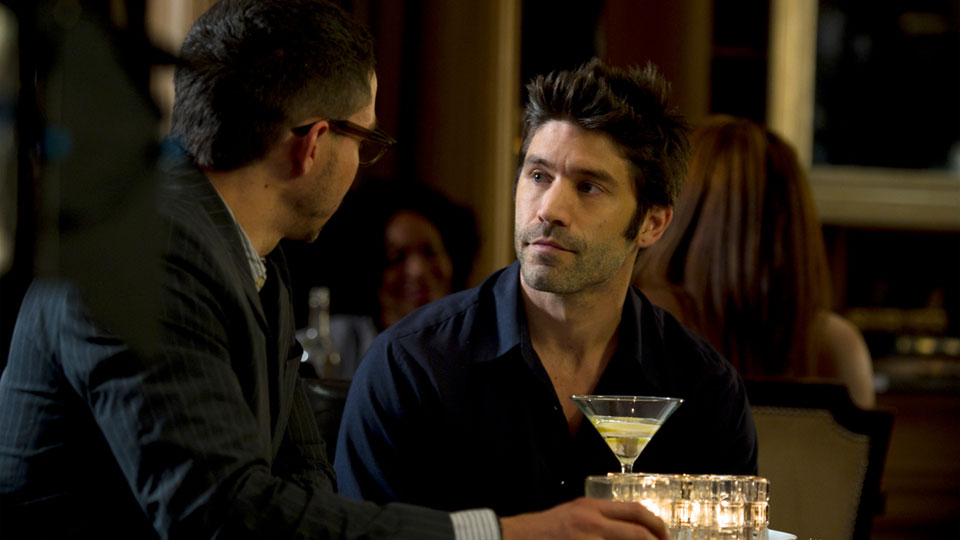 I Do DVD review

Jack Edwards (David W. Ross) is a gay Brit living in New York. Following a family tragedy he discovers that his immigration status is being revoked and he will have to move back to the UK. Desperate to stay in New York with his sister-in-law Mya (Alicia Witt) and his niece, Jack convinces his best friend Ali (Jamie-Lynn Sigler) who is a lesbian to marry him in order to get a green card. Things soon get complicated as the couple come under scrutiny from federal officials and Jack falls for Mano (Maurice Compte).

David W. Ross makes his feature film writing debut with I Do. The former Bad Boys Inc. singer has teamed up with Leave It On The Floor producer Glenn Gaylord to bring his timely story to life. I Do is an exploration of the inequality that LGBT people face and is particularly topical with the Defense of Marriage Act (DOMA) having recently had section 3 over-turned allowing same-sex couples to receive the same federal protections as heterosexual couples. For Jack he’s desperate to stay in New York near the family of his brother and will do whatever it takes.

The main conflict in the story is that between the triangle of Jack, Ali and Mano. Despite Ali agreeing to marry Jack putting aside her reservations, he doesn’t treat her with the courtesy or respect that she deserves. He sees that the marriage will give him ultimately what he wants and he continues to have relationships with men. Subsequently she feels abandoned and betrayed as she’s put her life on the line and could end up in prison if the pair gets found out. As Jack’s relationship with Mano intensifies, Ali is further cast aside causing friction between the best friends.

What I Do really brings to life is the idea that currently LGBT people have few choices when it comes to getting a US green card. The reality that Jack has to face up to is that without marrying a woman he has no way of staying in the country. If he were to marry a man his marriage would not be recognised and he would still have to leave the country. This dilemma causes further friction and you begin to realise what it is that Jack wants the most in his life.

Often the involvement of a boyband star in anything other than singing rings alarm bells but David W. Ross proves to be a real exception. Not only is he a talented actor, he is also a great writer and I Do is a stunning movie. He is completely believable as Jack and he proves he more than has the acting chops to pull off the rather complex role. He can hold his own against more established actors such as Alicia Witt, Jamie-Lynn Sigler and Grant Bowler. He really is the heart of the film and his performance is superb. Jamie-Lynn Sigler puts in a solid performance too showcasing impressive range as Jack’s put-upon best-friend Ali. We were also delighted to see Alicia Witt (we loved her in Cybill) back on our screens and hope this leads to more roles for her.

David W. Ross should chalk I Do up as a huge achievement that has helped raise the plight of LGBT people in our fight for equality. With a realistic storyline tackling topical issues, the film is one of the best pieces of gay cinema we’ve seen in 2013. I Do is a timely, relevant and compelling movie you simply must see.

Pip Ellwood-Hughes
Pip is the Editor of Entertainment Focus and the Managing Director of agency Piñata Media.
Previous article
New Husbands episodes to be released internationally
Next article
Interior. Leather Bar released on DVD in December