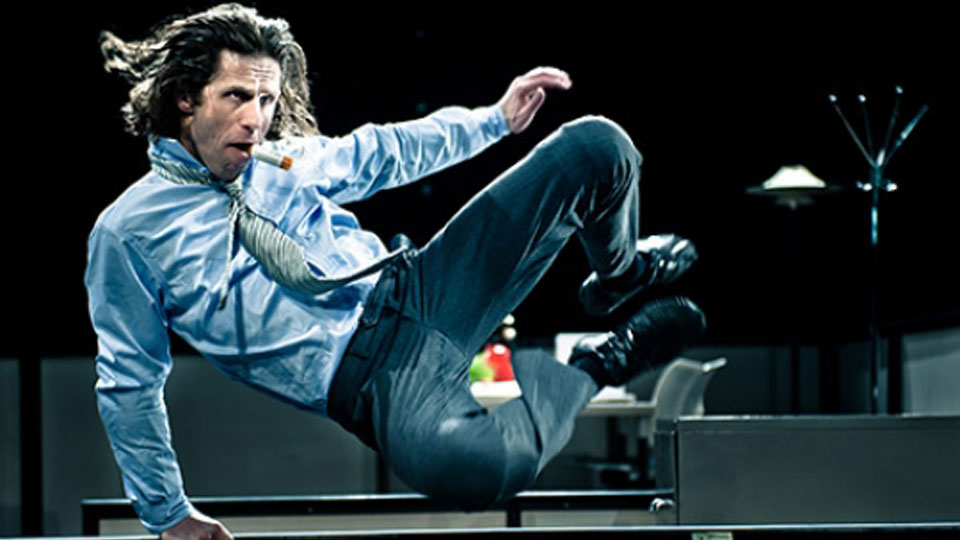 BLAM! is a production by Neander, who are a physical theatre company that has toured worldwide under the artistic direction of actor and director Kristján Ingimarsson. Following a run at this year’s Edinburgh Fringe, they now have a run at London’s Peacock Theatre. BLAM! is set up as your lower than average, dull, mundane office job, where there is very little personality on display and everything that happens is tedious and repetitive – until they decide to break free. For those of you who have ever had to work in such an environment, where any form of being unique or displaying your personality is forbidden, you will be able to relate to this show.

They actors set the scene of such a dull office job from the word go, with no banter, sitting behind their desks, with painful expressions and dead eyes. To be honest, the first five minutes were a bit painful to watch and the dullness of the setting transferred over on to the audience. However, things were about to change, as they decide to break free from such monotony and the four colleagues decide to invent BLAM!, which is an imaginary game, where your most trivial of office objects and life, suddenly come to life. Did you ever think that the water cooler could be transferred to looking like an octopus, complete with light-lamp legs?  The everyday workplace is transformed into a world populated by aliens, superheroes and classic blockbuster movie villains.

There is a lot of good stunts on display, some good parkour and lots of what we could describe as slapstick moments. We think that everyone planning on going to see this show, must understand that there is no spoken means of communication, therefore if you are a fan of silent movies and watching mime’s, then you will appreciate what BLAM! has to offer. However, for us, the lack of dialogue was really off-putting, if they had thrown in one or two jokes, it would have made the world of difference and there was plenty of times where a one-liner here and there would have worked a treat. Film buff’s will relish the opportunity to see where they have taken their inspiration from and will enjoy picking these parts out.

We have to say that we were looking for a lot more from the production, given that it was billed as a cross between Die-Hard and The Office. Sure, there were some witty moments and you could see the influence of certain things in the show, but there was a lot of things that we did not find amusing and certain aspects seemed to drag on. We definitely think that this is a show that you will either really love, or really take a dislike to. We found ourselves sat stony faced at times, whilst some around us where guffawing loudly. We found ourselves laughing at certain parts, whilst in other parts of the theatre, you could feel the tumbleweed. Although there are good stunts and a great deal of imagination is displayed, we just thought that it would be funnier than it was to be honest and felt slightly disappointed with the overall feel to the show. We feel like it would have worked better if the stunts came faster and if the production was a lot shorter, as 75 minutes of it, just seemed a bit too long.

Advertisement. Scroll to continue reading.
In this article:BLAM!