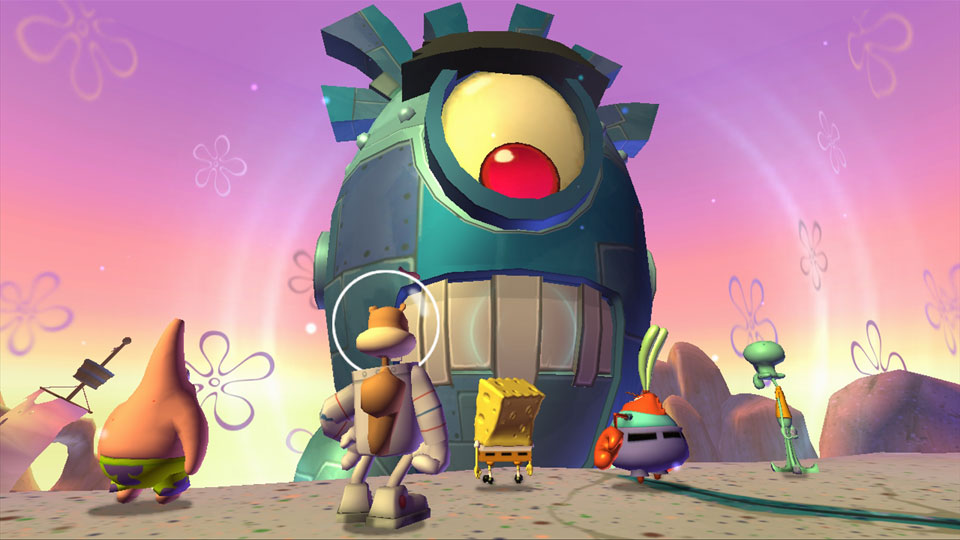 SpongeBob SquarePants has appeared in a variety of console games over the years, often with varying degrees of success. Historically the games have been released by THQ but now the franchise is part of the Activision family. The first title under the new agreement is the recently released SpongeBob SquarePants: Plankton’s Robotic Revenge. Has Activision managed to produce the best game based on the show yet?

Plankton’s Robotic Revenge begins in familiar territory for fans of the show. SpongeBob’s nemesis Plankton tries once again to steal the Krabby Patty formula and builds a huge robot version of himself to wreak havoc on Bikini Bottom. In order to get the formula he needs to find several keys that Mr Krabs has hidden around Bikini Bottom. Fear not though as SpongeBob, Patrick, Squidward, Sandy and Mr Krabs are on hand to get to the keys first and defeat Plankton once again.

So far so good but within minutes of playing the game you realise this is very much SpongeBob by numbers and disappointment sets in. After the initial cut-scene there is very little in the way of voice work from show’s actors, which leaves the game feeling very flat and at times incredibly quiet. Once you’ve accepted this fact you’re then forced to work through a fairly short game that is incredibly monotonous and lacks variety. The game contains four chapters with 6 levels in each and a boss fight at the end.

It’s hard to know where to start in terms of listing what’s wrong with this game. There is no degree of difficulty at all meaning it’s very easy to progress through the game very quickly. The robotic enemies, particularly the boss fights, don’t seem to be able to aim very well and we found spots we could stand without them hitting us whilst we attacked and destroyed them. Similarly the hovering robots that are omnipresent throughout the game are easily disposed of using your blaster which helpfully aims for you.

The environments are incredibly unimaginative and each level follows a very similar layout. At times we actually thought we were playing the same level over and over again. You can’t control the camera which means you’re forced to see what the screen wants you to see making it difficult to fully explore the environments. There are collectibles in abundance throughout the level making it very, very easy for you to power-up your weapons. We reached the maximum power-up by the second level of the first chapter meaning there was relatively little reason to both collecting them after that point.

On the plus side you can play any of the main characters from the show – SpongeBob, Patrick, Squidward, Sandy and Mr Krabs – but there isn’t anything that particularly distinguishes one from the other. Visually the characters look great and their likenesses have been captured and the environments, whilst repetitive and bland, do have the feel of Bikini Bottom. There’s an option to play with co-op with a maximum of 4 people but quite honestly you don’t need to make the game any easier for yourself by getting someone else to help.

SpongeBob SquarePants: Plankton’s Robotic Revenge is a disappointing quick-cash in on the popular animated series. Our hopes were high that Activision could inject some much-needed fresh life into the franchise but all they’ve done is pick up where THQ left-off. We get that this title is primarily aimed at kids but even they will become bored pretty quickly. SpongeBob SquarePants is one of the best-loved animated characters around and he deserves a much better game than this. If you’ve played any of the previous SpongeBob games then you won’t find anything new to play here. As big fans we’re incredibly disappointed.