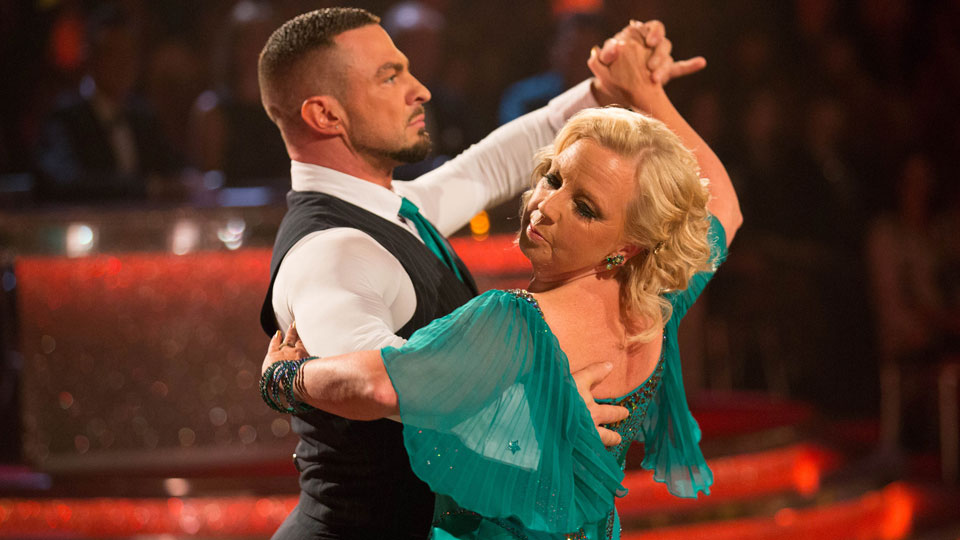 Strictly Come Dancing returned with a bang last week as the 15 couples danced their socks off in a bid to impress the judges and the audience at home.

The standard of dancing was amazingly high for week 1 and it looks like this year could be the closest competition yet. Our eyes were glued to the screen of course for Robin Windsor and Dragon Den’s star Deborah (Team DebWin) as they danced their first routine of the series.

We caught up with Robin to talk the Tango, discuss Deborah’s progress and find out what’s coming up this weekend on the show.

Last week you scored 24 for your Tango. How do you feel it went?

I was very proud of Deborah last Saturday night. It was her first dance and she was actually very, very nervous. It was weird to see someone who’s so strong and so powerful to be so nervous. She did such a fantastic job and we got 24 points from the judges which is very respectable. She did make a few mistakes in the middle but the one thing I said to her is ‘whatever happens please keep going’ and she did. She stayed in character and I couldn’t be any happier.

Craig even said he was ‘impressed’ and ‘surprised’…

I think everyone was expecting Deborah to be awful and I said to her, ‘I think the general perception is that you’re going to be really bad’. I think everyone was very pleasantly surprised that she came out and did a very respectable dance. She had a great time.

For week 1 the standard is already incredibly high this year isn’t it?

The standard this year is incredibly high. I’ve never seen week 1 have such a high standard of dance. It just means it’s going to make it a very exciting competition between now and Christmas.

Now you’ve seen everyone dance, who do you think your biggest competition is?

I think everyone is our biggest competition at the moment. It’s anybody’s game at the beginning. Hairy Biker Dave was just television gold and I think everybody fell in love with him just a little bit more last Saturday.

His performance was extremely special (laughs) and he just about loves what he’s doing. He entertained the entire country for a minute and a half.

Last week you teased us about the big pro dance that opened Saturday’s show. The routine was incredible. How long did it take to put all that together?

We put together that professional dance way back in August, it was the first dance we did, in about 7 hours. Everybody’s commenting and saying how it was one of the best pro dances they’ve ever seen on Strictly. Jason Gilkison choreographed that and he’s an absolute genius.

What are you and Deborah dancing on Saturday night’s live show?

We will be dancing the cha cha cha. I’ve found that Deborah is more of a Latin girl which I didn’t expect. She’s very sassy, she’s got lots of attitude for the cha cha, and I’m really, really looking forward to performing it on Saturday night. As long as she gets from the beginning to the end with no mistakes this is going to be a special dance.

If Latin is a better fit for Deborah does that mean she’s picking up the steps and the routine fairly easily?

Deborah has trouble picking up very simple steps. However she does find it very easy to pick up very difficult ones. She’s doing steps that me and Kristina would do which is absolutely fantastic. She also has a natural rhythm and to try and teach someone that is very difficult so it’s made my life a whole lot easier.

Karen has been using baking references to help Hairy Biker Dave remember his steps. Have you introduced any business speak in to your training to help Deborah remember hers?

Last question for this week, do we have another spectacular pro dance to look forward to this weekend?

We have a very different pro dance for us this week. It’s been choreographed by Gareth Walker, who did the closing ceremony of the Olympics. It’s slightly away from what we do as ballroom dancers so it’s a big challenge for us this week to actually do this routine. It is absolutely brilliant.

There’s not going to be any twerking is there?

No twerking no. I think at dinner time at the weekend twerking’s not appropriate for the BBC…or any other channel for that matter (laughs).

We agree! Just make sure Miley Cyrus doesn’t come on Strictly this year.

Strictly Come Dancing continues at 6.20pm on Saturday night on BBC One and BBC One HD. Watch Robin and Deborah dance the Tango during last week’s Saturday live show: