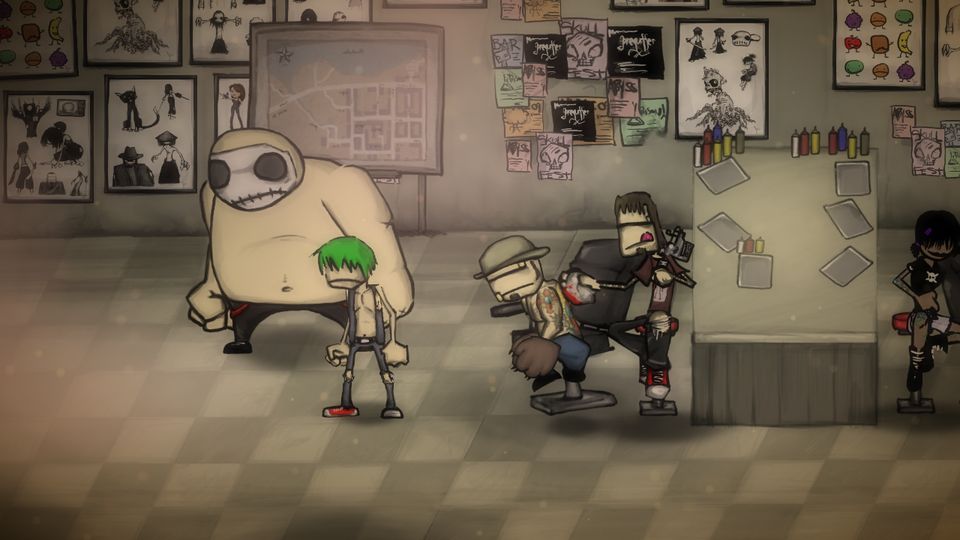 Charlie Murder is a side-scrolling beat ‘em up mixed with RPG elements from the two-person team at Ska Studios. The game was selected as one of this year’s XBLA Summer of Arcade titles and we’ve been keen to get our hands on it as we are big fans of their Dishwasher series.

The game can be played solo or with up to three friends in co-op either locally or online via Xbox LIVE. Each player takes the role of one of the band members who each have a RPG character class associated with them these are – Berzerker, Mage, Shaman, Tank and Mesmer. They do all play quite similar but you’ll still want to pick out your favourite class.

The core gameplay is a bit like a mix of old style co-op brawlers such as Double Dragon, Golden Axe and The Simpsons Arcade. There’s a brief help screen off the main menu that simply suggests mashing the X and Y buttons. However it’s actually a lot more involved than this and the game does have a kind of in-game tutorial to help you learn the other things you need to know as you go.

Each character carries a Windows Phone 8 handset with them which can be accessed via the D-pad. By a direction your phone handset appears on screen and Right Trigger can be used to zoom in slightly. We found at times the phone screens seemed too small which makes them hard to read. However it would have been tough to make them bigger without them taking up too much screen space spoiling the combat.

Tapping to the right opens up your emails which arrive frequently as you play. Each time you come up against something new an email will give you a quick tutorial on what you need to know. Tapping up accesses your Squ.iddl.us feed (think Twitter) and you’ll gain followers as you progress which act as your XP bar.

Tapping left allows you to spend ability and stat points. Each character has the same four stats – strength, speed, defense and anar-chi. Finally by tapping down you can activate your phone’s camera. This allows you to take snaps of whatever you like but in particular you will want to watch out for QR codes which turn into items.

There is a world map which shows your path through the game. The bulk of the levels are focused on combat where you spend your time fighting through short sections from one end of the screen to the other. There is a large variety of enemies and every so often you also come up against boss fights. The combat doesn’t feel quite as polished as in The Dishwasher games but it does work well.

Characters are moved with the left-stick with X and Y used for light and heavy attacks. The A button is used to jump and B can be used to grab during combos. X is also used to pick up objects and weapons while Y can throw them. Right Trigger along with the face buttons can activate spells and buffs. Later you can also gain abilities such as blocking, head stomping and soul stealing.

As you defeat enemies the game showers you in loot in the form of new clothes and weapons. The different clothes are just like armour in RPGs and each item has its own set of stat bonuses. The weapons can only be used for a short time each so it’s personal preference whether you go for a ranged or melee weapon. Plenty of objects including enemy heads can also be picked up and thrown. With loot dropping frequently you need to often spend time messing on your in-game phone to ensure you have the best items equipped.

As neat as the phone idea is it does get a little annoying especially with multiple players. It can spoil the flow of the game at times as you wait for a party member to tinker with their items. Another area that feels like it needs work is the checkpoint system. The checkpoints are quite far apart which can force you to replay a large section if you die. One reason for this seems to be to help you level up higher in preparation for the tougher parts of the game towards the end.

To help keep things interesting the game makes use of short stages but throws in plenty of variety. One moment you’ll be fighting on foot then the next you might be riding a flying broom high above the clouds carrying an Uzi whilst being chased by a giant robot. There are also some difficult musical mini-games are similar to games like Guitar Hero. In between the action there are plenty of shops to visit including those where you can brew your own beer, buy new items and gear or even get a tattoo. Tattoos give your character new spells that they can use.

Graphically the game uses a similar kind of aesthetic to The Dishwasher games which looks wonderful. It’s very cartoony and a lot of fun. For players who find the blood a little too much there is an option to change the red blood to green. If you enjoy rock music you’ll absolutely love the soundtrack which features plenty of brilliant songs to keep you entertained while you play.

Charlie Murder is another brilliant game from Ska Studios that is fun alone and even better with friends. The combat does get a little repetitive but there’s enough variety in the gameplay to keep you entertained. If you enjoy beat ‘em ups and RPG games then you should definitely give it a shot.

Greg Ellwoodhttp://www.entertainment-focus.com
Greg is the Deputy Editor of Entertainment Focus. He writes about Games, Tech and TV. You can find him on Xbox/PSN/Steam as Tahllian.
Previous article
The Raven Chapter 2 Ancestry of Lies now available
Next article
Volvo Trucks tease new stunt #TheHook