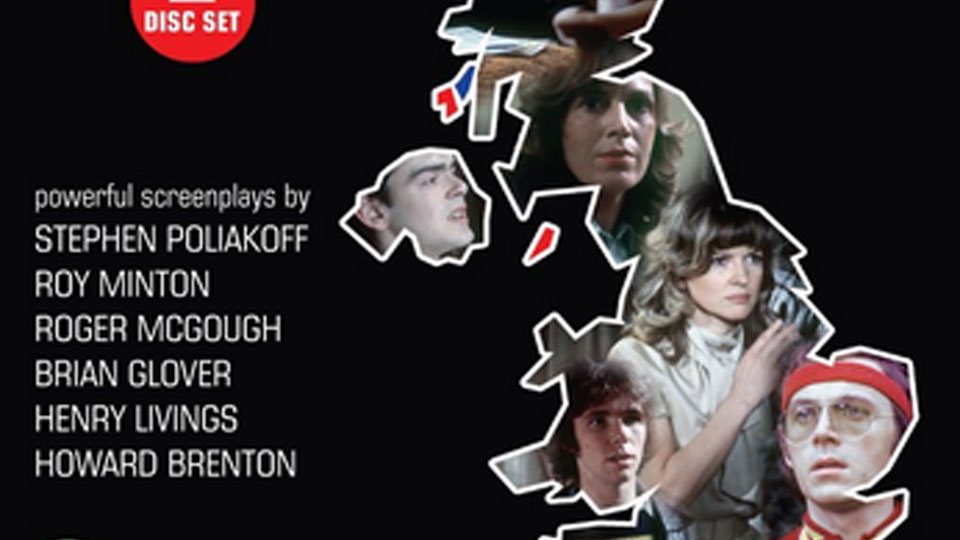 The release of Plays for Britain, a collection of six standalone episodes from the 1976 serial, includes the early work of a number of actors, writers and directors who would go on to become hugely influential in their respective fields.

The bizarre title sequence, which depicts a stereotypical Daily Mail-reading couple bemoaning the state of the UK, was itself shot by Mike Leigh (Abigail’s Party, Secrets & Lies). It establishes the off-kilter tone most of the plays adopt, as well as the (admittedly very loose) umbrella theme of encapsulating the changing social attitudes of Britain in the mid-1970s.

The series starts brightly with The Paradise Run, a play by Howard Brenton. It’s by one of Britain’s top directors, Michael Apted (7 Up, Gorky Park, Gorillas in the Mist). The story concerns a simple-minded young soldier, Johnny (the first of many screen appearances by Kevin McNally – you’ve seen him in everything from I, Claudius to the Pirates of the Caribbean movies) who joins the army because he enjoys canoeing. His misguided motives leave him struggling to cope when stationed in Northern Ireland during the Troubles, and his tenuous grip on reality proves a challenge to his CO, Henry, played by Ian Charleson. There’s also a very brief appearance by the late Pete Postlethwaite, though fans of the actor keep your expectations low: it’s a fleeting one-scene two-line role.

Whilst the story takes on a surreal slant, the stark setting and great performances give it an edge. It’s a reminder of what a sad loss Charleson is, his early death cutting short a fine career. To be ultra-critical, his cut glass accent occasionally slips into his softer Edinburgh lilt here: but as a young soldier pushed to the limit of endurance he’s wholly convincing. McNally hits the ground running too. As Johnny he conveys wide-eyed innocence but marries it with more than a hint of madness. Let’s just say you’re never quite sure what’s going on inside his head, or which side he’s even on. The location sequences are mostly shot on tape (rather than film) for this one, enabling Apted to capture a documentary style evocative of newsreel footage of the time – when contemporarily the situation in Ireland was bleak. The Paradise Run is easily one of the strongest pieces in the series.

The second instalment is a darkly comic play by Liverpool-born poet Roger McGough. The Life-Swappers (a surreal take on ‘wife-swappers’) sees two mismatched husbands changing places. It has in its favour a razor-sharp script and Peter Egan looking ravishing in drag. With an appearance by Miriam Margolyes as Egan’s cookery-crazy wife, and sequences that look like the product of Dennis Potter’s worst ever bad cheese dream, The Life-Swappers has to be seen to be believed as it defies easy summary. It’s slightly nauseating yet very, very funny.

In stark contrast, Sunshine in Brixton brings the series back down to earth with a slice of real life, kitchen-sink drama about racial tensions in the London borough: prescient, since it was made five years before the Brixton riot of 1981, and indicative of how much Plays for Britain had its finger on the pulse.

It’s written by Brian Glover, the actor whose Yorkshire accent and bald head were readily identifiable in his numerous performances (he will always be Sugden, the PE teacher in Ken Loach’s Kes, to me). It sees black teenager Otis (Elvis Payne) finding a new lease of life when he unexpectedly starts to play football for his school. It’s a beautifully nuanced script, with the last few minutes a powerful emotional punch that faces the subject matter without flinching. The racist language makes for uncomfortable viewing, but there’s no mistaking where the audience’s sympathies are supposed to lie. Director Les Blair brings the best out of his mostly young cast, some of whom went on to become familiar faces on British television and film, amongst them Ray Winstone and Richard Willis.

Hitting Town is from the pen of one of Britain’s leading television writers, Stephen Poliakoff (Shooting the Past, Perfect Strangers), and it concerns incest between a brother and sister – a theme he would return to in Close My Eyes a decade and a half later.

Although in his mid-20s at the time it was written, Hitting Town is still identifiably a Poliakoff work, bearing his hallmarks of heightened reality in situation as well as dialogue. The brother and sister are played by Mick Ford (Scum) and Deborah Norton (Yes, Prime Minister) and the action takes place over the course of a single evening. Ford’s performance, whilst a touch irritating after a while, is fun to watch, and carefully presages the darker turns the story takes. It arguably doesn’t satisfactorily resolve the issue of incest that it raises, but since it tells a coherent story it’s hard to feel too short-changed.

Fast Hands is possibly the least-engaging story in the collection, following the exploits of a young boxer (Bill Buffery) who comes to be exploited by less than scrupulous agents and managers. It’s mostly notable for its collaboration between director Alan Clarke and writer Roy Minton, who would go on to create the landmark British film Scum not long afterwards. Their documentary-style is infrequently in evidence here, and it’s a signifier of things to come.

The final instalment, Shuttlecock, takes a while to come to the boil, but when it does it examines a dark story of child abuse, presumably to point out that violence against children occurs even in middle class households. It features a truly repellent performance by Dinsdale Landen as the abusive step-father. He is chillingly good in the part and doesn’t hold back from turning his bluff military-style caricature into a frightening grotesque. It’s directed by Philip Saville (Boys from the Blackstuff, The Life and Loves of a She-Devil) and retains the power to shock.

The six episodes vary in length between fifty minutes to an hour. There’s a small variation in quality, though all instalments are well worth a look and make for rewarding television, since the wealth of talent involved ensures that even on a limited television budget, these stories look as good as they possibly can and resonate as skilfully-crafted dramas. A few of them achieve excellence.

The transfer to DVD is OK, but there is some fringing around the image in parts, and the colours in the 16mm film sequences are very washed out, so it doesn’t look any better now than it did in 1976. It also retains the ad break signifier in the top right-hand corner of the screen: nostalgic for anyone above a certain age.

Plays for Britain will find a natural and keen audience in fans of archive British television, especially thanks to the major talents involved on both sides of the camera throughout all six episodes. It stands up as a fine example of TV excellence of the era. Plays for Britain assesses pressing social concerns and the shifting culture of the time unflinchingly and with credibility. A buried treasure, it’s great to see the series unearthed for the archives and enjoying a new lease of life on DVD.

‘We Joined the Navy’ Blu-ray review

An Audience With The Goodies – DVD review