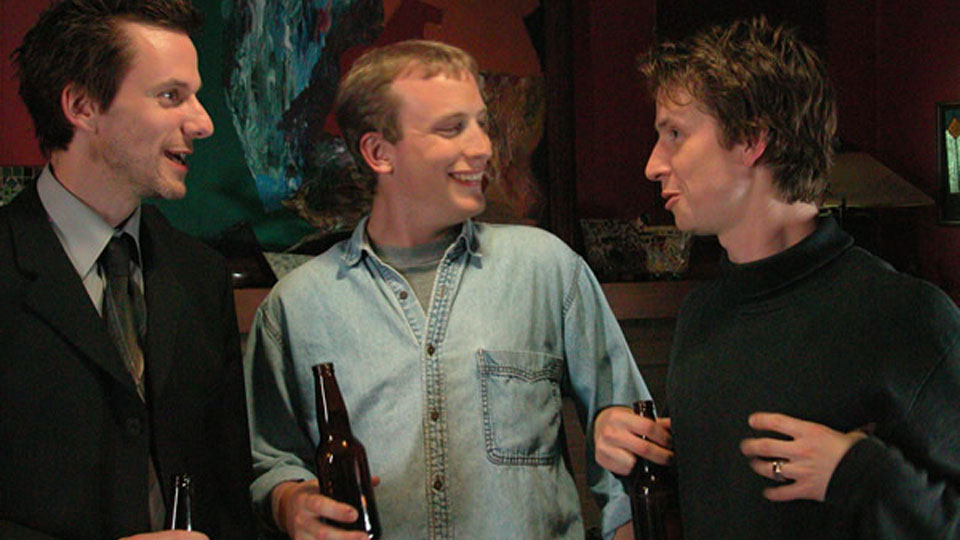 With equal marriage at the forefront of politics at the moment, we’ve chosen a classic gay film that was ahead of its time. Gay marriage has only just been passed in the UK and is only legal in a handful of states in the US so it felt timely to revisit Bill Marchant’s 2004 film Everyone. This month’s Celluloid Closet explores the wedding themed movie and remembers a little-known classic.

Everyone takes place on the day that Ryan (Matt Fentiman) is supposed to marry Grant (Mark Hildreth). To everyone else they seem to be the perfect couple but it soon transpires that the two men may not be as ready to take the next step as they think. Over the course of the day we see the impact the impending wedding has on the invited guests as well as the grooms.

Ryan gets cold feet on the day and begins to question if he should be marrying Grant. You quickly realise the idea was much more Grant’s than it was Ryan’s. They are indicative of a couple who move to the next step because they feel they should rather than because they want to. As the film progresses it becomes clear that maybe Grant is equally as unready to marry as Ryan when he catches the eye of mysterious guest Dylan (Brendan Fletcher).

The supporting characters all have their own issues. Gale (Michael Chase), Ryan’s brother, is dealing with an alcohol addiction and the breakdown of his marriage to Trish (Suzanne Hepburn), Rachel (Cara McDowell) is desperate to get pregnant but is having trouble conceiving, and Jenny (Anna Williams) is mourning the anniversary of her baby’s death. There’s also Shepard (Bill Marchant) who is struggling to cope with the death of one of his child patients who he believes he killed during surgery.

With all these issues floating around it’s clear that the wedding isn’t going to go the way anyone expected but what it does do is make each of the couples address their problems head on. In the background of it all is Ryan’s over-bearing mother Rebecca (Katherine Billings) who charges round the house organising and decorating everything.

What we particularly liked about Everyone is that the relationship troubles experienced by the couples could be applied to pretty much any couple. The majority of issues aren’t exclusive to just straight or just gay couples. Infidelity, alcoholism, cold-feet, doubts and grief are present in many relationships. Ryan and Grant aren’t treated any differently than a straight couple and we felt the representation of their relationship was pretty realistic.

Everyone is a surprisingly effective little movie that you should check out. As an exploration of love and marriage, the film offers a realistic portrayal of the issues, hurdles and problems that can be faced by couples, gay or straight. The performances are strong with Brendan Fletcher stealing the show as Dylan and a small role for Popular actress Carly Pope. Bill Marchant crafted a great film when he made Everyone and it’s one whose meaning will still be relevant for years to come.

Everyone is available now on DVD through TLA Releasing.

Advertisement. Scroll to continue reading.
In this article:Bill Marchant, Everyone, TLA Releasing