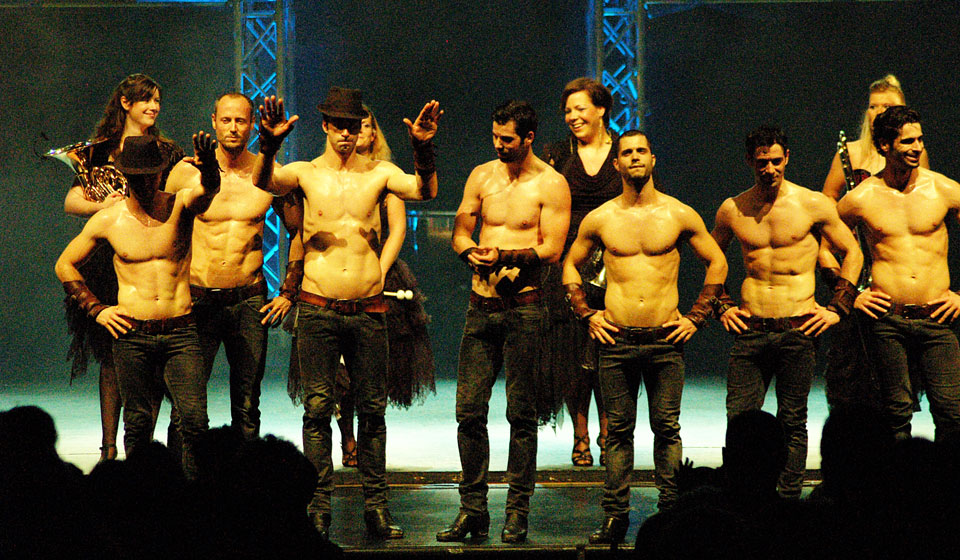 This show is dubbed as being a wild mix of extreme flamenco, martial arts and tap dancing all rolled into one show, showcasing the talents of seven sensational brothers. We have just seen the show and we’re really not sure where to start, as there is just so much going on in this show and so much that we could talk about! These guys know their craft inside out and have mastered the art of perfect movement, completely in sync with each other and the result is spellbinding. Enormous trepidation built up, before they came to the stage, with the Coliseum crowd chatter being drowned out by the dramatic, ambience inducing powerhouse music. Think of a dramatic operatic show, meeting a rock band at a party and setting the music on fire – this was the opening and from there on the show continued to be a mesmerising.

The seven brothers came onstage, wearing what can be described as white hooded Jedi/nun type outfits, with bursts of light flickering all over the stage. They descended from the heights of which they entered the stage and onto the floor, with feather-like elegance. From here, followed 20 minutes or so of a dark good vs evil themed story, based around tap dancing with gliding ballet movement thrown into the mix. We did get a little worried for a moment that the entire show was going to be dark and a bit like watching a spooky film on stage, but this was not to last. Although the footwork was incredible, for us, we would’ve liked to have seen a lot more joy in the opening half, as it really set the tone and we felt a little uncomfortable at times watching it, perhaps this was because we really weren’t expecting to see so much darkness! The posters for the show was of seven men smiling, looking amazing and having the time of their lives! A lot of people would pass this off as being ‘art’, but for us – it was a little on the creepy side!

There are some really incredibly impressive parts to the show, particularly the parts involving balance in particular, as is displayed during the amazing box scene and another time by doing the splits, balancing on a metal frame, whilst playing a violin in mid-air! Not only can they dance, but they are also musical and also incorporated the flute and violin playing into the set. For us, the final part of the show is probably the best and also the most fun. The sight of seven men with perfect six packs to say the least had the audience wolf whistling and cheering!

They become blind folded and find their way around the stage by listening to each others tap dancing and with only an arm widths length for judgement. Their energy from start to finish really is fantastic. Not for a second did they lose sight of giving the audience an incredible show. They also seemed to love the attention from the men and the ladies in the audience when they appeared naked from the waist up and they looked like the dream boys had come to the Coliseum (in the most tasteful way!), they are incredibly handsome and they have gladiator-esque stunning physiques. Fireworks exploded from the top of the stage and the energy and atmosphere in the room reached its zenith.

The dancing we witnessed during this show is nothing short of spectacular and first class. You would be hard-pushed to find a harder working group of dancers of performers. They really did give their all into the show and after a somewhat spooky first half, we were treated to a joyous second half, which really lifted everyones spirits. The standing ovation at the end of the show is clear sign that this show is an incredible winner.