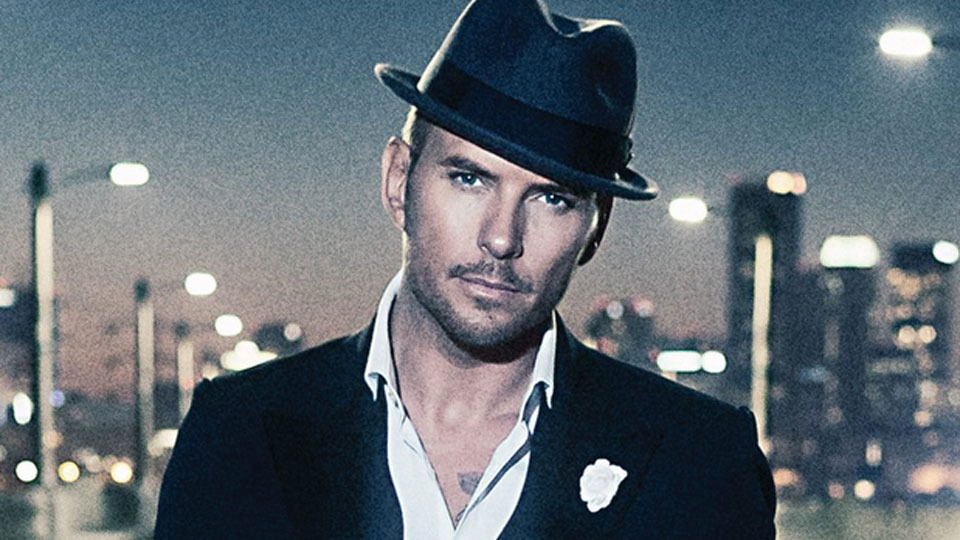 Matt Goss first found success in the music industry as part of the popular band Bros, in the late 80’s. Since then, we have seen him grown from a young man, to a suave man, someone who has gone through plenty of up’s and down’s and someone who has overcome obstacles to now come out smelling of roses! Matt’s fans have stuck by him throughout his journey, up until the present day, where he continues to charm new fans.

Matt’s residency show at Caesar’s Palace in Las Vegas has receieved glowing reviews from all that have been to see the show and after seeing his show for ourselves at Cafe de Paris last week, we can finally understand what all the hype is about.

We were completely impressed with everything that Matt and the show had to offer, it was slick, romantic, fun and Matt was totally at ease on stage and he was a joy to watch. We caught up with Matt to talk about his Vegas residency, what it’s like to be voted as one of LA’s most eligible bachelors and we found out more about his next album, which will be released in October.

The theme for your show at Café de Paris felt very much luxurious and glamorous, even the napkins were embossed with your initials on them in gold! What is the feel of the show at Caesar’s Palace, is it pure opulence?

The thing I notice nowadays is that people dress up to come and see me sing. I want people to understand one thing, I consider it an honour that men decide what shirt, suite, tie, and aftershave to wear and the ladies decide what dress, what necklace, what earrings, what shoes and what perfume to wear. Sometimes I imagine the whole process of two strangers engaged in a lovely ceremony of getting dressed up, so when I go onstage every night I have a sense of responsibility and respect to sing to them from my heart.

What is the best thing about having a residency at Vegas and the legendary Caesar’s Palace Hotel?

Caesars Palace is Vegas. Caesars Palace is the mothership so to be a headliner there I take great pride and care to represent the executives and staff that I have become my friends, not to mention the iconic history that those four walls represent.

We hear that your show’s contract has been extended at Caesar’s Palace, how long do you intend to go on with the show for?

I’m a Caesars boy and I am proud to be. It’s my home and I have no intention of leaving anytime soon.

What make you want to get involved in singing the style of the old Vegas rat pack and have you always been a big fan of that style of music?

I’ve always loved many eras of fashion; 20’s 30’s 40’s 50’s and early 60’s, there are pieces from all those eras that I pull from. My Granddad would always sing Nat King Cole and Frank Sinatra songs to me throughout my life. Those songs and melodies have a sense of effortless magic and wonder to them and usually accompanied by an unashamed romanticism that resonates within me. To be able to sing songs that have a masculinity with a passionate swagger every week at Caesars Palace and across the world at venues like the Royal Albert Hall and my most recent performance at Café De Paris for the press is a blessing. Many a night I’ve looked into the spotlight and sing to my Granddad.

Do you live in Las Vegas itself, or fly in from LA – where are you normally based?

I live in LA and fly in to Vegas for my shows. I never do less than a hundred shows a year.

What do you miss about the UK whilst you’re living in LA?

I miss the overall sense of me understanding my country and my country understanding me. The understanding that they know I’ve been through ups and downs and there’s almost a sense that there’s no need to explain after many years of staying in this industry, that music is truly my calling. I also miss a good curry and pint with my mates.

You have been voted as one of LA’s most eligible bachelors, how do you feel about that?

It’s obviously a complement. I’m a very confident man but, I have just as many hang-ups as anyone else.

If we were to go on a date with you in Vegas, where would you take us?

I can’t say, but it would involve dinner and breakfast.

We have heard that we can expect a new album to be released from you later in the year, at what stage are you at with the album?

The album is completely finished. It took over two years to make, it has over a hundred musicians on it and will be released on October 7th. It is available to pre-order now, through Decca Records, the album title is Life You Imagine.

We loved all the songs at your Café de Paris show, but in particular we loved Strong with the amazing gospel choir and we think that Evil is the ultimate break-up song. Do you have a favourite?

First of all, thank you. But, my favourite song to sing on the album is Mustang, not only because it was the first song I wrote on the album but manly for me it defines what love means in regards to the freedom and trust you must let live within a loving relationship.

You wrote I Do, with the view in mind for people to propose to the song to. Have you had any lovely stories from people who have done just that to your music?

Every day, I receive messages and letters from fans all over the world that my music has got them through so many situations, both good and bad. Most recently, I Do was used by Brides Magazine in America with an eight million readership for their online dream wedding, where the bride walked down the aisle whilst I sang I Do. I was told that we received nine hundred million impressions.

When can your UK fans expect to see you performing for them in the UK next?

I’ll be back in the UK in September. We are currently working on dates for the live shows.