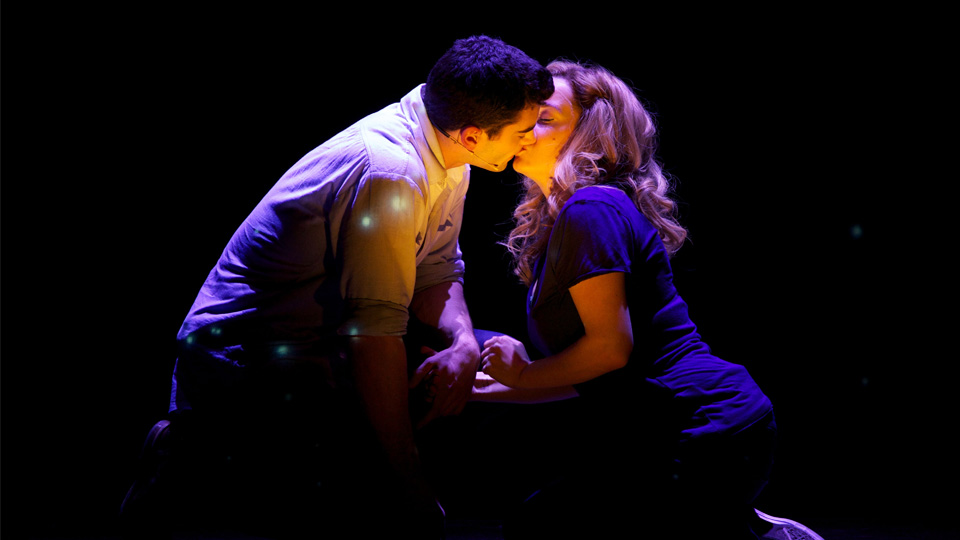 The Leeds Grand Theatre is home to Ghost The Musical for the next fortnight. Based on the hit 1990 film starring Patrick Swayze and Demi Moore, the story follows the plight of Sam Wheat after he is gunned down in front of his fiancée, Molly Jensen. Trapped in limbo between heaven and hell, Sam begins to haunt his murderer and uncovers a plot which threatens Molly’s life. With no means to affect change in the living world, Sam takes charge of reluctant psychic Oda Mae Brown to help save the love of his life.

The original film is classic schmaltz, with a large and dedicated fanbase. It is perhaps considered cheesy by today’s standards, brimming full of clichés and romantic stereotypes, but in many ways Ghost defined the clichés which were to follow and left an indelible gallery of iconic imagery;  The Righteous Brothers’ Unchained Melody, dubbed over an eroticised spinning potter’s wheel, is parodied as much as it is celebrated. However, beneath the pulpy romance is a story of adventure and comedy, elements which Ghost The Musical greatly capitalises on.

Bruce Joel Rubin’s book is a fast-paced distillation of the original concept and provides a narrative which rips along, carefully punctuated by musical numbers which further the story and enrich characterisation. The opening scene of two lovers moving into a new flat, however, is somewhat cringe worthy and the actors seem a little uncomfortable with the soapy dialogue. Luckily the drama quickly improves as the story takes shape, developing a plot which is adventurous and comedic.

Music by Dave Stewart and Glen Ballard has a strong Broadway feel, perhaps due to the New York setting. There are plenty of thundering numbers and operatic power ballads which impress in the moment, though many fail to resonate and soon slip from memory. Unchained Melody also runs as a theme throughout the show, woven through simple guitar riffs to radio broadcasts and solos, evoking the movie and no doubt pleasing fans.

Ghost The Musical is probably one of the most technically advanced musicals on tour today. Setting a benchmark in modern stagecraft, the show pioneers advanced motion-controlled video surfaces and front projection, creating rapid changes and graphical montages which give many of the songs a music-video feel. The technology is also meticulously choreographed with dance routines, providing audiences with an ever-changing vista of locations and artwork. The setting of New York and its subways, with evocative sound design, is a particularly extraordinary achievement. Real-life scenery is also utilised and lit traditionally in dramatic scenes, balancing spectacle and intimacy perfectly. The show’s presentation can be likened to a stadium concert in terms of scale and design and will astound the uninitiated who have not visited the theatre in recent times.

The problem with any show adapted from an iconic film – and there are plenty at the moment – is the inevitable comparison between performers on stage to those from film (who are often considered definitive). Fortunately Ghost The Musical doesn’t attempt to imitate Swayze nor Moore; Stewart Clarke as Sam comes across as a vibrant young professional or recent post-graduate whilst Rebecca Trehearn’s Molly is far less elfin-like or fragile than her Hollywood counterpart, providing a robust energy to the character.  Both boast impressive vocal talent, pushing the numbers into a genuine Broadway standard of operatic proportions. Supporting characters are equally effectual, with David Roberts and Ivan De Freitas providing an agreeably arch nastiness in their roles. Without doubt, Wendy Mae Brown steals this show in the character of Oda Mae Brown – a sort of mixture between Chaka Khan and Whoopi Goldberg. From her absurd gait to the constant bickering and backbiting, she’s a complete pleasure to watch and her show-stopping Las Vegas number is also one of the finest in the production.

Ghost The Musical is a mixture of experiences, each which will appeal to demographics in the audience. The visual effects on stage not only mirror the movie, but also improve upon them through sheer live spectacle. Great illusions from Paul Kieve, with impressive distraction and substitution techniques provide a cinematic quality on stage. Audiences will believe ghosts can walk through walls and fly over buildings. Whether or not the content is genuinely moving on an emotional level depends entirely on the viewer; I remained distracted and impressed by the staging whilst others, mostly mothers and daughters, were weeping in the closing moments. Either way, Ghost The Musical succeeds in entertaining, astounding and absorbing audiences and for the price of a ticket provides more theatrical spectacle than several musicals combined.